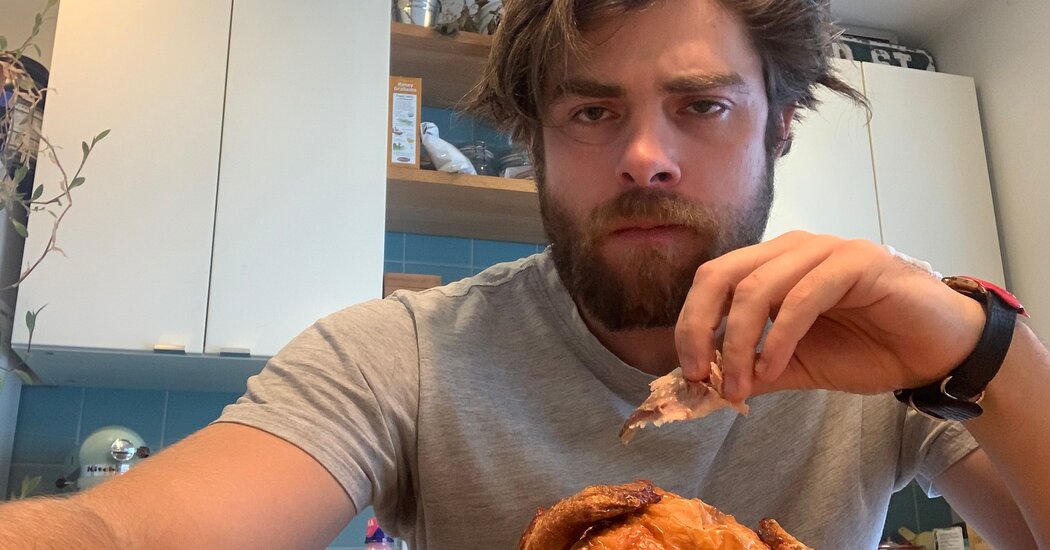 Alexander Tominsky was on an epic quest to give Philadelphia something to celebrate, but he said he felt relieved to be done with the challenge. “My body is ready to repair,” he said.

There was no confetti strewn across the streets of Philadelphia on Sunday morning, no chants of “We are the champions,” or whiffs of smoke from celebratory fireworks. The city had lost both the World Series and the Major League Soccer Cup final on Saturday in a span of about five hours.

But at 12 p.m. on Sunday, at an abandoned pier along the Delaware River, a bearded man in a white sleeveless shirt sat at a makeshift table and stared intently at the plate as dozens gathered around. They braced for gusts of wind in order to cheer him in the final stretch of a self-imposed challenge: To devour 40 rotisserie chickens in 40 days.

Maybe the man, Alexander Tominsky, 31, would be the one to bring them redemption after a miserable weekend filled with defeat.

“Eat that bird!” they chanted. And eat it he did.

In an hour, Mr. Tominsky, a restaurant server in the city, ate his 40th rotisserie chicken in as many days, completing an Odyssean journey of sorts that had enthralled, and puzzled, thousands online, and brought a moment of rejoicing to a beaten city, a chance to holler and declare victory for the person now referred to as “The Philadelphia Chicken Man.”

“I’m happy that it’s over,” he said in an interview on Sunday evening. “My body is ready to repair.”

For years now, some have earned a flicker of internet fame for eccentric challenges often involving food. Recently, there was the man who was made to spend 24 hours at a Waffle House restaurant after finishing last place in a fantasy league. (For every waffle he ate, his sentence was reduced by an hour.) There was the other guy who ate one free Krispy Kreme doughnut a day for most of 2021.

Those challenges, however, are often born from lost bets, charitable endeavors or attempts at garnering viewership for brands and channels.

Mr. Tominsky, who was born in Rhode Island and moved to Philadelphia in 2014, has no personal brand or channel. He lost no bet and did not set out to make money, he said.

Instead, his chicken quest began with a sincere and almost existential sense of purpose: Much of the world is in pain, Mr. Tominsky said, so he must do something that brings him pain to make others smile.

“Sounds weird,” he said. “But I just felt like I was doing this for a very important reason.”

He originally planned to eat rotisserie chicken for 30 days because it felt right, he said. The challenge was extended 10 more days after he felt he had not gone far enough.

At first, there was no pain. He would eat the chickens in 20 minutes. But after a couple weeks, he began feeling cramped up, bloated from all the sodium, and said that he came to believe that he could “feel the pulse of my heart in my stomach.” He would take about two hours to chow down each of the chickens, which, he emphasized, were always completely eaten and usually his only meal of the day. (He lost about 16 pounds over the 40 days.)

Mr. Tominsky recalled thinking at the time: “This is just a little bit of an inconvenience and a sacrifice for the joy that it seems to be bringing people.”

In his first public post about the ordeal on Oct. 8, which came at Day 11 of the challenge, the trace of a faint smile can be detected on his face. In most of the rest of the photos, there is no smile, just furrowed brows, his hand on his head and a look that appears to communicate: Help me.

“The pain is part of it,” he said. “The abuse, the torture — all of that is just part of the experience.”

What does one learn when eating dozens of chickens? Well, he said, that they are like a “sensory bomb.”

The dark meat is too salty and greasy, he said. The white meat is dry. When he pokes and grabs the meat, his fingers become oily, and each time he digs back in for more, the slimy sounds make him recoil. While struggling to make it through the last 11 days of the challenge, Mr. Tominsky said he’d chew the chicken into small pieces, mush it in his mouth and slurp it down with water. “Basically, I drank the chicken,” he said.

Still, Mr. Tominsky said, doing it felt worthwhile because the downsides from eating 40 chickens felt “microscopic in comparison to what the world lives with and sees everyday.”

“This is going to sound strange, but if I happened to, for some silly reason, pass away from this,” he said, “I would have been OK with the sacrifice.”

His city has repaid that commitment with an outpouring of praise. Some asked if he could run for mayor or president. One person said a photo of Mr. Tominsky showing his stomach, taken mid-challenge on Sunday, belonged in a museum.

On Sunday, as Mr. Tominsky prepared to finish his last salty bite, he stood up from his table, faced the crowd and played Bruce Springsteen’s “Streets of Philadelphia.”

“Ain’t no angel gonna greet me,” Mr. Springsteen crooned. Then Mr. Tominsky raised his hand in the air and screamed his version of the next line: “It’s just you and me my friends!”

Mr. Tominsky said Philadelphia is “a very interesting city” where a person can experience “a lot of struggle,” but he said it is also a place where he has found “an incredible amount of perseverance.”

He may be done testing his own endurance, though. He said he already knows what his next meal will be: Sushi.

Seventh round of talks between farmer leaders and government underway at Vigyan Bhawan in...