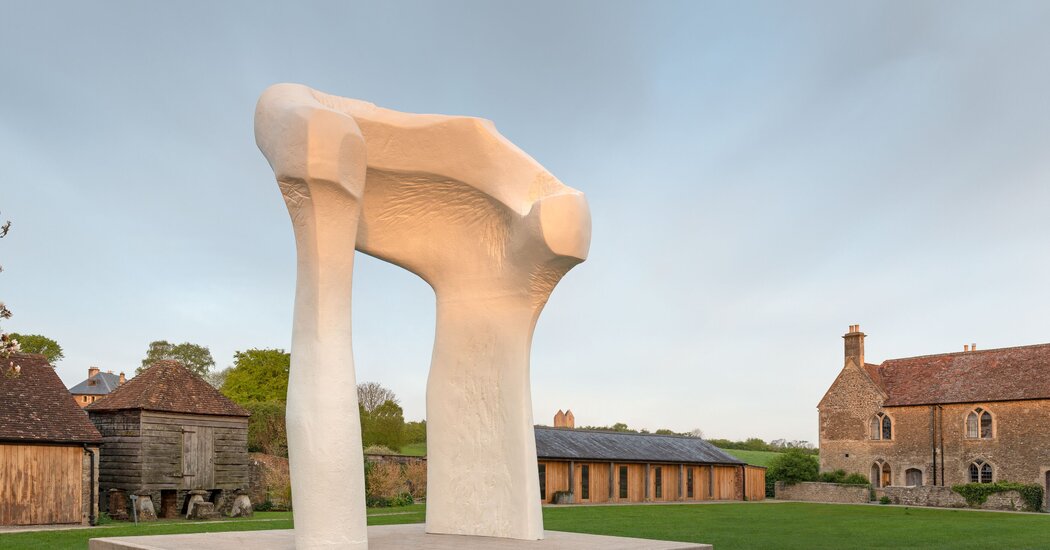 DRIVE THREE HOURS southwest of London and you’ll find yourself among Somerset’s rolling hills, their smooth expanses interrupted by hedgerows and grazing sheep. Possibly the erstwhile home of King Arthur’s court, the English county is a centuries-old agricultural center renowned for its Cheddar and cider apples. It’s also long been a destination for those seeking a respite — or a party. By A.D. 76, the Romans were flocking to the spa complex they’d built around the natural hot springs in Bath. Georgian-era English aristocrats followed suit, staying in the curved row of 18th-century stone-faced townhouses known as the Royal Crescent for the social season in Bath. More recently, Somerset’s Glastonbury Festival has drawn crowds — Billie Eilish, Kendrick Lamar and Paul McCartney were this year’s headliners — but mostly the area has endured as a sleepy hideaway. John Steinbeck called the six months he spent writing “The Acts of King Arthur and His Noble Knights” (1976) in the medieval Somerset market town of Bruton among the happiest of his life.

It’s a sentiment that seems to be shared by the area’s latest wave of visitors, which includes artists, directors and fashion people from London who come on weekends or major holidays, alongside an influx of new full-time residents, who, able to work more flexibly since the onset of the pandemic, have swapped the city for the country. “I can never get enough of the green — it’s color therapy,” says the jewelry designer Solange Azagury-Partridge, 60, who owns an 1860s-era stone cottage and a garden filled with wildflowers, including daisies, poppies and buttercups, just outside Bruton. “It’s as though the landscape has been bathed in fairy dust.”

This lichen-mottled manor house, now a hotel, was for 200 years the seat of the Hobhouse family. Their oil portraits still hang on the sage-green and steel-blue walls of the library, drawing room and bar, which the current owners — Koos Bekker and Karen Roos of the Babylonstoren hotel outside Cape Town, South Africa — have updated with contemporary sofas by Moroso and Ames. The 40 bedrooms each honor multiple eras: No. 2, for example, has a mahogany four-poster bed, a free-standing Agape tub by Patricia Urquiola and views of the croquet lawn, while rooms in the year-old Farmyard complex, a short golf-cart drive from the manor, are more rustic (though it has its own swimming pool and bar). Meals are made using produce and meat from the 1,000-acre estate, and breakfast might include eggs Benedict with paper-thin slices of ham, while dinner could be chargrilled venison with Jerusalem artichoke and poached quince. Guests have after-hours access to the public grounds, where they’ll find 267 varieties of apples and a glass-walled cafe serving cider, as well as sites like Villa Ventorum, unveiled just this past June, a reconstruction of a 1,600-year-old Roman villa whose remains were found on the estate. thenewtinsomerset.com.

This hotel, which like the Newt opened in 2019, comprises a five-bedroom townhouse on Bruton’s main street, as well as outbuildings that date from the 15th century and now house seven additional bedrooms. Cozy interiors by the London-based design firm Frank & Faber feature eccentric candlesticks and mosaic mirrors made with china fragments by local artist Candace Bahouth, floral wallpapers by Morris & Co. and striped curtains by Pierre Frey. The hotel’s sitting room is decorated with 1960s fashion photography by the likes of Terence Donovan that Claudia Waddams, who owns the hotel with her husband, Aled Rees, got from her fashion-editor mother, Brigid Keenan, and the iron railing of the grand 18th-century staircase was made in the former blacksmith’s forge out back. numberonebruton.com.

Merlin Labron-Johnson was 24 and running the kitchen at Portland restaurant in London when it won its Michelin star in 2015. He returned to his West Country roots three years ago to open Osip, which is on the ground floor of Number One Bruton but worth a reservation even if you’re not staying overnight. The dining room has white wall tiles, green leather banquettes and dried flowers hanging from hooks, and the menu emphasizes all things local, including wild garlic and elderflower, which is foraged nearby. The offerings change frequently. You might begin with a Kingston Black aperitif made with Burrow Hill Cider and garden–herb broth with wild-garlic oil, before choosing between intriguing combinations such as gnudi with nettle sauce and smoked whey or oca root with raw trout, bone jelly and smoked cream. For a less formal meal, try the dishes — including trout carpaccio and courgette with preserved lemon and nasturtium — at the Old Pharmacy, Osip’s sister wine bar, bistro and grocery store, located next door. osiprestaurant.com.

The Platonic ideal of an English country pub, this Georgian-style inn in Corton Denham got a makeover last year and is within striking distance of Cadbury Castle — the Bronze and Iron Age hilltop fortress that, as far as some Somerset locals are concerned, was the site of King Arthur’s Camelot. (The Cornish and Welsh dispute this.) Either way, the grassy ramparts around the fort, which offer views across the Somerset Levels to Glastonbury Tor, make for a lovely hike. Afterward, have a West Country ale or a cider on tap — perhaps Corton Denham’s own oak-barrel Lawrence’s Cider or Wild Beer — on the sunny terrace. The inn’s 10 rentable bedrooms have patterned curtains and headboards by British textile designers including Jane Churchill and Christopher Farr, as well as toiletries by the British botanical brand 100 Acres. For a summery meal of seasonal dishes, look for local market fish and Somerset strawberries with elderflower ice and meringue. thequeensarms.com.

The Somerset outpost of the global gallery outfit raised eyebrows when it arrived trailed by collectors and tourists in 2014. But locals have warmed to this art venue situated in a series of restored farm buildings, whose exhibitions have featured the work of Bharti Kher, Louise Bourgeois, Martin Creed and others. Right now, through early September, there’s a show of abstract sculptures made over six decades by the early-20th-century English artist Henry Moore. In addition to the main galleries, you can visit two bookshops selling art tomes, sheepskins and seed packets — the latter inspired by the Piet Oudolf-designed gardens, an enchanting sweep of colors and textures whatever the season. A 10-minute walk from the converted farmstead is Make, Hauser & Wirth’s new Bruton showroom devoted to art by local craftspeople. hauserwirth.com.

An Elizabethan Renaissance riot of Dutch gables, mullioned windows and obelisks sitting on 260 acres of parkland, Montacute House was built of golden Hamstone by the lawyer turned politician Sir Edward Phelips, who was involved with the prosecution of Guy Fawkes and his fellow gunpowder plotters. It’s now managed by the National Trust, which allows visitors to tour the paneled library, with its heraldic stained-glass windows and geometric strap work ceiling, as well as England’s longest gallery, a more-than-170-foot-long space where Elizabethans would exercise and play games and whose side rooms are hung with portraits from the courts of Henry VIII, Elizabeth I and James I. nationaltrust.org.uk/montacute-house.

“Rag of Colts create beautiful handbags and accessories from repurposed saddle leather that improve with age and will last a lifetime,” says Rosanna Wilson Stephens, co-owner of the year-old Wilson Stephens & Jones Gallery on Bruton High Street. “You can choose a ready-made item or have something commissioned. Each piece is hand-stitched, and I love the materials’ depth of color and patina.” The designer’s new Bruton store is open most weekdays, morning to midafternoon, as well as by appointment. From about $470, ragofcolts.com.

“We love local artist Richard Pomeroy’s range of handmade porcelain so much that we’ve found many uses for it in our restaurant and clubroom and on our terrace,” says Catherine Butler, owner of Bruton restaurant and guesthouse At the Chapel. “Our favorites are the coffee and tea mugs in tangerine, the tea-light beakers in cobalt blue and cowslip yellow and the cachepots in moss green. Amazingly, despite being porcelain, they’re dishwasher safe.” From about $50, richardpomeroyporcelain.com.

Inside an Animal Sanctuary in Bolivia Where Tourists Can Help

A Paradise of Birds in Ghana’s Kakum National Park

It is up to Sourav Ganguly whether he will attend PM Modi’s rally: BJP