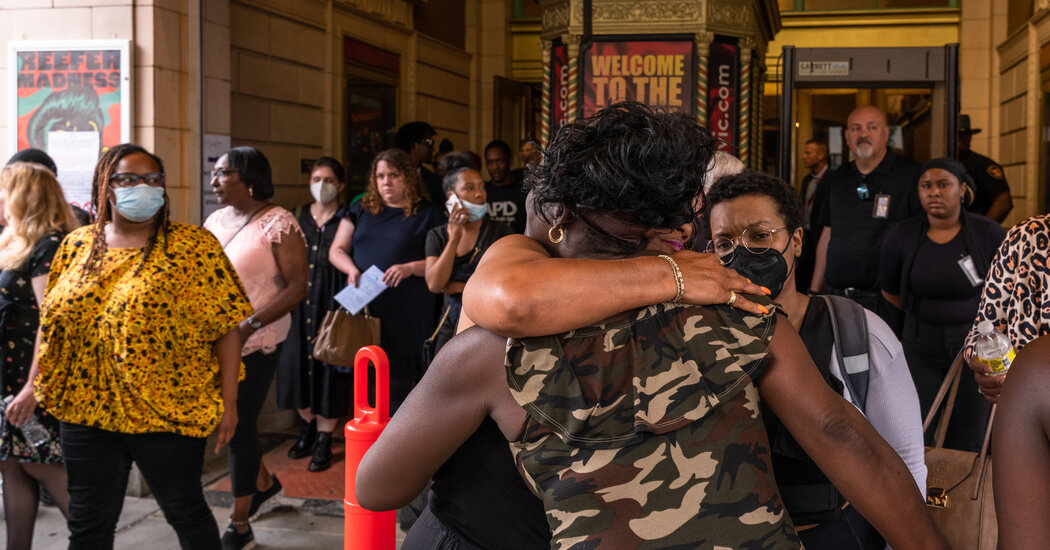 Protesters have gathered regularly in downtown Akron since the death of Jayland Walker. The city has imposed a nightly curfew.

AKRON, Ohio — Hundreds of mourners filled a downtown Akron theater on Wednesday to pay their last respects to Jayland Walker, a young Black man killed by police officers, in a city that has been on edge since his death.

Friends and family members recalled Mr. Walker as kindhearted and genuine, with a love of music and basketball and dreams of starting his own business. But the message from the pulpit was also about the troubling circumstances of his death.

“Social bonds are weak and unraveling,” the Rev. Marlon Walker said. In a polarized society, he said, “the Black voices are unheard.”

Mr. Walker lamented that victims of crime often become vilified and that “all this is compounded by complacency by our leadership.”

Jayland Walker, 25, was killed in the early hours of June 27 after the police chased him, first in vehicles and then on foot, following an attempted traffic stop. Officers believed that he had shot at them from his car and feared that he was preparing to fire again, the police have said. But Mr. Walker was unarmed at the time he was killed. He sustained more than 60 gunshot wounds.

Eight officers who were involved in the shooting were placed on administrative leave, the police said.

In the weeks since the shooting, Akron, a city of about 200,000 people in northeastern Ohio, has been roiled by protests.

City leaders have imposed a nightly curfew in an attempt to keep the peace, canceled a July 4 celebration and declared Wednesday a day of mourning. The mayor and police chief said this week that rumors about the identities of the officers involved have led to threats by “outside agitators”; the police have not made the officers’ names public.

Mr. Walker’s family and supporters have called on protesters to demonstrate peacefully, even as they have decried violence by the police.

“We are hurting as a city and hurting as a family,” the Rev. Robert E. DeJournett, the pastor of St. Ashworth Temple, Church of God in Christ, said at a news briefing on Monday.

“Not having protest violence is a two-way street,” Mr. DeJournett said. “The protesters need to be nonviolent, but that goes for law enforcement as well.”

On Wednesday afternoon, Mr. Walker lay in an open coffin on the stage of the Akron Civic Theater, as mourners walked by.

“When I think about Jayland, I think about someone who had the biggest heart,” said Robin Elerick, Mr. Walker’s cousin and one of the speakers. “He was so sweet and so authentically genuine, and that’s what I’ll always remember about him.”

Sitting outside, Darlene Pearson, 78, a cousin of Mr. Walker’s mother, said his violent death had left her frightened of the police for the first time in her life.

Ms. Pearson choked back tears as she described watching the police video of the shooting. Mr. Walker, she said, “was in no way a threat to public safety that they had to kill him in that way.”

Lynette Williams, a local preschool teacher, said her young students, too, have been saying they are scared of the police.

“The mayor and the chief of police need to sit down and talk to us face to face,” Ms. Williams said. “They need to see our eyes as we talk, to see the emotion and the hurt of this case. You can’t do that by talking to the public on a Zoom call from your office.”

The Ohio Bureau of Criminal Investigation is investigating the shooting, and its findings will be turned over to county prosecutors to present evidence to a grand jury to determine if any officers will be charged criminally. Akron police are also conducting an internal investigation to determine if officers followed procedures, including the department’s pursuit policy.