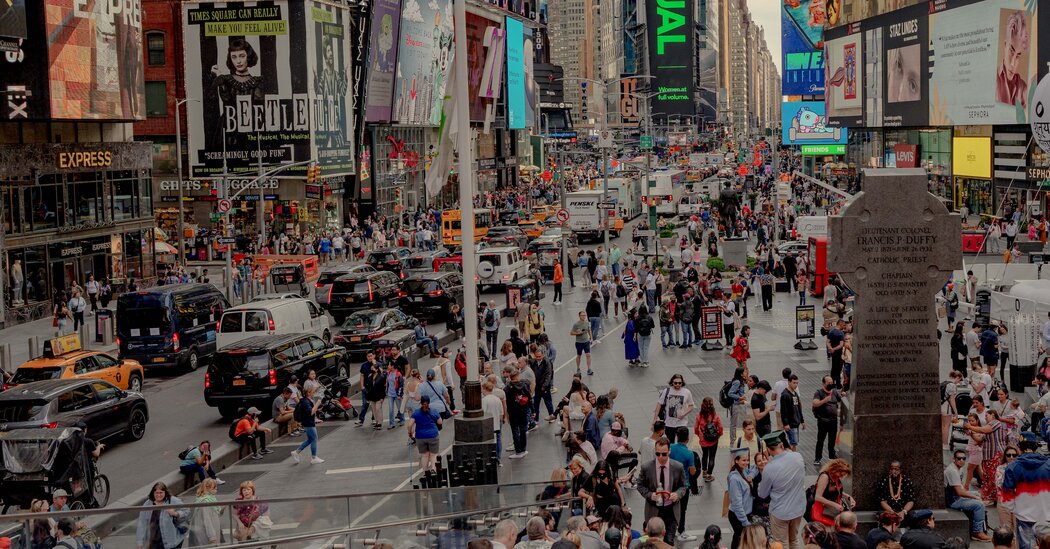 Despite the grim headlines, 2022 is less violent so far than last year.

Crime, murder and mass shootings have dominated headlines this year. Just over the weekend, a shooting in Cincinnati wounded nine people, and another in Detroit killed one and wounded four.

But the full crime data tells a different story. Nationwide, shootings are down 4 percent this year compared to the same time last year. In big cities, murders are down 3 percent. If the decrease in murders continues for the rest of 2022, it will be the first year since 2018 in which they fell in the U.S.

The declines are small. But they are welcome news after two years of large increases left the murder rate nearly 40 percent higher than it had been.

“I would say I have a heavily guarded optimism,” said Richard Rosenfeld, a criminologist at the University of Missouri-St. Louis.

One reason for hope: The likely causes of the spike in murders in 2020 and 2021 are receding.

Disruptions related to Covid probably led to more murders and shootings by shutting down social services, which had kept people safe, and closing schools, which left many teens idle. (My colleagues Thomas Fuller and Tim Arango wrote about the connection between the pandemic and gun violence.) But the U.S. has opened back up, which will likely help reverse the effects of the last two years on violent crime.

The aftermath of George Floyd’s murder in 2020 also likely caused more violence, straining police-community relations and diminishing the effectiveness of law enforcement. That effect, too, has eased as public attention has shifted away from high-profile episodes of police brutality. A similar trend played out before: After protests over policing erupted between 2014 and 2016, murders increased for two years and then fell.

2020 was a chaotic year overall, with Covid, protests about police and a presidential election. This turmoil fostered social discord and anomie, which also could contribute to murders: As people lose trust in each other and their institutions, they are more likely to lash out in crime and violence. As the chaos recedes, the violence may be receding as well.

This kind of good news rarely goes reported — an example of what my colleague David Leonhardt has called the media’s bad news bias. In 2022, bad news bias has left many Americans thinking that violent crime is worse this year when it ultimately may not be. And this bias has skewed public perceptions of crime and violence in the past, too.

When the media reports on crime, it almost always focuses on grim stories. A recent analysis by Bloomberg found that headlines about shootings in New York City recently increased while the actual number of shootings remained relatively flat. The old cliché here is that if it bleeds, it leads.

The constant stream of bad news is one reason, experts say, that Americans consistently say crime is getting worse when it is not. Between the 1990s and 2014, crime — including violent crime and murders — fell more than 50 percent across the U.S. Yet for most of that time, a majority of Americans told Gallup that crime was up compared to the year before.

The bad news bias potentially leaves Americans more scared for their safety than they should be. It also may drive more people to believe that punitive criminal justice policies are needed, or that reforms are increasing crime when they are not. In a speech last month, for example, Donald Trump recounted several recent murders in grisly detail and called for “tough,” “nasty” and “mean” anti-crime policies.

Experts caution against making too much of the year’s trends. The decreases so far are relatively small, and they could end up a blip. Robberies and some property crimes are up in big U.S. cities. And America still has far more gun violence than its peers, largely because of widespread gun ownership.

The murder rate “is still significantly higher than it was two or three years ago,” said Jeff Asher, co-founder of AH Datalytics, which tracks U.S. crime data.

But the trend, right now, is heading in a good direction. For an accurate view of crime in the U.S., Americans need to hear that.

For more: On the A train, New York’s longest subway line, riders say they feel less safe — even though crime has not risen since 2019.

The last month has been stellar for the Biden administration, Charles Blow writes.

Abortion by pill: Some women “self-manage” ending their pregnancies.

In the air: The challenges of flying with a wheelchair.

Advice from Wirecutter: Upgrade your kitchen.

Metropolitan Diary: “Surprised, I turned to see an older man there on the sidewalk.”

Lives Lived: On TV, Clu Gulager played Billy the Kid on the “The Tall Man.” He also appeared in critically acclaimed films like “The Last Picture Show.” Gulager died at 93.

A rainy trade honeymoon: Fresh off acquiring generational superstar Juan Soto last week, the Padres were humbled last night in a sweep at the hands of the rival Los Angeles Dodgers. San Diego was outscored 20-4 in the series, and now trails L.A. in the NL West by 15 and a half games. Ouch. Elsewhere, the New York Mets and flame-throwing Jacob deGrom suddenly look scary.

A remarkable return: Minnesota Lynx forward Napheesa Collier made her season debut last night — about 10 weeks after giving birth. She rejoins a team at risk of missing the playoffs for the first time since 2010.

A scary debut: Manchester City was already a runaway favorite to dominate the English Premier League in 2022-23. The two-goal debut of superstar arrival Erling Haaland yesterday underscored every prediction.

Learn to love to a jazz icon

Duke Ellington arrived in New York just as the Harlem Renaissance was getting underway. His orchestra became the soundtrack of the era, and he was its icon, a global ambassador for American culture.

The Times asked a dozen musicians, writers and critics to recommend one track to help readers fall in love with Ellington. Their selections include swinging big-band tunes, tales of working-class Black life and a song the bandleader Miho Hazama calls “the happiest music in the world!”

Combine tomatoes and basil in this fried rice.

Wear the crop top. Get the salad — and the fries, too. Have a shameless summer.

In the Japanese author Emi Yagi’s prizewinning debut, “Diary of a Void,” a woman decides to feign pregnancy.

The pangram from yesterday’s Spelling Bee was biotech. Here is today’s puzzle.

And here’s today’s Wordle. After, use our bot to become better.

“The Daily” is about Alex Jones.

Sweden’s Divisive Election Is Too Close to Call, Officials Say