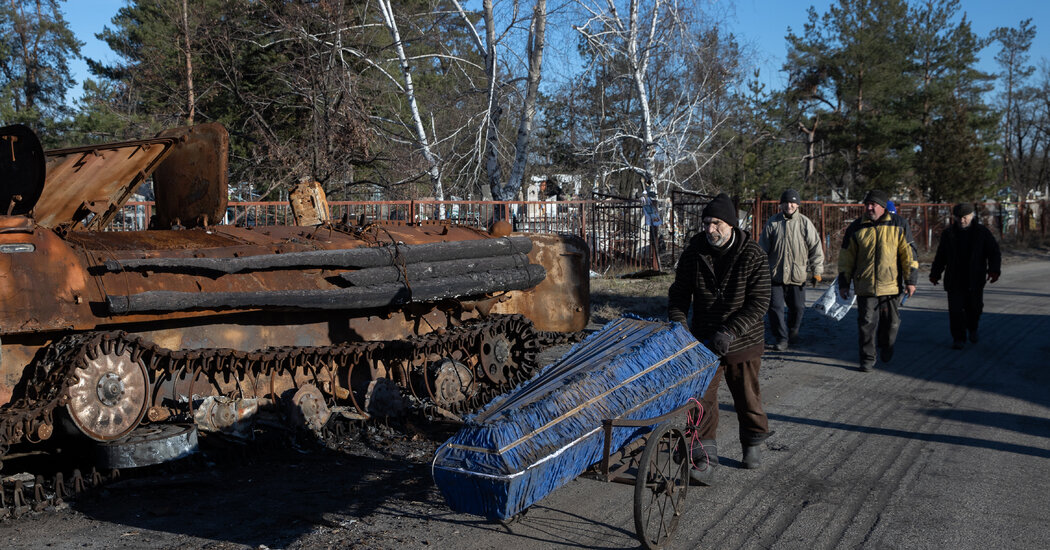 “Friends are not friends anymore,’’ said one woman in the town of Sviatohirsk, which remains divided not by trench lines and artillery, but by where people’s allegiances lie: with Moscow or Kyiv.

SVIATOHIRSK, Ukraine — When Myroslava, a 36-year-old construction manager, returned to her hometown of Sviatohirsk in eastern Ukraine last month, she expected to find her house destroyed by shelling.

Her house was indeed heavily damaged, but she discovered something else even more disturbing: Her neighbors, who had stayed behind during the Russian occupation, had stolen furniture, insulation and roof tiles from her home and a property she oversaw in town.

These were people she had grown up with, she lamented. Worse, the looted tiles were visible on the neighbor’s roof.

“Friends are not friends anymore,’’ she said on a cold November day, her brown hair tucked in a beanie and her small frame wrapped in a winter coat. “The neighbors are not neighbors. Relatives — a part of them aren’t relatives anymore, because no one expected us to come back.”

Similar anxieties have been playing out among residents of the town, still mostly empty of people, ever since Ukrainian forces liberated it in September. The Russians’ arrival over the summer imposed a litmus test of sorts for Sviatohirsk and other tight-knit communities in Ukraine’s east, where the Russian church and Russian television had for years been promoting loyalty to Moscow.

As civilians who fled Sviatohirsk rejoin neighbors who stayed, residents say they now eye one another with suspicion. And as a cold winter sets in, the town remains divided — not by trench lines and artillery, but by where people’s allegiances lie: with Moscow or Kyiv.

Suspicions run so high that residents do not even agree which side, Russia or Ukraine, is responsible for shelling that struck various neighborhoods in the city, damaging houses and killing several dozen people.

“No one is even letting it out — who he stands for and all that,’’ said one resident, an older man who declined to provide his name. He was sitting beside a warm steel stove at a makeshift coffee shop called Bouchée that serves as de facto neutral territory: a place where both pro-Ukrainians and pro-Russians can get a bite to eat undisturbed, as long as they keep to themselves

The town’s freshly installed local government recognizes the problem and hopes that residents with pro-Russian sentiments will eventually embrace Kyiv, especially as conditions improve after living without power and basic services during the occupation.

“The cellphone connection is working, the bread factory is working, the Ukrainian post office is working,” said Volodymyr Rybalkin, the head of the local military administration, who acts as a sort of interim mayor. “I think that even the people who knowingly stayed under occupation, waiting for the so-called ‘Russian peace’ will sooner or later understand how much they were mistaken.”

But that conversion will not be easy.

Even before the war, the presence of the Monastery of the Caves — loyal to the Russian Orthodox Church and considered one of the church’s five holiest sites — gave the town a reputation for being pro-Russian. That perception was compounded by Sviatohirsk’s location in the Donbas, a predominately Russian-speaking region where Moscow for decades promoted Soviet nostalgia politics.

The propaganda, especially on television, has helped the Kremlin influence some Russian-speaking civilians in the east, even as it falsely depicts the region as essentially part of Russia and cites the supposed oppression of Russian speakers there as a justification for invading.

How Sviatohirsk will move on from its troubled interlude of occupation remains unclear. Around 650 people remain from a prewar population of about 4,000, according to local officials. Approximately 120 residents have returned since the Russian retreat.

Returnees like Myroslava believe that more people with pro-Ukrainian sensibilities will come back when the weather warms in the spring, diluting the local sentiment toward Russia.

“They are already slowly starting to come back, because a lot of them can’t pay rent in other cities, and they return even if their house is destroyed,” said Myroslava, who returned to her home in October. She declined to provide her last name for security reasons.

The monastery, where nuns and monks remained loyal to the Russian church, wields significant influence in the town, adding an extra layer of complexity.

“Yeah, people are coming back to Sviatohirsk, but no quality people will be left here; the holy fathers say so,” said an older man, deploring the return of the pro-Ukrainians and suggesting they did not share the pro-Russian views of the church.

The man, standing in the town’s cemetery, declined to give his name. He was helping to rebury a child killed in the shelling, whose body had recently been exhumed so that the local police could examine it.

In recent weeks, Kyiv’s intelligence services have launched at least one operation and a series of arrests aimed at rooting out spies in the church, drawing condemnation from Moscow. And President Volodymyr Zelensky recently proposed outlawing the branch of the Ukrainian Orthodox Church that is loyal to Moscow, saying the measure was needed to ensure Russia is not able to “weaken Ukraine from within.”

“Western Ukraine is thinking in its own way, and Donbas is thinking in a different way,” said one of the monastery’s monks, who also declined to provide his name. He compared those from the west to “occupiers.”

The older man sitting at the Bouchée cafe had done the same, comparing Ukraine’s liberation of the town to another “occupation.”

Local officials are still trying to determine if some residents actively collaborated with the Russians. Ruslan Tsymbal, a senior district police officer in Sviatohirsk, declined to discuss the issue of Russian collaborators but confirmed there were ongoing investigations. In the case of Myroslava’s looted belongings, the police and the military were able to get back some of her stolen furniture.

Another problem exacerbating tensions is the feeling among some residents that other members of the community might have turned on them. Ihor Ponomarenko, who owned an adventure park and served in the town’s territorial defense, said his name and personal information were posted on pro-Russian chats on Telegram, a messaging service, toward the end of March.

The same thing happened to others connected to the territorial defense, he said, as well as local volunteers and the town’s military administration.

“They created websites, claiming that we are fascists and so on,” Mr. Ponomarenko, 51, said.

He returned to Sviatohirsk in October. His park and cafe — where he would host children’s birthday parties — were destroyed. Decorations he had put up for Valentine’s Day lay scattered in ruins.

Other local business owners who were pro-Ukrainian also lost their livelihoods when the Russians came, he said. Some businesses, like his, were destroyed by shelling, others were looted by their pro-Russian neighbors, he said, though he did not cite any evidence.

Residents who rode out much of the occupation from their basement shelters are still surveying parts of their destroyed town, and there are sharply different views among some on which army is to blame for the carnage.

More than 40 people died during the occupation, according to local officials, many from shelling.

“Initially, there were a lot of people trying to prove that ‘this is Ukraine who ruined our building’,’’ said Mr. Rybalkin, the military administrator. “Even though they didn’t understand that the enemy was held off here, when the Ukrainians kept the Russians from fording the river.”

But neighbors still argued about how the battle for Sviatohirsk — which lasted from June, when the Russians occupied the town, until they retreated in September — unfolded.

The fighting played out in phases on either side of the Siversky Donets River, which bisects the town. A bridge that connected both sides, where lovers once placed locks on its railings, was destroyed as Kyiv’s forces retreated in the summer.

Russian forces on the north side of the river fired into the hills on the south, occasionally striking the monastery grounds. Ukrainian forces entrenched on the high bank fired back across the river to the town.

The monk at the monastery accused the Ukrainians of shelling the holy site, killing several people, though it was clear, at least on the damage visible from the exterior, that the shells had come from the Russian side of the river.

Myroslava shrugged off claims by residents who blame the Ukrainians for the town’s destruction. “They like to say that ‘Ukraine was firing from the mountain’, but they would not have fired if seven Russian tanks were not stationed next to my yard,” she said.

The rusted hulks of some of those tanks are still in her neighborhood, carved open by Ukrainian shells much like the homes around them, their roof panels clattering in the cold wind.

She repeated: “They would not have fired.”

A Day of Mourning in Ohio, Where a Young Black Man Was Killed by...

Tech’s Talent Wars Have Come Back to Bite It

Delhi is not too far from Dispur now: PM Modi in Assam