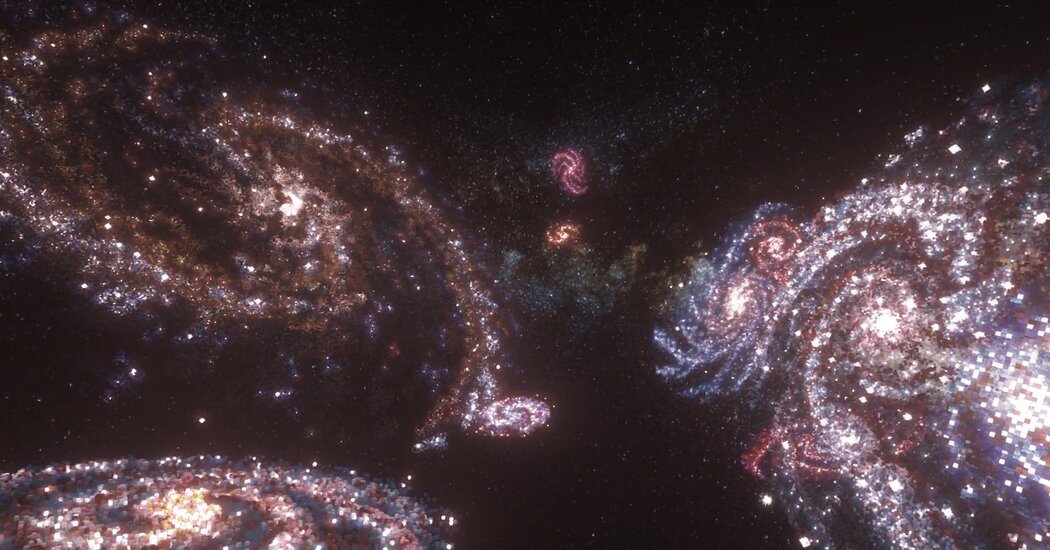 Christopher Slayton, 18, spent two months intricately designing the planets. He even went skydiving to get a better appreciation for Earth.

Mr. Slayton, 18, didn’t have to leave his desk to do so. He set out to build the entire observable universe, block by block, in Minecraft, a video game where users build and explore worlds.

By the end, he felt as if he had traveled to every corner of the universe.

“Everyone freaks out about the power and expansiveness of the universe, which I never really got that much,” he said. But after working for a month and 15 days to build it and additional two weeks to create a YouTube video unveiling it, “I realized even more how beautiful it is.”

Mr. Slayton, known as ChrisDaCow on his Minecraft-focused YouTube, Reddit, Twitter, Instagram and TikTok accounts, has been playing the game for almost a decade, and he’s not a user of any other games, he said. He started posting videos of his “builds,” which are landscapes he creates inside the game, on YouTube in 2019. This channel has become his main priority since he graduated high school this spring.

College may be on his radar, but it’s not time yet, Mr. Slayton said. He’ll be starting a job as a lifeguard soon, while continuing to grow his YouTube content to reach more followers.

With almost 25,000 subscribers on YouTube, Mr. Slayton said the response to this video motivated him to keep pursuing ambitious ideas.

His intention is to make the videos more interesting than just narrations paired with videos of a gamer using the interface, he said. Mr. Slayton, who lives in San Diego with his mother, stepfather and brother, said he aims to tell stories through Minecraft.

For the video on the universe-building quest, he started off by skydiving to see the planet from a different perspective before working to create his version of the universe. “The only way to truly appreciate the beauty of our planet is by jumping out of an airplane,” he said in the video.

He consulted photos for every detail in the Minecraft universe and relearned math concepts to build his creation to scale, making sure angles and proportions were as accurate as possible. In his first attempt to make Africa, the result was much too small, for example.

Mr. Slayton keeps a notebook and sketchbook on hand to organize his videos, jot down ideas and take notes about the topic he is studying. In the videos, he demonstrates his artistic skills on a whiteboard, such as when talking about the rings of planets while explaining the concept he created in Minecraft.

“It’s really satisfying to be able to fly through some galaxies or look at a black hole, not through just the movie Interstellar or something like that,” he said.

To his knowledge, Mr. Slayton is not the first to attempt making the universe in Minecraft, but he said he made an effort to be accurate and meticulous. The Twitter page for Xbox in the United Kingdom praised Mr. Slayton’s work, and users across various social media platforms posted comments to express that they were in awe.

“I want to tell a real entertaining story, unlike how anyone else has done it in the Minecraft community or just the gaming community,” Mr. Slayton said. “I kind of want to up the standards a bit.”

Mr. Slayton’s last build was a rendition of Vincent van Gogh’s “Starry Night.” He said he hoped to explore themes such as the fourth dimension, the multiverse and the metaverse in future builds and videos.

Minecraft, which was initially released in 2009, with a fuller version following in 2011, is more than a hobby for many; for B. Reeja Jayan, an associate professor of mechanical engineering, it’s the way she teaches a materials science class at Carnegie Mellon University.

Since 2017, Professor Jayan’s students have used Minecraft to connect their engineering learning to concepts they are interested in. One student created a water world, where water had a different property than it does in real life, and he could control what floated and sunk.

“This is giving each person the ability to learn, visualize,” she said. “And I feel they inclusively learn. For a lot of people or for a broad spectrum of learners, it’s challenging to learn about the universe, to learn about new advancements.”

She said it’s easier to understand three-dimensional concepts in Minecraft than by reading textbook chapters.

“In my opinion, learning must be fun,” she said. “And one of the advantages of using a game like Minecraft is it’s so flexible. It’s so easy for a small child to learn to play the game, but at the same time it’s been adapted for teaching advanced scientific concepts.”

Exploring and learning concepts via Minecraft can be seen as a generational shift, said Ken Thompson, an assistant professor of digital game design at the University of Connecticut.

About two-thirds of Americans play video games, according to a 2022 industry report. Professor Thompson said young people, such as Mr. Slayton, could apply problem solving and critical thinking when tackling projects such as the universe creation.

“There are very serious applications,” he said, adding, “then there’s also this wonderful science side of it where we’re experimenting with systems that are otherwise really hard to conceptualize.”

In 2022, some students at his university held a commencement ceremony in Minecraft, organized by the gaming club, after the in-person event was canceled because of the coronavirus pandemic. They created the campus and avatars representing students and even faculty to stage the virtual gathering.

For Mr. Slayton, there was some relief after finishing the Minecraft universe: He said he hadn’t been sleeping enough over those two months, felt spread thin while finishing the video and ended up with a cold during one stressful period.

He hopes to move production from his bedroom to a studio sometime soon to continue creating his builds.

Despite the response, Mr. Slayton said he won’t be content until he has gained a more permanent following on YouTube. “I’m kind of uneasy until I can do that consistently.”

Petrol, diesel prices cut by Rs 5 in THIS state