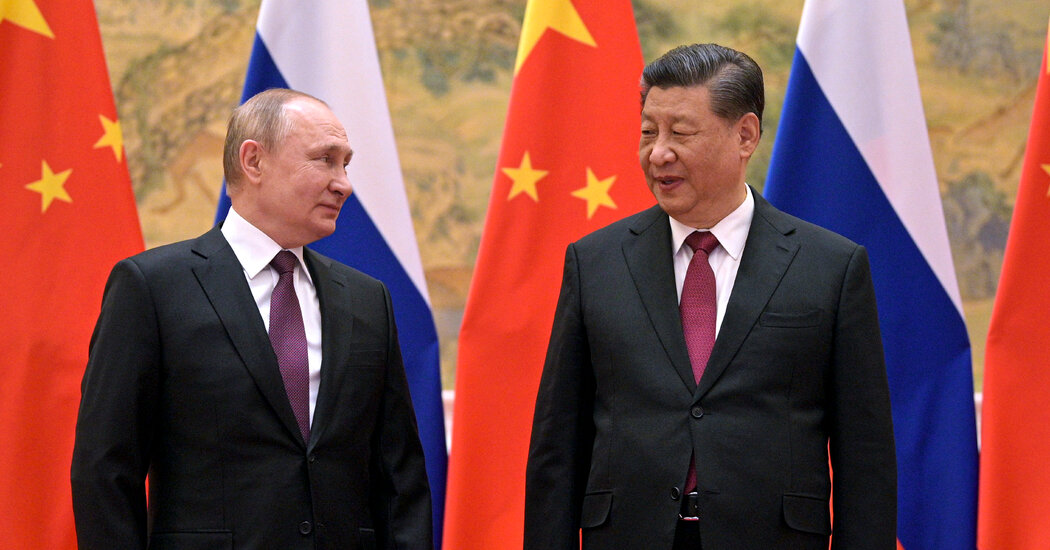 With tensions rising in Taiwan, we look at the shared interests of China, Russia and Iran.

Vladimir Putin has traveled outside the boundaries of the former Soviet Union only twice this year. Once was to visit China in February, and once was to visit Iran last month, my colleague David Sanger points out.

Those two countries obviously have something in common. Like Russia, both China and Iran view the U.S. as an adversary. If the world is breaking into two competing blocs — democracy versus autocracy, as President Biden has put it — Russia, China, and Iran make up the core of the anti-U.S. bloc. And they recently seem to be increasing their cooperation.

Their closer ties raise an alarming prospect: What if all three countries decide to confront the U.S. simultaneously sometime soon in an effort to overwhelm the American ability to respond?

Russia has already invaded Ukraine and has the ability to expand its attack to new parts of the country. Iran has so far refused to re-enter the nuclear pact that Donald Trump canceled and could at some point take steps to build a nuclear weapon. China has become more aggressive toward Taiwan, and U.S. officials have grown concerned about the possibility of an invasion in coming years.

“I’m not predicting it,” David told me, referring to the prospect of simultaneous acts of aggression from China, Iran and Russia. “But there is reason to think it’s plausible, and our system can barely manage one big conflict at a time.”

The focus this week has turned to Taiwan. Nancy Pelosi, the speaker of the House, may soon stop there, as part of her current tour of Asia, which would make her the highest-ranking U.S. official to visit the island in years. Newt Gingrich visited in 1997 when he was speaker, and Alex Azar, Trump’s secretary of health and human services, went in 2020.

Chinese officials have reacted angrily to Pelosi’s planned visit, which underscores China’s new aggression toward Taiwan. Xi Jinping, China’s president, seemed to be referring to her last week when he told Biden that the U.S. should not “play with fire.” Some U.S. intelligence officials believe that China may send fighter jets to escort Pelosi’s plane as it approaches Taiwan or take steps in coming weeks to damage Taiwan’s economy.

Biden administration officials yesterday tried to warn China from taking aggressive action. “Our actions are not threatening and they break no new ground,” John Kirby, a spokesman, said at the White House yesterday. “Nothing about this potential visit — potential visit — which oh, by the way, has precedent, would change the status quo.”

There are no easy choices for the U.S. in this situation.

If Pelosi had canceled the visit, she would have been overruling the wishes of Taiwan’s leaders. A visit, said my colleague Amy Qin, who is based in Taiwan, “boosts Taiwan’s legitimacy on the international stage.”

As Edward Wong, a Times correspondent who covers diplomacy from Washington, said, “Supporters of the trip argue that it’s the U.S. sending a message to Beijing that Taiwan is important enough to us that we are going to engage at senior levels.” He described the trip as a version of “diplomatic deterrence,” trying to remind China of the potential consequences if it did invade Taiwan.

A cancellation, by contrast, would have risked sending the message that China can dictate American relations with Taiwan. It would have the potential to repeat the mistakes that the U.S. made with Putin over the past 20 years, when it repeatedly tried to appease him.

Putin invaded Georgia, annexed Ukraine’s Crimea peninsula, murdered Russian dissidents and intervened in the U.S. presidential election in 2016. Each time, the U.S. avoided major confrontation, partly out of a worry that it could spark a larger war. Putin, viewing the U.S. and Western Europe as weak, responded last year with a full-scale invasion of Ukraine.

If China believes the U.S. won’t ultimately come to Taiwan’s defense, the chances of an invasion may increase.

But the risks of a confrontational approach are also real. Pelosi’s visit, for example, may lead Chinese airplanes to near Taiwan in new ways. “If they enter into Taiwan’s territorial airspace, an incident could happen, whether Xi wants one or not,” Bonnie Glaser, the director of the Asia Program at the German Marshall Fund of the U.S., told The Times.

Cao Qun, a researcher at a state-run Chinese think tank, recently wrote: “The chances of a clash between China and the United States in the Taiwan Strait are growing.”

None of this means that a coordinated campaign of aggression from China, Russia and Iran will necessarily happen in coming months. For one thing, the three countries have their own tensions, as David Sanger also notes. China and Russia have been longtime rivals for influence in Asia, and both — like the U.S. — would prefer that Iran not become a nuclear power.

But the three countries also have one overarching shared goal: reducing the geopolitical influence of the U.S., Western Europe, Japan and their allies. Already, China, Russia and Iran have collaborated in recent months, especially in the purchase of Russian and Iranian energy.

All three stand to benefit when the U.S. has to cope with multiple international crises at the same time.

Elite universities are out of touch with American society. Walled-off campuses are a big reason, Nick Burns says.

Hospitals are supposed to be transparent about how much procedures cost. Many aren’t, Martin Schoeller argues in a Times Opinion video.

Jeff Bezos’ yacht: Why did Rotterdam stand between a billionaire and his boat?

What debate? In much of America, the return to the office has happened.

Advice from Wirecutter: Anniversary gifts for any relationship.

Lives Lived: Mick Moloney was a recording artist, folklorist, concert presenter and professor who championed Irish culture and encouraged female instrumentalists in a male-dominated field. He died at 77.

The trade machine whirs: M.L.B. teams set a frenzied pace as a trade deadline looms. We even saw the rare trade of a player to the opposite dugout right before first pitch. A Juan Soto deal is probable before today’s 6 p.m. Eastern deadline.

Tiger Woods turned down what? LIV Golf frontman Greg Norman claimed in an interview that he offered Tiger Woods between $700 million and $800 million to join his rogue tour. Woods declined and has since denounced the Saudi-backed upstart league.

Who should play the king?

The eponymous king of Shakespeare’s “Richard III” was found to have a deep curvature of his spine, likely a form of scoliosis. Should the role be reserved for actors with disabilities? Three productions are taking different approaches, Marc Tracy writes in The Times.

It was once common for actors to play characters who were of a different race or gender or with disabilities that they didn’t have. That practice has changed recently, as Hollywood has pushed to give more leading roles to actors from long-overlooked groups. But the shift toward authentic casting also brings a potential downside for women and marginalized groups, who may be kept from playing some of “the greatest, meatiest roles in the repertory,” Marc writes.

The second season of the Native coming-of-age comedy “Reservation Dogs” deepens its emotion.

The pangram from yesterday’s Spelling Bee was nomadic. Here is today’s puzzle.

P.S. Nicholas Kristof is returning to Times Opinion. His column will resume this fall.

“The Daily” is about the killing of al-Zawahri.

Manoj Bajpayee’s ‘Silence… Can You Hear It?’ to premiere on ZEE5 in March