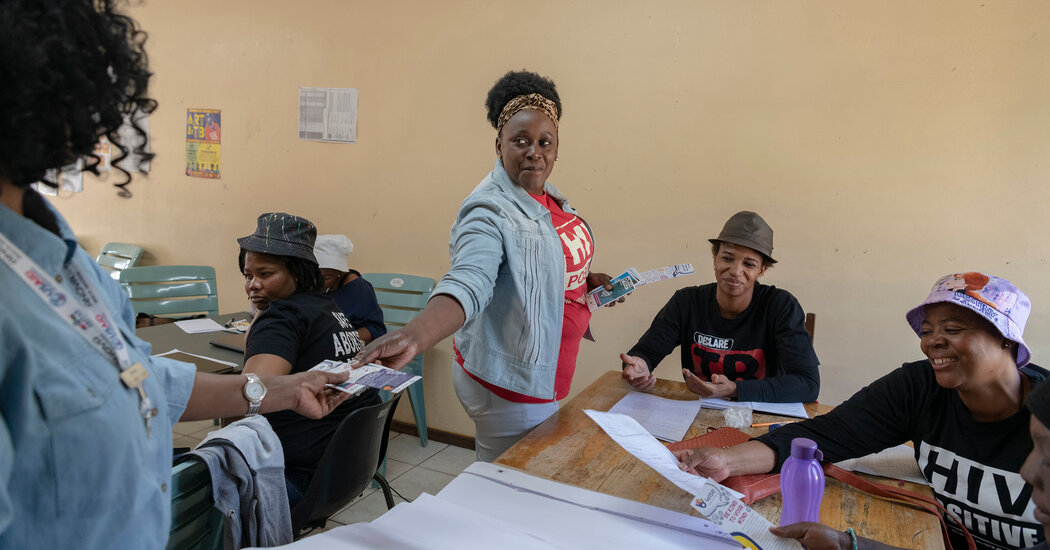 An injection every two months rather than a daily pill could shield many more women from the virus, but it is unavailable in places that need it most.

SOWETO, South Africa — For seven years, a daily pill has been available in South Africa to protect people from getting H.I.V. But when Victoria Makhandule, a community health worker, counsels the young women in her township about the medication, they tell her it doesn’t work for them.

These young women are among the most vulnerable in the world to H.I.V., the virus that causes AIDS, but they say the daily pills, known as PrEP, bring their own challenges. The women may spend an unexpected night away from home and miss a dose, or forget for a day or two. Or their mothers or cousins snoop through their drawers, find the pills and know their business. Or their boyfriends see them taking the drug and get suspicious: Is that really for prevention, or do you have H.I.V.?

So when Ms. Makhandule, who volunteers with the Treatment Action Campaign, heard a few years ago that a clinical trial in South Africa was testing PrEP as a shot delivered once every couple of months, she thought: This is the solution we need. It would be private and invisible, and a woman would need to remember it only six times a year.

The clinical trial found the injectable PrEP to be a huge success, nearly eliminating women’s risk of contracting H.I.V., and to be 88 percent more effective than the daily pill. But there’s still no sign of those injections in Soweto.

“It will take long because money is always the problem,” said Ms. Makhandule, a veteran of South Africans’ fight for access to H.I.V. medications.

Talk of PrEP — and the promise of the long-acting, injectable version — dominated the global AIDS conference, an annual gathering of researchers, policymakers and activists, held in Montreal last month. The rate of H.I.V. infections has plateaued in recent years, at about 1.5 million new infections a year, and injectable PrEP is the first promising new H.I.V. prevention technology in a long time.

“This is the best chance we’ve ever had, in probably the entire history of the AIDS pandemic, to reimagine prevention and to do it with equity and with impact,” said Mitchell Warren, executive director of the H.I.V. prevention advocacy organization AVAC. “History will judge us very harshly if in five or 10 years, we go back to AIDS conferences and report on low uptake, and if we don’t see the rate of new infections begin to truly be pulled down.”

PrEP taken as a daily pill has been responsible for a decline in infection rates among men who have sex with men in high-income countries. However, the prophylactic has been slow to reach developing countries and has proved far less effective at blocking the virus in most groups, including young women, who make up a majority of new infections in sub-Saharan Africa.

The persistent stigma surrounding H.I.V. and the visibility of the drugs are big deterrents, said Dr. Linda-Gail Bekker, director of the Desmond Tutu H.I.V. Center at the University of Cape Town.

But the path to getting a more discreet, injectable PrEP to where it’s most needed is proving to be uncertain. As Ms. Makhandule noted, cost is a critical factor — as it has been through much of the global response to H.I.V. over 40 years.

The drug that aced the clinical trial is called long-acting cabotegravir, or Cab-LA, and it is made by the British pharmaceutical company ViiV Healthcare. ViiV is majority owned by the pharmaceutical giant GSK, with Pfizer and the Japanese drug company Shionogi as shareholders.

The only country where regulators have approved Cab-LA is the United States; the Food and Drug Administration authorized the injectable drug’s use in December. Cab-LA is priced at $22,200 per patient per year in the United States and will most likely be covered by private insurance plans and Medicaid, which already cover oral PrEP.

The Fight Against H.I.V.

An estimated 40 million people are living with H.I.V. worldwide. About 10 million of them do not have access to treatment.

In the euphoric period after the clinical trial results were announced in 2020, Viiv said that it would apply immediately to have the drug approved by regulators in all the African countries where it was tested.

Dr. Kimberly Smith, ViiV’s head of research and development, said, “Given how many disappointments we’ve had, including the vaccine studies that have not been successful, we have obviously got to do something dramatic, and this is potentially that dramatic thing.” She added that ViiV would aim for a “not-for-profit, not-for-loss price.”

The usual path to broaden access would be for the company to license generics makers to produce a cheaper version of the injectable for markets such as South Africa. But in March, Viiv announced that for the foreseeable future, it would not be granting licenses for generic makers, saying the company could find no partner capable of making the drug.

ViiV would not tell The New York Times the price it was proposing in developing countries, but Mr. Warren of AVAC said that the company told those working on the rollout that it expected the drug would cost $250 per person per year. Although that price is far lower than that in the United States, it is not nearly low enough for a country such as South Africa, which needs to administer hundreds of thousands of doses and where oral PrEP costs about $50 per person per year.

Drug access activists responded angrily to the idea that $250 a year was “accessible pricing” and demanded that ViiV commit to voluntary licensing of the drug.

Two days before the AIDS conference began, ViiV announced an agreement with the Medicines Patent Pool, a United Nations-backed nonprofit that works to make medical treatment and technologies accessible. The deal permits up to three generics companies to make the drug for sale in 90 low- and middle-income countries. It will take at least three years for a generic to be available for regulatory approval. ViiV has also submitted an application to the World Health Organization for prequalification of the drug, which could help expedite those approvals.

The deal leaves out all the countries where ViiV holds a patent on Cab-LA — including Brazil, where gay men and trans women volunteered for the trials in which the drug was tested.

“ViiV has not learned the lessons of the last 40 years because right out of the gate their pricing strategy is one that obstructs rather than conveys access,” said Asia Russell, executive director of the group Health GAP, which campaigns for drug access. “This is a pandemic-altering intervention, and any day lost is measured in preventable infections. ViiV must cut the price.”

AIDS researchers and activists believe that the company is worried about how much it may earn on Cab-LA because other H.I.V. prevention drugs are in trials as injectable PrEP, too. Some of these drugs have longer dosing cycles — that is, they could be injected only two or three times a year, which would probably appeal to more women, and could be synced with shots for contraception. Researchers also believe that ViiV might be concerned about what it would earn in the United States, typically a company’s most lucrative market. Cab-LA costs roughly the same as the brand-name oral PrEP drug Truvada in the United States, but a far cheaper generic oral PrEP is available.

A cost-of-goods study by the Clinton Health Access Initiative compared Cab-LA with similar products and concluded that Cab-LA could profitably be produced for $16 per patient per year — one-third the cost of oral PrEP in South Africa — assuming a volume of 800,000 patients. That price is estimated for production by a generic maker, most likely in India, not at ViiV’s plant in Britain. The analysis noted that the amount of active pharmaceutical ingredient — a key cost in drug production — for six injections per year would be far lower than that in 365 pills.

Dr. Smith of Viiv said that the study seriously underestimated the cost. “The complexity of cabotegravir manufacturing is significant,” she said.

At the recent AIDS conference, major global health agencies announced a new collaboration with charitable agencies and advocacy groups to try to broaden access to the injectable drug. They will work first on getting ViiV’s product into low-income markets, most likely by negotiating with the company over guarantees for purchase volumes that may entice it to agree to lower prices.

And in the longer term, the partners will provide funding to help makers of generic versions speed up manufacturing. The partners include the Children’s Investment Fund Foundation, which pledged $33 million to the effort this month, and the Bill & Melinda Gates Foundation.

But generics makers would be watching the other drugs in the pipeline and could act accordingly. “If you’re a generic company and you know that there may be a product that supersedes this in three to five years, it’s a very real question whether you spend money to make this one now,” Mr. Warren said.

Another obstacle is that injectable PrEP programs will need funding for more than just the cost of the drug. The shots would need to be administered by health care workers and would require syringes and other medical supplies. African governments that are considering rolling out injectable PrEP would need financial support from multilateral agencies such as the Global Fund to Fight AIDS, Tuberculosis and Malaria, so as not to take funds from other H.I.V. education and prevention initiatives, Ms. Russell said.

Donors committed $14.3 billion to the Global Fund at a meeting in New York last week, with many countries, including the United States, significantly raising pledges over those they had made in previous years. While further commitments are expected in the coming days from Italy and Britain, the fund is still likely to fall significantly short of its funding target of $18 billion.

As Ms. Makhandule, the community health worker, has found in Soweto, there is excitement all over sub-Saharan Africa about the idea of injectable PrEP. But there is also a need to prove that women will want and use it.

“We hear from many young people this would be ideal, but the proof is in the pudding,” Dr. Bekker said. It’s far from certain that healthy women will show up at a clinic every two months to get the shot, she said, and the key would be making it available in community clinics and framing it as part of a healthy sex life rather than as a medication associated with risk.

Dr. Smith said ViiV was hoping to learn from the history of long-acting injectable contraception such as Depo-Provera, which is delivered in a shot four times a year and which many women in the developing world choose as their preferred method of birth control. But there is no guarantee that bimonthly PrEP shots will gain favor because H.I.V. has a unique stigma.

Mr. Warren said that by the end of 2023, the new coalition hopes to have five large projects in different parts of the world. Each project would have about 50,000 participants, including sex workers and teenage girls, and would test whether they want the medication, will take it regularly or develop drug resistance.

ViiV has committed to supplying the drugs for only an initial implementation study in South Africa, and no donor has yet committed to funding others.

“The most important thing is to get this out there, into clinics and into people’s hands,” Dr. Bekker said.

‘In the middle of Covid-19 difficulties, historic turning points set in India-US ties’