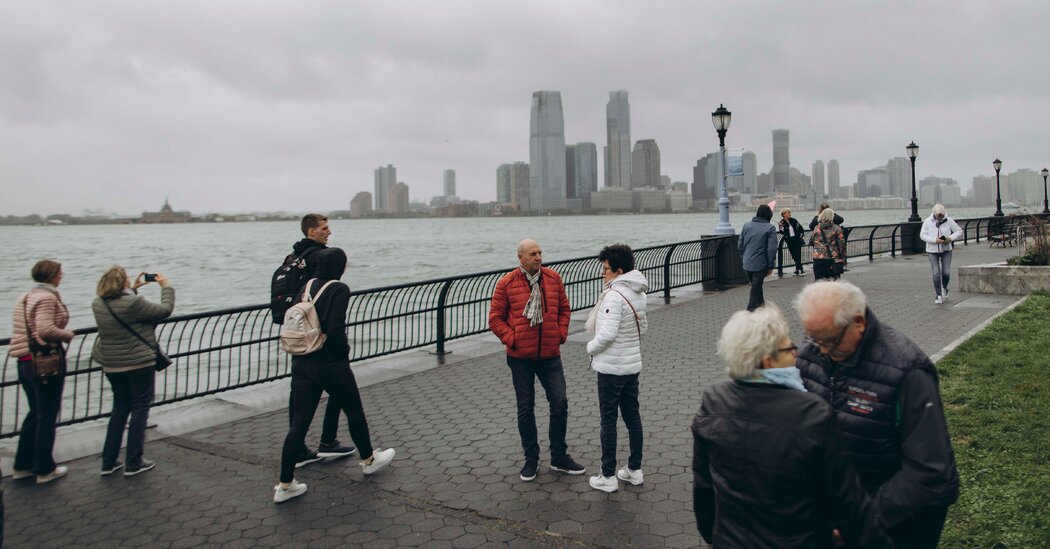 A resiliency plan would tear down Wagner Park in Lower Manhattan and rebuild it on higher ground, but some residents say it goes too far.

In the nearly three decades since Robert F. Wagner Jr. Park, a 3.5-acre green oasis built for leisure, openedin Battery Park City in Lower Manhattan, it has become a cherished backyard for residents and a destination for many others who come for the uninterrupted views of New York Harbor and the Statue of Liberty.

Now, an ugly fight has erupted over its fate.

Wagner Park is to be demolished and then rebuilt on higher ground by the Battery Park City Authority, a state-run public-benefit corporation, as part of a $221-million-plus resiliency plan to protect the south end of the neighborhood and Lower Manhattan from flooding, as climate change brings more intense and frequent storms and rising sea levels.

But the plan has drawn angry protests from some of the residents who live in the park’s surrounding high-rise towers. They say that demolishing the park goes too far. They have called for a less drastic approach that would make improvements to the existing park to achieve the same resiliency goal.

“It’s like, ‘In order to save the park, I have to destroy the park,’” said Kelly McGowan, 59, a finance executive who has lived in Battery Park City since 1989. “It makes no sense and we’re just trying to inject some rationality into this.”

Mr. McGowan and other residents banded together last year as the Battery Park City Neighborhood Association to quash a plan by then Governor Andrew M. Cuomo to build a monument to essential workers. The project would have taken away a large chunk of green space in Rockefeller Park at the north end of the neighborhood.

Now, they have mobilized to save Wagner Park. They have held rallies, consulted resiliency experts, and enlisted OLIN and Machado Silvetti, the design firms that helped create Wagner Park in 1996, to come up with an alternative.

Authority officials said they have repeatedly addressed such concerns in dozens of public meetings since 2016 and already incorporated community feedback into their plan. Making substantial changes now, they said, would result in years of delays that would set back their resiliency efforts.

“The cost of inaction — or significant delays to action — is really consequential,” said B.J. Jones, the president and chief executive officer of the Authority. “That’s why moving forward is really important.”

The fight over Wagner Park offers a glimpse of the challenges ahead as New York City tries to protect its shoreline from flooding. City officials, scientists and environmental experts have increasingly warned that the city has not done enough even as climate-change projections have grown more dire.

“There is an urgent need for us to act because the next catastrophe could come at any time,” said Mark Levine, the Manhattan borough president, who supports the Authority’s plan for Wagner Park.

For many New Yorkers, however, the way forward has been uncertain, confusing and acrimonious. A resiliency plan that cut down hundreds of trees in East River Park this year and last year drew fierce criticism from residents. (In Wagner Park, 48 trees will be removed, and 139 trees will be planted in the rebuilt park).

Such neighborhood conflicts are likely to become more common as resiliency plans are carried out by various city, state and federal agencies, which may take different approaches and not necessarily coordinate closely with one another or communicate effectively with residents.

“What the government is missing is a unified approach and a sole entity that is accountable to answer all the questions,” said Amy Chester, the managing director of Rebuild by Design, a nonprofit that works on making infrastructure more resilient.

Flooding is a particular threat to Battery Park City, a 92-acre planned community in Lower Manhattan that was built on landfill with construction debris from the original World Trade Center.

Still, Wagner Park did not flood during Hurricane Sandy because it sits at a relative high point, with an elevation ranging from 10 to 11.5 feet above sea level. Authority officials emphasized that they are preparing for future storms, which are projected to bring worse flooding.

Under their plan, the park would be rebuilt about 10 feet higher — at roughly 20 feet above sea level — and a flood wall would be buried underneath the lawns over the next two years. A pavilion that housed a small restaurant would be replaced by a pavilion that would take up a slightly smaller footprint at ground level, but have additional space below for park and restaurant operations.

“I do believe that we have — through the process of extensive dialogue and analysis — arrived at the best possible and really the only truly viable option.” said Gwen Dawson, a vice president at the Authority.

But the neighborhood association has not accepted that. Residents sought out Lucinda Sanders, the chief executive of OLIN, who was the lead project manager on the original Wagner Park. Ms. Sanders, who is not being paid, suggested another option: Keep the existing park and build a permanent wall behind the lawns and gardens.

The wall would have openings that could be manually closed up during storms, Ms. Sanders said. Since the back edge of the park already rises about 11.5 feet above sea level, the wall would only have to go up to about 7 feet, and could potentially be integrated with the back wall of the pavilion.

“The current plan is one solution to the problem,” Ms. Sanders said. There is likely another way to do this that preserves the overall integrity of the park as we know it today.”

Authority officials, who have not seen Ms. Sanders’ plan, said they had previously considered an option to install flip-up barriers along the back of the park, and rejected it. Residents will unveil the alternative plan at a virtual public meeting on Oct. 27.

Tensions have flared in recent months as Authority officials have refused to delay their plan. The neighborhood association has called on Governor Kathy Hochul, a Democrat, to intervene. Ms. Hochul has not responded, but her Republican challenger, Lee Zeldin, has spoken against the Authority’s plan. He also appeared at a recent rally against it.

Chris Ward, a former city environmental protection commissioner and chairman of the Waterfront Alliance, a nonprofit, said the Authority’s plan should not be held up by residents who do not want to see their park torn up. “It is inconceivable that we allow these parochial self interests — after all of the community meetings, process and science,” he said. “The future of New York as a harbor city will be deeply threatened.”

The neighborhood association said that the Authority’s plan was pushed through during the pandemic, when many people were distracted or living elsewhere, and that residents did not learn crucial details about the redesign of Wagner Park until earlier this year. Residents protested this summer after realizing there would be a significant reduction in lawn space from the existing park.

In response, Authority officials said they cut back on the gardens and pathways to increase lawn space, though it is still 10 percent less than the existing park. The changes cost several hundred thousand dollars, they said.

Mr. Jones said they have been transparent in developing their plan, including posting information online. “It wasn’t a big reveal in May what the design was going to be, this has been a process that everyone has had the opportunity to be part of along the way,” he said.

Not all residents are against the demolition and rebuilding of the park. Jeff Galloway, 68, a litigation finance consultant, said that elevating the park was the best option “out of a bunch of bad alternatives” that would be more disruptive to the community. “If you could keep the park as it is, that would be great,” he said. “That does not seem to be physically possible if you accept the climate change projections.”

But Britni Erez, 40, a member of the neighborhood association, said that Wagner Park was too important to families like hers to demolish without carefully considering every possible option. When her husband, who is a doctor, was based at a Brooklyn hospital during a peak in the pandemic, their family would reconnect in their neighborhood parks.

“They should have dug deeper on an alternative,” she said. “We’re not climate deniers, we’re not saying ‘Don’t do anything.’ We want a better resiliency project.”

Protest, sloganeering in Rajya Sabha by opposition against Bill offering much more abilities to...

Registration for Amarnath Yatra to start from April 1