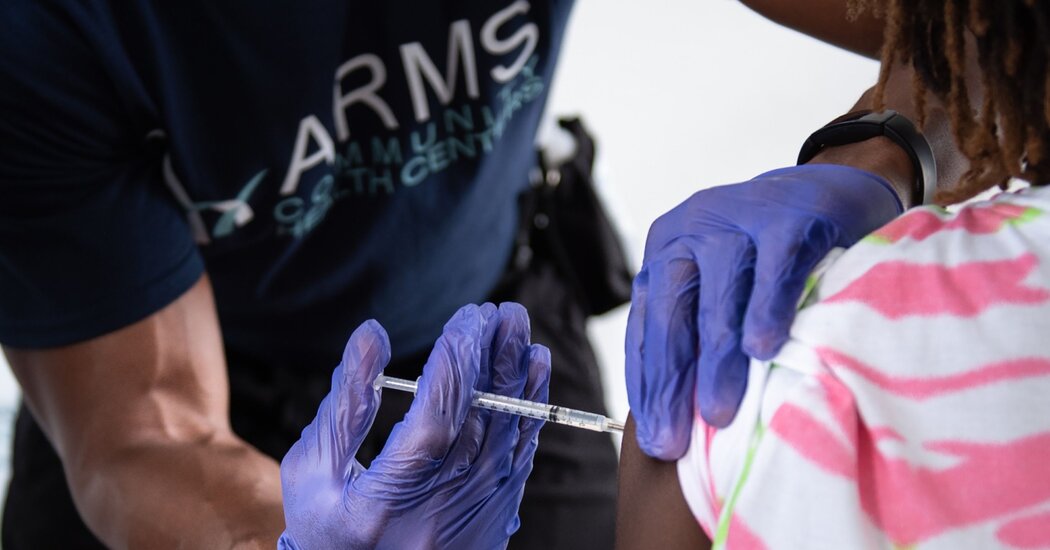 We revisit the subject of Covid and racial inequities.

The Covid mass vaccination program in the U.S. began on Dec. 14, 2020, when a nurse at a hospital in Queens, N.Y., received a shot on live television.

But more than two months later, a major health clinic based in North Birmingham, Ala. — which focused on lower-income, Black and Latino residents — still had not given a single vaccine dose. The clinic, Alabama Regional Medical Services, was not able to give shots because it had not received any from the state supply.

The reasons were a matter of dispute. Alabama officials insisted that other Birmingham clinics had signed up first, exhausting the initial supply. Some officials in North Birmingham, however, believed that the state’s white, Republican leadership was ignoring heavily nonwhite, Democratic neighborhoods.

“The long and short of it,” Chris Mosley, who oversaw outreach for the clinic, told me, “was that the Black neighborhoods didn’t have vaccines and the white areas did.”

Birmingham may have been an extreme case, but it was also part of a pattern. Around the U.S., many Black and Latino communities had limited early access to the Covid vaccines. That lack of access — combined with greater vaccine hesitancy among some people of color — contributed to racial gaps in vaccination and, by extension, large racial gaps in Covid death rates.

In today’s newsletter, I want to tell you the story of what ended up happening in Birmingham, as a way of revisiting the larger issue of Covid and race.

By late February 2021, Mosley was able to use his political contacts to alert the Biden administration to his clinic’s lack of vaccines. His plea for help arrived when White House aides, then in their first weeks in office, were looking for ways to narrow the racial gap in vaccinations. “The natural social history of many diseases is that they tend toward inequality, unless you intentionally combat it,” said Dr. Cameron Webb, a pandemic adviser in the Biden administration.

The Trump administration had seemed uninterested in combating those inequities, leaving it up to states. President Biden made closing the gaps a priority. “We built our Covid response with equity at the heart of it,” Ron Klain, the White House chief of staff, told me.

The administration diverted some vaccine doses from state stockpiles directly to community health clinics. It created a working group across agencies to spread successful ideas. It put federal clinics in Black and Latino neighborhoods. It also helped local organizations set up clinics at churches, barbershops and beauty salons. “In more affluent communities,” Webb said, “people had choices about where they felt confident getting vaccinated.”

As Mosley said, “People would call me and say, ‘I hear you’ve got vaccines over there. Can we get some?’” He added, “It’s turned around in a major way.”

In the spring of 2021, several months into the mass vaccination program, white Americans were significantly more likely to have been vaccinated than Black or Latino Americans. By late 2021, the Hispanic rate was higher than the white rate, and the Black rate was almost as high as the white rate, according to the C.D.C. As a result, the racial gap in death rates has also disappeared.

That disappearance is arguably one of Biden’s biggest accomplishments — one that would not have happened, to be clear, without passionate advocacy and hard work by many community health officials. In a country with deep racial inequities, where Covid was initially another tragic example, the virus is no longer disproportionately harming Black and Hispanic Americans.

Yet this accomplishment continues to receive relatively little attention. Why is that?

I first wrote about the reversal of the racial gaps in June, and that newsletter upset some health care experts. They believed I had made a mistake by focusing on overall death rates rather than age-adjusted rates. And there is a fair debate about when to emphasize each one.

Overall death rates are the primary way that many organizations (including The Times, on its Covid dashboards, and the C.D.C., in its annual mortality report) describe a disease’s toll. This rate offers a census of who’s dying. If one group’s death rate is higher than another’s, it means the victims of that disease come disproportionately from the first of the two groups.

But an age-adjusted rate also has advantages. It effectively compares a disease’s toll with its expected toll based on the age profile of different groups. For that reason, the C.D.C.’s mortality report also includes age-adjusted tables — just after the overall tables — for each cause of death. Because white Americans are older than Black or Latino Americans on average and because most diseases affect the old more than the young, age-adjusted rates tend show larger racial gaps.

If this statistical detail is making your head hurt, I have some good news: It doesn’t affect the main conclusions about Covid and race. By both the overall and age-adjusted measures, the Covid death rates for Black and Latino Americans were higher than the white rate in the early stages of the pandemic, and they remain higher cumulatively. Recently, though, the patterns have changed, and the Black and Latino rates are no longer higher.

The overall Black and Latino rates have been generally lower than the white rate for more than a year:

“The inequities have largely dissipated in recent weeks and months, even after adjusting for age,” Katelyn Jetelina, an epidemiologist who writes a popular newsletter, told me. “This is absolutely a success story about public health: Targeted, local outreach and stakeholder engagement and investment can overcome decades of health inequities.”

If you listen to much of the public discussion about Covid, however, you still might not know about the change in the racial gaps. You might be unaware of a public health success story, with potential lessons for reducing the country’s other stark racial inequities — in incomes, housing, education, criminal justice, the medical system and many other realms.

There are even lessons for future Covid policy. Absent a continued effort, racial gaps could open in booster rates or access to Paxlovid, a drug that reduces Covid symptoms.

There seem to be multiple reasons that the Covid story has been mostly overlooked. In our polarized country, many conservatives are reluctant to call attention to any accomplishment of Biden’s. Many liberals, meanwhile, feel uncomfortable calling attention to any decline in racial or economic inequity, because they worry it minimizes those problems. Some liberals have also been hesitant to talk about positive Covid news, believing that the country is still too blasé about the virus.

But it should be possible to acknowledge the full picture. For all of the misery that Covid has brought, it has also become a case study that should remind us racial injustice can sometimes be overcome.

Advice from Wirecutter: Pickleball at home.

Lives Lived: Sacheen Littlefeather, an actress and Apache activist, helped Marlon Brando protest Hollywood’s depictions of Native Americans. On his behalf, she refused his Academy Award in 1973. Littlefeather died at 75.

“Systemic” abuse: An investigation found that the U.S. Soccer Federation and N.W.S.L. failed to provide a safe environment for players.

A Nets debut: Ben Simmons scored six points in his first N.B.A. basketball game in 470 days yesterday, ending a peculiar absence — and facing the team he refused to play for a year ago.

Why were people sitting behind home plate at recent Mets and Yankees games smiling menacingly? It was a promotion for a new horror film, “Smile.” Parker Finn, the film’s director, told The Times, “I wanted the smile to be a mask to hide evil’s true intentions.” Over the weekend, the film topped the box office rankings for North American theaters.

This hearty bean soup gets better with time.

An Anthony Bourdain biography is light on subtlety, heavy on grit.

The hosts discussed a new book about Trump.

The pangrams from yesterday’s Spelling Bee were carotid and dictator. Here is today’s puzzle.

“The Daily” is about the Supreme Court.

Los Angeles Enjoys Its New Bridge a Little Too Much

No BJP tickets to those over 60, relatives of politicians: Gujarat Chief CR Patil