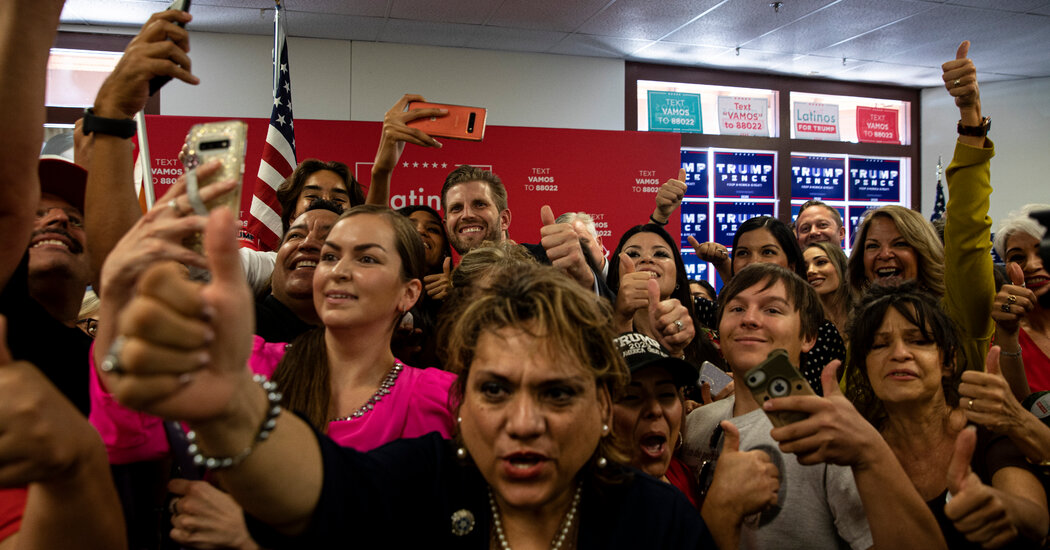 Democrats lost ground with Hispanic voters in 2020. It doesn’t seem to have been a blip.

But then something changed.

The economy became even stronger at the start of Trump’s presidency than it had been during Obama’s. The Democratic Party moved further to the left than it had been under Obama. Trump turned out to have a macho appeal, especially to some Hispanic men. And some Hispanic voters became frustrated with the long Covid shutdowns.

Whatever the full explanation, Hispanic voters have moved to the right over the past several years. As a group, they still prefer Democrats, but the margin has narrowed significantly. In 2020, Joe Biden won the group by only 26 percentage points. And in this year’s midterms, the Democratic lead is nearly identical to Biden’s 2020 margin, according to the latest New York Times/Siena College poll — a sign that the shift was not just a one-election blip:

The problem for Democrats is that winning the Hispanic vote by only 20 points may not be enough for the party to accomplish its main goals.

“Let’s not forget that 2020 levels of Hispanic support were nearly catastrophic for Democrats,” Nate Cohn, The Times’s chief political analyst, told me. It helped cost the party House seats in California, Florida and Texas and allowed Republicans to win statewide races comfortably in Florida and Texas. It nearly helped Trump win re-election.

Democrats need to do better with Hispanic voters (or reverse some of their recent losses with white voters) to build solid congressional majorities. The party currently controls the Senate by only a single vote, and Republicans are favored to take control of the House in this year’s midterms.

“The whole theory of Democrats really benefiting from demographic change rests on them winning the Hispanic vote by a wide margin,” Nate says. Without a better showing, Democrats probably cannot flip Florida or Texas, even as they face a growing Republican threat in the Midwest because of the continuing drift of white voters away from Democrats.

In today’s newsletter, I’ll explore why a meaningful minority of Hispanic voters also appears to be shifting right.

As you think about the data below, I encourage you not to focus all of your attention on which answers receive support from most respondents. Remember that Democrats don’t merely need to win Hispanic voters; the party needs to do so handily. When only a narrow majority of Hispanic voters favors the Democratic position, it’s a sign that Republicans could seize on the issue to gain voters.

Nate tried to figure out which Hispanic voters were moving right by creating a subgroup of poll respondents: people who said they had voted for a mix of Democrats and Republicans in recent elections and said they were planning to vote Republican this year.

This subgroup made up 17 percent of all Hispanic voters. More were registered as Democrats than Republicans, despite their voting intentions this year. They were even more heavily skewed to the working class (with about 80 percent not having a bachelor’s degree) and the young (with almost 60 percent under 45) than Hispanic voters as a whole. More than half were men, but the group also included many women.

By a wide margin, people in the subgroup said that the Democratic Party had moved too far left on social issues. By an even wider margin, they said that economic issues like jobs, taxes and the cost of living would influence their 2022 voting more than social issues like guns, abortion and democracy would.

At the root, the Hispanic voters drifting to the right appear to be pocketbook voters, focused more on their daily lives than divisive national debates.

From left to right

Looking more broadly at all Hispanic adults, I find the below chart to be helpful. It shows 10 questions from the poll, ranked from liberal to conservative, based on the responses from Hispanic respondents:

Neither gun policy nor immigration, for example, are as strong of an issue for Democrats as many people might assume. “I know this country is a country of immigrants, but they should immigrate in a legal way,” Amelia Alonso Tarancon, 69, who lives outside Fort Lauderdale, Fla., told The Times.

The most nuanced issue may be the economy. On the one hand, Hispanic Americans say that the Democrats are the party of the working class and agree with many Democratic positions. And yet the issue is still a problem for the party.

My colleague Jennifer Medina, who’s based in California and covers politics, told me that she thought Democrats’ identity as the working-class party cut both ways. “I’ve spoken to several Latinos, particularly men, who have told me a version of this: ‘I grew up hearing that Democrats were the party of the poor. But I don’t want to be poor, so I became a Republican,’” Jennifer said. Many of them, she added, run small businesses.

Another problem for Democrats, according to the poll, is that many voters — across racial groups — appear to be unaware of the substance of the economic policies that Biden and Democrats have enacted on infrastructure, health care, energy and more. Many of these policies appear to be too subtle and complex for voters to understand.

(This recent story — by Jennifer, Jazmine Ulloa and Ruth Igielnik — goes into more detail on the strengths of both the Republican and Democratic Parties among Hispanic voters.)

For much of the past few decades, Hispanic voters supported the Democratic Party so strongly that many people came to think of them as a safe Democratic constituency, along with Black voters, Jewish voters and secular college graduates. Instead, Hispanic voters appear to fall somewhere between these reliably progressive groups and working-class whites — and have become a crucial swing group in American politics.

Treating migrants as political props is un-American, but Biden needs a plan to secure the border, Bret Stephens argues.

A trove of belongings: What Ernest Hemingway left in Sloppy Joe’s Bar 80 years ago.

Nostalgia: The second coming of the appletini.

Advice from Wirecutter: Turn off your phone’s location access.

One shy: Aaron Judge is on the brink of matching Roger Maris’ American League home run record after hitting his 60th shot of the season in the Yankees’ thrilling 9-8 win last night, which included a Giancarlo Stanton walk-off grand slam.

As the LIV turns: LIV golfers sent a letter yesterday asking for the rebel league’s tournaments to count for Official World Golf Ranking (points), another turn in a saga that has fractured golf. Unless a rare exception is made, the new tour doesn’t match OWGR standards for qualification.

The N.F.L.’s next great pass rusher? Micah Parsons is drawing comparisons to Lawrence Taylor in just his second season. He has four sacks through two games and is the favorite to win Defensive Player of the Year.

Bad Bunny earned 10 nominations from the Latin Grammy Awards yesterday, the most of any artist. It’s no surprise: Look anywhere in entertainment and you’ll probably see him.

Hollywood? He had a role in the summer blockbuster “Bullet Train.” The charts? His new album, “Un Verano Sin Ti,” has been the No. 1 record in the U.S. for 11 weeks this year. You can even spot him on the beach with Snoop Dogg in a Corona commercial. “He keeps breaking records and climbing skyward,” Rolling Stone wrote.

This chocolate mousse is made in a blender.

The new Hulu comedy “Reboot” pokes fun at TV’s obsession with bringing back past shows.

“Getting Lost,” a diary by the French writer Annie Ernaux, recounts an all-consuming Paris romance.

The pangram from yesterday’s Spelling Bee was bathroom. Here is today’s puzzle.

P.S. “We announce the establishment of the People’s Republic of China,” Mao Zedong said 73 years ago today.

“The Daily” is about migrants. On “The Argument,” what does it mean to be a transgender feminist?

EXCLUSIVE | The wicket can’t be ‘unplayable’ just because it assists spinners, says Pragyan...