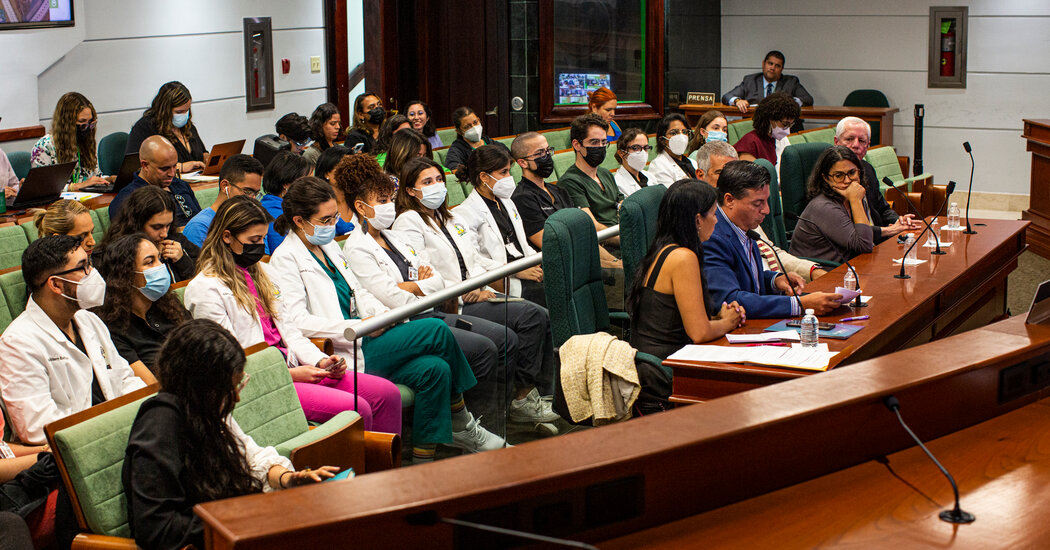 Long-dominant political parties are losing power to new ones, including one trying to limit abortion in one of the few U.S. jurisdictions where it remains unrestricted.

Now, with just one senator and one representative in the Legislative Assembly, Dr. Vázquez’s upstart party, Project Dignity, has helped lead a new attempt to limit abortion on the island, one of only a handful of U.S. jurisdictions where the procedure remains legal at any point during pregnancy.

The abortion fight is the clearest sign yet that Puerto Rican politics, long focused on whether the island should keep its territorial status or seek to become a state, are realigning. Fed up with how the status issue has overshadowed fixing people’s day-to-day problems, voters have begun coalescing around new parties focused on social issues and partisan ideology. As a result, legislative debates have begun to look a little more like those between Democrats and Republicans in the states — giving conservatives an opportunity to grow their power.

“We do want to defend children before birth and our other particular ideological issues,” Dr. Vázquez said in a recent interview. “But fundamentally we want to turn back 40 years of government corruption.”

In June, the Puerto Rico Senate passed legislation banning abortions after 22 weeks, without exceptions for rape or incest. Five days later, the U.S. Supreme Court overturned Roe v. Wade. Puerto Rico lawmakers have since filed a flurry of other bills limiting abortion, including one from Project Dignity that would prohibit it after about six weeks of pregnancy, signaling an increasingly aggressive stance among some lawmakers against the procedure.

Even if the relatively modest 22-week ban ultimately fails — lawmakers in the House of Representatives appear cooler to the idea — abortion rights backers in Puerto Rico fear that they are now up against two anti-abortion strategies that have been successful in many states: chipping away at legal abortion with piecemeal restrictions, and seeking to eliminate it altogether, a tactic that has gained momentum since the end of Roe.

“It’s a hostile and difficult environment,” said Dr. Yarí Vale Moreno, an obstetrician and gynecologist who runs an abortion clinic in San Juan, the capital. “We would go backward, as has happened in the states.”

In the aftermath of economic crisis, bankruptcy, Hurricane Maria, political scandal and the coronavirus pandemic, Puerto Ricans have started to abandon traditional parties defined by whether the island should remain a commonwealth, become a state or seek independence, moving instead to fledgling ones more concerned with social issues, like Project Dignity.

“I think the traditional parties are going to blow up in the next five years,” said Eduardo Bhatia, a former Senate president from the pro-commonwealth party who now teaches at Princeton. “You’ll have two parties, liberals and conservatives. We’re going to be something more similar to Democrats and Republicans.”

Mr. Bhatia added that community activists who were part of the political machine and used to organize for campaigns have been replaced over time by largely evangelical pastors, especially outside of the San Juan metropolitan area.

In Puerto Rico’s last election, in 2020, many younger voters drifted to Citizen Victory Movement, a party whose leaders say that solving the island’s economic and social problems is more important than settling the status question. Some Christian conservatives moved to Project Dignity. Most Puerto Ricans are Catholic, and a Pew Research survey found in 2014 that of the 33 percent on the island who identified as Protestant, roughly half also identified as born-again Christians.

The result is a difficult-to-label legislature that has strengthened penalties against gender-based violence but is also considering abortion restrictions — a dynamic that challenges the notion held by many in Washington that if Puerto Rico were a state, it would be a liberal haven.

“This is a legislature that reflects Puerto Rico’s complexity,” said Senator Ana Irma Rivera Lassén, a member of Citizen Victory Movement, who has filed legislation to codify the right to abortion. “No one has an absolute majority right now. You always have to look for votes on the other side.”

The day after the high court overturned Roe, Representative Lisie J. Burgos Muñiz, of Project Dignity, filed a bill to penalize women who have abortions with a 99-year jail term. She withdrew the proposal a day later, amid fierce backlash, but had revealed an intent to pursue more strident policies.

Abortion has a complicated history in Puerto Rico. It was criminalized in 1902, four years after the United States colonized the island, though the procedure was allowed to save the life of the mother. Access was broadened in 1937 to include protecting the mother’s health as part of a law that also promoted the mass sterilization of women, fueling mistrust in the health care system. The law prompted a network of clandestine abortion providers to form.

Before the initial Roe decision in 1973, affluent pregnant women sometimes traveled to the island from the states for abortions, in trips that became known as “San Juan weekends.” After Roe, pregnant women from countries in Latin America and the Caribbean continued to seek abortions in Puerto Rico. The Puerto Rico Supreme Court ruled in 1980 that abortion was protected under a clause in the island’s Constitution that guaranteed the right to intimacy.

“Puerto Rico is generally more conservative than liberal,” said Kenneth McClintock, a former Puerto Rico secretary of state and Senate president from the pro-statehood party, who described himself as “more liberal than conservative.”

But from a practical standpoint, poverty, domestic violence and lack of access to sex education and health care have made abortion an important right for many Puerto Rican women. And with the island’s territorial status dominating the public discourse, abortion and other social issues have not historically influenced Puerto Rico politics the way they have in the states.

Abortions on the island are limited by lack of access and physicians willing or trained to carry out the procedure later in pregnancy. Years of economic instability have led to massive brain drain, especially in the medical field, which since the pandemic has experienced a further shortage of personnel. Today, Puerto Rico, which has a population of about 3.2 million, has fewer than 100 gynecologists.

The number of abortion clinics on the island has plunged to four from 43 in 1980, according to the Pro-Life Association of Puerto Rico. Abortion rights backers dispute the older figure; the Puerto Rico Health Department listed the number of clinics in 2000 as eight.

Three of the four remaining clinics — all clustered in the San Juan area — provide abortions up to around 14 weeks of pregnancy, according to the providers; in the fourth clinic, Dr. Vale provides abortions up to 24 weeks. Abortions past that point are performed at University Hospital, and only for fatal fetal conditions or if the mother’s health is at risk.

The Puerto Rico Health Department reported 4,225 abortions at the clinics last year. Most were for women up to 10 weeks pregnant. One abortion was performed at 21 weeks and none later, although the gestational period for three abortions was unavailable.

At recent hearings held in the Puerto Rico House, providers — many of whom wore green to symbolize abortion rights — emphasized the needs of poor women with limited access to health insurance and victims of gender-based violence, which has been so pervasive that last year the government declared it an emergency.

Last month at the Iella clinic in San Juan, which raises funds to help defray the costs of abortion care for about a quarter of its patients, Frances Collazo Cáceres, the clinic’s legal adviser, said providers have faced increasing harassment, especially online, as the abortion debate has escalated.

Opponents have waged periodic campaigns to restrict the procedure here. In 2019, lawmakers required parental consent for abortions for girls under 18 and a 48-hour waiting period for all abortions, the sort of incremental limits that many states adopted much earlier.

But the governor at the time, Ricardo A. Rosselló, a Democrat from the pro-statehood party, vetoed the legislation. The legislature, which was controlled by his party, was one vote shy of overriding his veto. Project Dignity made its public debut shortly after.

About seven years ago, Christian missionaries from Tampa, Fla., opened Puerto Rico’s first anti-abortion “crisis pregnancy center” in Bayamón, near San Juan, a few blocks away from an abortion clinic. One recent morning, Liza Arroyo and Abdiel Contreras, activists from the center, waited outside the clinic, trying to persuade women to keep their pregnancies.

Mr. Contreras, 40, backs Project Dignity’s proposed six-week abortion ban, which is tied to the start of fetal heartbeat activity. But he said he was skeptical that lawmakers would pass it, calling them more liberal than their constituents.

“People don’t believe in abortion,” Mr. Contreras said. “But the legislature is not the voice of the people.”

He said he used to vote for Puerto Rico’s pro-independence party, until it took on more liberal social issues. He stopped voting for a few years, feeling that no party represented him.

You Need Only 7 Ingredients