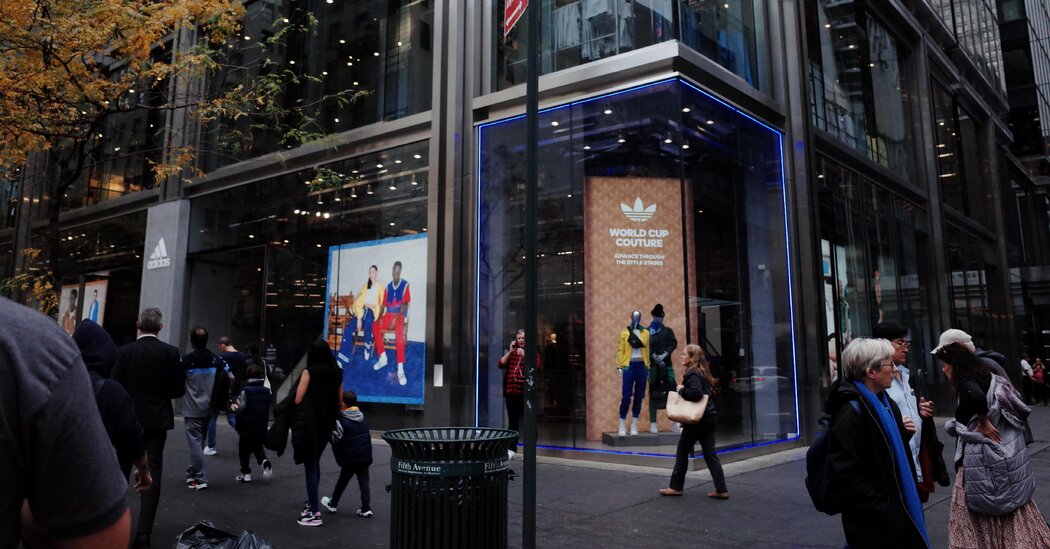 The German sportswear company slashed its yearly forecast after dropping the popular Yeezy line over hate speech by its creator, Kanye West.

Adidas, just weeks after severing its very profitable relationship with the rapper and designer Kanye West, said on Wednesday that it would need to cut revenue and earnings forecasts for a fourth time this year.

The German company, the world’s second-largest sportswear brand, said the lowering of its guidance for the year was linked to the termination of its partnership with Mr. West, who now goes by Ye, along with costs linked to its exit from Russia after the invasion of Ukraine and continuing difficulties in Chinese markets.

In its third-quarter earnings report, Adidas projected revenue growth for 2022 in the low-single-digits percentage range, and said its operating profit margin would be around 2.5 percent. Those forecasts have deteriorated consistently from quarter to quarter. At the beginning the year, the company forecast revenue growth of as much as 13 percent, and an operating margin of up to 11 percent.

The Yeezy line of shoes and clothing developed with Ye has been hugely popular and accounted for about half of Adidas’s total profits, according to analysts. On Oct. 25 the company cut its ties to with Ye after he made a series of antisemitic remarks and embraced a slogan associated with white supremacists, a move the company said would cost it 250 million euros ($246 million) this year.

On Wednesday, Adidas stressed that it retained the intellectual property and design rights to Yeezy products that had been developed but not yet hit the market. It said “interesting plans” were being developed for the goods.

Kanye West, the rapper and fashion designer who now goes by Ye, has been at the center of several controversies.

“It’s our product,” Harm Ohlmeyer, the chief financial officer, told reporters on Wednesday. “We intend to make use of these rights as early as in 2023.”

Mr. Ohlmeyer refused to give any details about the process behind Adidas’s decision to sever ties with Ye, a move critics said was overdue. Companies including Gap and the French designer Balenciaga, whose fashion show Ye opened in Paris in October, had moved weeks earlier to distance themselves from the rapper.

On Tuesday, the company said it had appointed Bjorn Gulden, until recently the head of Adidas’s rival Puma, as its new chief executive. He will succeed Kasper Rorsted, who had previously announced that he would leave Adidas.

Mr. Gulden helped turn around the fortunes of Puma, which he had led since 2013. Investors welcomed the news of his move; Adidas’s stock has climbed more than 27 percent after his departure from Puma was announced on Friday.

The partnership between Adidas and Ye, which began in 2013 after the rapper had a fallout with Nike, helped catapult Adidas into the lucrative sneakerhead market, giving the brand increased relevance in the United States and other markets.

As part of the fallout over the dropped Yeezy line, Okabashi, a producer of footwear based in Georgia, said that it was forced to lay off 142 employees who had been manufacturing shoes for the popular line. The company had been working with Adidas since April 2020, it said in a statement.

It declined to give any indication of what would happen to Yeezy shoes that had already been produced, saying only that it was “coordinating with Adidas on a rage of matters related to the closing of the Yeezy product line.”

Yeezy goods are not the only products swelling Adidas’s inventory, Mr. Ohlmeyer said. A significant amount of Adidas stock is also in China, where stores have been forced to close because of Covid lockdowns, and sales had already been sluggish because of a boycott of Western brands earlier this year.

Adidas and Puma are based in the southern German town of Herzogenaurach, where the companies were each founded by one of the Dassler brothers, Adolf and Rudolf, who split ways after World War II. Puma named its chief commercial officer, Arne Freundt, to replace Mr. Gulden as chief executive.