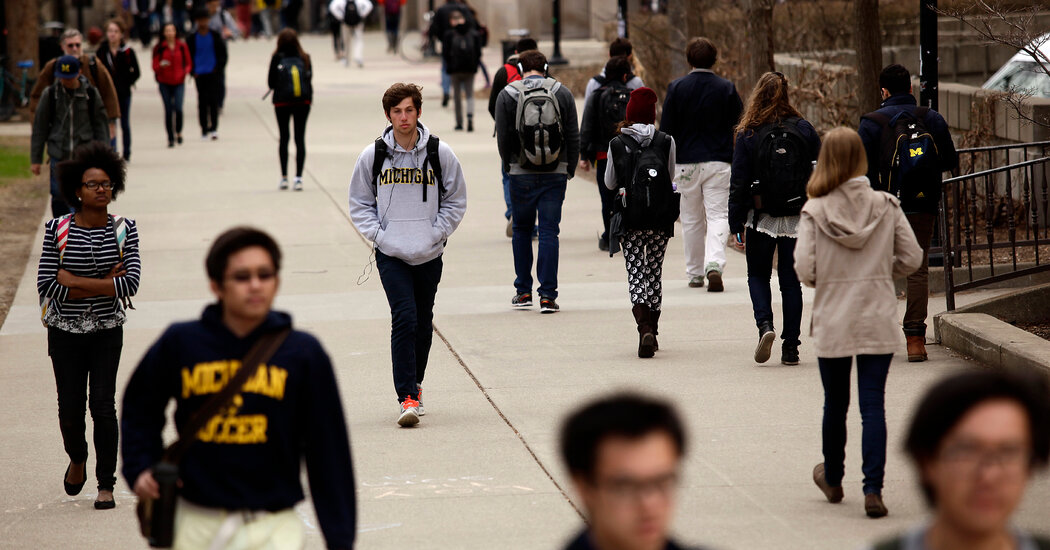 As a Supreme Court case on college admissions nears, the California and Michigan university systems say their efforts to build diverse classes have hardly worked.

Since then, both systems have tried to build racially diverse student bodies through extensive outreach and major financial investment, well into the hundreds of millions of dollars.

Those efforts have fallen abysmally short, the universities admitted in two amicus briefs filed this month at the Supreme Court, which is set to consider the future of affirmative action in college admissions this fall.

Among the data points: In 2021, the entering freshman class at the University of California, Berkeley, included 258 Black students and 27 Native American students out of a class of 6,931. That same year, Black enrollment at Michigan’s flagship campus in Ann Arbor was 4 percent, even as the university maintained a special admissions office in Detroit to recruit Black students.

The outreach programs are extremely costly. The University of California system says it has spent more than a half-billion dollars since 2004 to increase diversity among its students.

In the briefs, lawyers for the universities argue that, without affirmative action, achieving racial diversity is virtually impossible at highly selective universities.

“Despite persistent, vigorous and varied efforts to increase student body racial and ethnic diversity by race-neutral means,” the brief from Michigan stated, “the admission and enrollment of underrepresented minority students have fallen precipitously in many of U-M’s schools and colleges” since the end of affirmative action.

Justin Driver, a professor at Yale Law School, said the stories of California and Michigan illustrate the fallout that can take place when affirmative action is banned in admissions.

“Despite incredibly valiant, sustained efforts to navigate the realities of a post-affirmative action world, the flagship campuses in California and Michigan have been unsuccessful in enrolling members of marginalized racial groups,” said Mr. Driver, who is considered an expert on the impact of the high court’s education decisions.

The Supreme Court is scheduled on Oct. 31 to hear the lawsuits brought by the anti-affirmative action organization Students for Fair Admissions that challenge the race-conscious methods that Harvard and the University of North Carolina use to pick freshman classes.

The organization says that Harvard discriminates against Asian Americans and that North Carolina gives an admissions boost to underserved racial minorities. And the group argues in its own brief, filed this week, that ending affirmative action nationwide would help improve diversity at the University of California and the University of Michigan, “because they could better compete with universities who currently use race.”

With the Supreme Court’s recent shift to the right, the affirmative action cases could upset 40 years of precedent that says race can be considered as one factor in determining university admission.

Such a shift could have significant implications for universities, many of which have argued that diverse environments enhance learning by exposing students to a variety of perspectives.

Affirmative action is banned by local edict in nine states, including Michigan and California. Some states without affirmative action programs, like Oklahoma, have taken the opposite position in briefs to the court, arguing that the University of Oklahoma “remains just as diverse today (if not more so) than it was when Oklahoma banned affirmative action in 2012.” Thirteen other states joined the Oklahoma brief.

Oklahoma’s freshman class in 2020, according to data released by the university, was 61 percent white, 12 percent Hispanic, 3.7 percent Black and 2.1 percent American Indian. The state’s brief points out that a large number of students identified as “two or more races” and that the number of those who were part Black would increase the Black percentage to more than 6 percent. Black residents make up 7.8 percent of the state’s population.

A brief filed by last year by Ken Paxton, the Texas attorney general, also takes the side of Students for Fair Admissions, arguing against race-conscious admissions, even though the University of Texas uses a form of them.

The brief criticizes not only affirmative action, but diversity itself, stating, “Indeed, the very justifications for ‘diversity’ require invidious racial stereotyping.”

Michigan and California are both known for highly rated schools that receive thousands of applications from across the country. With admissions extremely competitive, applicants from underrepresented groups face higher obstacles to enrollment.

At the University of Michigan, a voter referendum known as Proposal 2, Affirmative Action Initiative, was adopted in 2006, resulting in a state constitutional ban on race-conscious admissions. That prompted sharp drops in enrollment of Black and Native American students. Since then, Michigan has worked to diversify its student body through outreach programs.

They include a college advising corps of young Michigan alumni, as well as a recruitment office in nearby Detroit, a predominantly Black city. Additional incentives include generous scholarships.

Calling Proposal 2 an “involuntary experiment” imposed on the university and acknowledging that its diversity profile has since suffered, a Michigan spokesman, Rick Fitzgerald, said that the university’s experience should serve as a “cautionary tale that underscores the compelling need for selective universities to be able to consider race as one of many background factors about applicants.”

What’s more, fully one-quarter of underrepresented students surveyed felt they did not “belong” at Michigan, a 66 percent increase in a decade, the brief said.

At Michigan’s Ross School of Business, Rita Brooks was one of 74 Black students among the 2,421 undergraduates enrolled in 2021.

“While I’m thankful for the incredible resources and the education, it’s difficult to ignore the isolation felt in classroom settings where you’re one of two Black students at the most,” said Ms. Brooks, who is from the Detroit area.

Some prospective students have said they view the low undergraduate Black enrollment at Michigan as a reason to go elsewhere, illustrating how low numbers can further deter the enrollment of students of color.

Aniya Caldwell, of Jackson, Mich., was president of her high school’s National Honor Society in 2020, but she chose to attend Howard University, the historically Black college in Washington, D.C.

“The diversity at the University of Michigan is minuscule,” Ms. Caldwell said in a LinkedIn message. “Overall, I chose to go to Howard because I knew I’d be surrounded by people of color and not have to worry about additional racism and discrimination.”

In California, Proposition 209 was adopted in 1996, banning racial preferences in admissions. By the fall of 2006, there were 96 Black students in a freshman class of nearly 5,000 at the University of California, Los Angeles.

The Black enrollment figure was so low that it shocked the U.C.L.A. community, resulting in the group’s nickname — the “Infamous 96.”

Since then, enrollment of underserved minorities in the California system has partially recovered. For example, U.C.L.A.’s Black enrollment, 7 percent before Proposition 209 was adopted, fell to 3.43 percent in 1998. By 2019, it had increased to 5.98 percent. California’s population is 6.5 percent Black.

But lawyers for the University of California system describe an uphill battle to achieve diversity, particularly at the most highly selective schools.

While 52 percent of California’s public high school students identify as Hispanic, 15 percent of freshmen at Berkeley identified as Hispanic, with the figure at the system’s nine campuses overall standing at 25 percent.

“Many students from underrepresented minority groups, particularly those at the U.C.’s most selective campuses, will often find themselves the sole student of their race in a class,” the brief said.

Olufemi Ogundele, dean of undergraduate admissions at Berkeley, said he was “incredibly proud” of the school’s progress in admissions despite the ban on considering race. But he added, “There’s no doubt in my mind that we would be making much more significant progress if we were able to consider the entire human or the entire student.”

At another selective school in the system, the University of California, San Diego, 3 percent of undergraduate students are Black, and some of them have complained about racist incidents.

While the brief focuses only on the University of California system, diversity at other four-year public colleges in California also has declined, according to yet another brief filed with the court by a group of California civil rights and legal organizations.

By 2018, the percentage of Black students enrolled at any California State University was half that in 1997, dropping to 4 percent from 8 percent, the brief said.

Native American students enrolled in any campus of California State University’s system fell to 0.2 percent in 2018 from 1.23 percent in 1995.