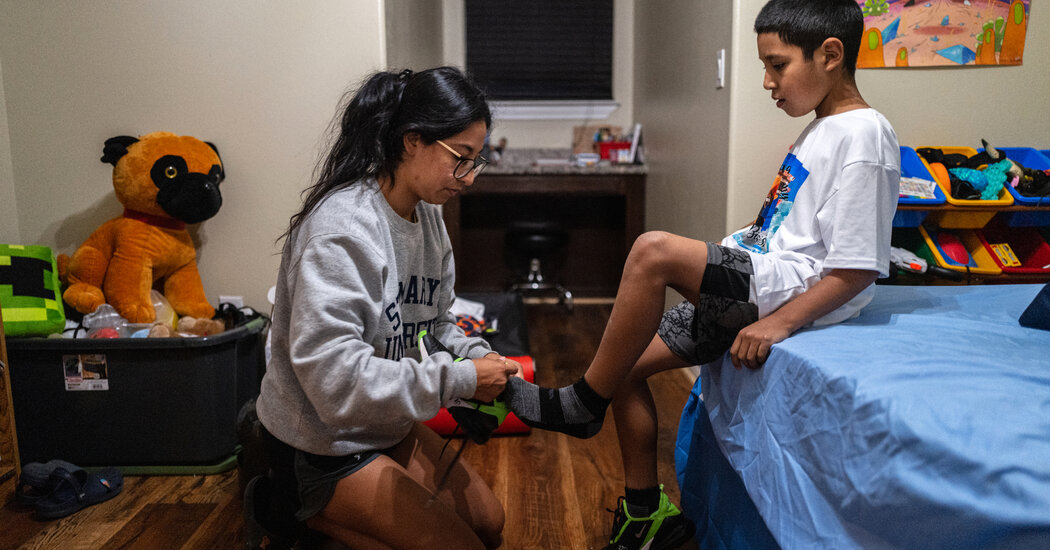 Classes resumed on Tuesday in the South Texas community where a mass shooting in May took the lives of 19 students and two teachers.

UVALDE, Texas — Kimberly Rubio’s four children had been quiet about the start of the school year in Uvalde until three days ago, when she heard them talking about back-to-school outfits. Missing from the nervous anticipation was her daughter Lexi Aniyah Rubio, one of 19 students and two teachers killed when a gunman stormed her fourth-grade classroom on the last day of school.

Lexi would have loved every minute of shopping for school supplies and planning what to wear, Ms. Rubio said. Three months after the May 24 shooting, Ms. Rubio still stumbles when she is asked how many children she is preparing for school.

“My mind just goes blank when people ask me things like that,” Ms. Rubio said. “Four kids,” she said finally.

After a summer that seemed not like summer at all — no swimming, no picnics at the park — families in Uvalde were sending their children back to school on Tuesday.

Robb Elementary, where a teenager armed with an AR-15-style rifle committed one of the worst school shootings in U.S. history, remains shuttered and is scheduled to be demolished.

Other schools have set up temporary classrooms to handle the students who would have gone to Robb, and school officials were working to significantly expand a security system that had catastrophically failed, allowing the gunman to enter the building past a low perimeter fence and two doors that were apparently unlocked.

Some local families are opting for home-schooling; others are sending their children to private schools. But many have said that a return to public school would be an important part of the healing process. For the Rubios’ blended family, that meant all the usual September preparations for Isaiah Rodriguez, 18, David Falcon III, 14, Jahleela Rubio, 11, and Julian Rubio, 8.

“I think they need that,” Ms. Rubio said. “The summer has been kind of hectic.”

The Rubios planned to spend the first day of school doing yard work to distract themselves after dropping off the children. “We are going to try to keep our mind occupied, hope it goes smoothly,” Ms. Rubio said. “You can prepare all you want, but I just don’t think that everyone is actually prepared.”

Schools in Uvalde were closed to all outsiders for the opening day. Television news crews were set up outside, filming staff members as they greeted parents dropping off children at the newly fortified campuses. Nervous parents peered through the new eight-foot fences.

School district officials have said they would not discuss the return to school beyond issuing a written statement. “Creating routines and structure can profoundly impact our ability to heal from loss and process grief,” the statement said. “As our community continues to recover from the tragedy we experienced, our priority is ensuring that our students, families, and staff can return to teaching, learning, and essential school activities without disruption.”

Many parents said they remained skeptical about the school district’s ability to keep students safe. A state legislative committee found that the district had been poorly prepared for a mass shooting. Internal and external doors were often left unlocked, contrary to school protocols, and the gunman was able to easily climb over a five-foot exterior fence, the legislative report found.

The committee also found “systemic failures and egregiously poor decision making” on the part of the police officers who waited more than an hour to confront the gunman. The school police chief, Pete Arredondo, who was considered the acting incident commander under the school district’s protocols, was fired last month, a step that drew cheers and applause from grieving parents.

School administrators said they delayed the start of the school year from mid-August in order to have enough time to add additional security measures.

Teachers have been provided with specialized training, and five state police officers will be deployed at each campus, along with extra staff to make sure that all doors remain locked.

Ms. Rubio said that when she met with the superintendent, Hal Harrell, she asked the district to consider adding at least two new people to monitor surveillance cameras during the school day. “They will get back to me,” she said.

Still, some parents said they had opted for private schools for their children, including one operated by Sacred Heart Catholic Church, which began the new school year on Aug. 15 with double its previous enrollment. Other parents have said their children were fearful of going to school at all, and have enrolled them in virtual classes.

Gladys Castillon said her 10-year-old daughter, Kaitlyn, who was a fourth grader at Robb Elementary on the day of the shooting, still wakes up in tears and is afraid to leave the house. She and her classmates turned off the lights and hid in a classroom near where the gunman was shooting until they were evacuated.

Therapy has not helped Kaitlyn, Ms. Castillon said. “She said that every time she talks about that subject, she feels like her heart is going to explode,” she said. “I will give her the time she needs until she is ready.”

Ms. Rubio said she understood that not every family was ready for the new school year. Her family keeps pushing forward, she said, by remembering that school was so important to Lexi. Her daughter was only in fourth grade, she said, but already had a life plan: earning a softball scholarship to attend St. Mary’s University, where she planned to major in math and then attend law school.

After the shooting, the Rubios testified before Congress to plead for stricter gun laws, including raising to 21 the minimum age to buy semi-automatic rifles. More recently, they joined an organization of grieving family members known as Uvalde Strong for Gun Safety, which is pressing elected officials in Texas to enact stronger gun control and school safety measures.

A few weeks ago, the Rubios moved to a spacious four-bedroom, two-story house to be closer to their children’s school. Their former home carried too many painful memories, especially for Jahleela, who had shared a room with Lexi. In the days following the shooting, Jahleela had tried rooming with her 14-year-old brother, “but that didn’t go well,” Ms. Rubio said with a smile.

“It was difficult for everybody,” she said.

Lexi’s spirit is never too far away. A shrine near the front door features a large portrait of her, a wooden crucifix with her name on it, and a box containing flowers and a rosary from her funeral, with an inscription: “God will hold your hand until I see you there.”

At home on the day before school started, Ms. Rubio pointed to an image of Lexi that was added to a family portrait taken after her death. It looks as if all eight of them — the parents, three boys and three girls — were captured at the same time, sharing a happy family moment at a state park. They had been saving up earlier this year to have a professional photo taken, but “we ran out of time,” Ms. Rubio said.

The Rubios joined other parents of the victims for a quiet gathering that evening at Uvalde Plaza, which has become a grieving sanctuary since the shooting. Some of the parents no longer had children to send to school, and the start of the new school year promised to be a difficult one. They formed a circle, held each other’s hands, and prayed.

The next day, the children in the Rubio household rose before 6:30 a.m. David, Jahleela and an older sister, Kalisa Barboza, 18, yawned and rubbed their eyes, slumping on the puffy couch in the living room. They perked up when Ms. Rubio’s husband, Felix, arrived with breakfast from McDonald’s.

Julian, the youngest, joined his siblings at the kitchen table and stared at his food. “Eat, Julian,” Ms. Rubio coaxed him at first, and then gave up. “If you are done, you are done,” she said. “Go upstairs and wash your hands.”

Julian did not move. “You want me to go with you?” his mother asked. The boy nodded, hugging a stuffed animal.

After 7 a.m., Ms. Rubio rallied her troops, and Kalisa assembled them for a photo — all wearing matching T-shirts with images of their missing sister.

A few minutes later, Ms. Rubio and her husband dropped off Jahleela and Julian at their elementary school, where long lines of cars snaked down the block. Some children nervously waved goodbye to parents, as armed police officers paced back and forth.

Then it was David’s turn. The Rubios drove him to the front of the buzzing entrance to the high school. He grabbed his black Michael Jordan backpack and hopped out of the car.

Have a good day at school, his parents told him.

How Some Parents Changed Their Politics in the Pandemic

KGF Chapter 2: ‘Promise will be fulfilled,’ makers to announce release date of Yash,...