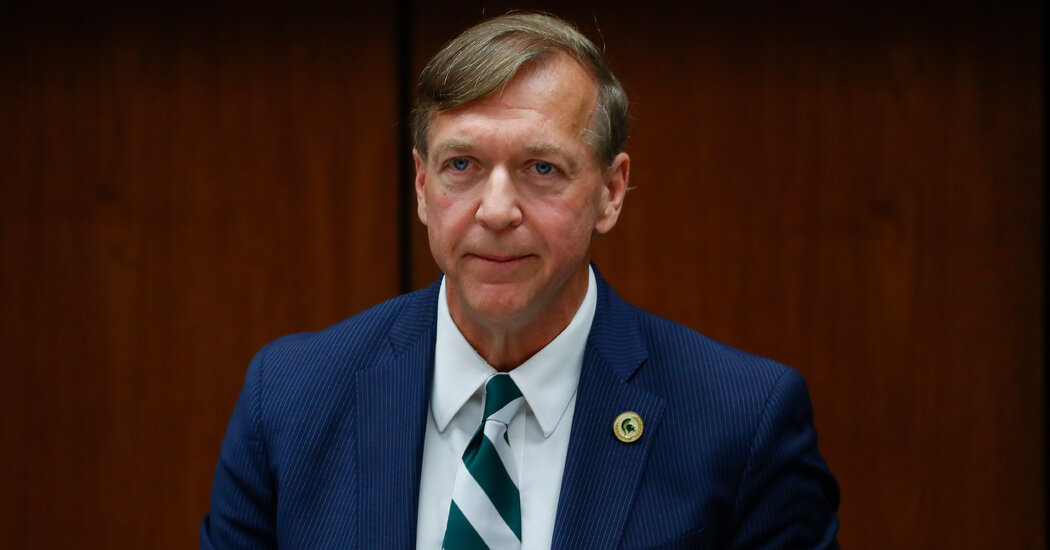 Samuel Stanley Jr. is the third president to resign since 2018. He had been under fire for his handling of a Title IX case involving the dean of the business school.

After pressure from the board of trustees, the president of Michigan State University announced his resignation on Thursday, the third president in four years to leave the university prematurely.

The decision caps a campaign by several board members, who had called on Dr. Samuel Stanley Jr. to retire within a year, angered over his handling of Title IX reports and the dismissal of a business school dean who had been accused of failing to report an incident of sexual misconduct.

In a video message to the university community on Thursday, Dr. Stanley said that he had “lost confidence” in the board of trustees and could not continue to serve it.

His resignation is sure to be contentious. On Tuesday, the faculty senate approved a no-confidence vote, by 55-4, in the board of trustees.

“The actions of the campus over the past month have shown the world that Michigan State University will not accept micromanagement by board members of the operations of this great institution,” Dr. Stanley said.

Board members did not respond immediately to a request for comment. But in September, Pat O’Keefe, a board member and businessman, told The Detroit News, that the board was just doing its job.

“It is vitally incumbent upon each and every one of us to operate from a foundation of honesty, integrity and transparency — and raise questions, concerns and, where and when necessary, take action when we feel these tenets are not adhered to,” Mr. O’Keefe said.

Some members of the eight-member board, which is elected by voters, disagreed about the seriousness of the accusations. The turnover in leadership, they said, could further destabilize the university, which is still trying to recover from the revelation that Lawrence G. Nassar, the doctor for both the university and U.S.A. Gymnastics, had abused young female athletes for decades. The scandal led to Mr. Nassar’s conviction, the university’s multimillion-dollar settlement with victims and the ouster of two presidents.

The Nassar case has also played a role in the tensions between Dr. Stanley and the board members.

Because of the Nassar controversy, the Michigan State Legislature requires the president and a board member of every public university to review all Title IX reports involving accusations of sexual misconduct of a university employee and submit a certification to certain divisions of the State Legislature and the state budget director. If a university fails to submit its certification, it risks losing 10 percent of its state funding for annual operations.

The provision was designed as an accountability measure to ensure that university leadership is aware of sexual misconduct cases within its institution, said Elizabeth Abdnour, a lawyer based in Lansing, Mich., who specializes in Title IX cases and worked as a Title IX investigator at Michigan State during the Nassar investigation.

“The impetus was that if there are serial predators, we catch them sooner, and they don’t just wreak havoc for years and the administration, the folks at the top, can say they didn’t know about it,” she said.

At Michigan State, some board members believe that the review system for Title IX reports had not been followed properly. One board member, Pat O’Keefe, told The Detroit News in mid-September that the university “may have filed a false and misleading Title IX compliance certificate,” signed by Dr. Stanley.

Dr. Stanley pushed back against that accusation, telling faculty during a meeting on Sept. 13 that he had “faithfully complied with this Michigan certification process the last two years and reviewed all of the Title IX reports that were required.”

In June, he added, he was notified that “some of our board members may not have actually complied with their part of their state requirement in 2021.”

Dr. Stanley’s certification had been under investigation by a law firm hired by the board of trustees. The investigation found procedural issues and Dr. Stanley recertified the results, the board said in a statement issued two weeks ago.

“It seems like a red herring to me,” Ms. Abdnour, the Lansing lawyer, said of the board’s concerns surrounding the certification process. If there were issues regarding the signature process, she said, it would make more sense to raise concerns privately than to start an investigation.

Dr. Stanley has also been criticized for the way he has handled the departure of Sanjay Gupta, the dean of Michigan State’s Broad College of Business, who resigned in August following concerns that he had not followed university guidelines related to the reporting of sexual misconduct.

Teresa Woodruff, the university provost, said during the Sept. 13 meeting that Mr. Gupta had “failed in his mandatory reporting responsibility” and “failed to act in a timely and reasonable manner to protect students and uphold our values.”

Nancy Temple, a lawyer representing Mr. Gupta, said that he was “fully participating” in the university’s investigation into the matter and had no further comment.

Not all board members were in agreement with the decision to push Dr. Stanley toward early retirement. In a statement last month, Dianne Byrum, chairwoman of the board, criticized other members for creating “confusion over the future of our university’s president” and called on them to “apologize” and “reverse course.”

“I take strong exception to the conduct by several MSU Board of Trustees who have sought to undermine and second guess President Stanley under the mistaken belief they are somehow better qualified to run the university,” Ms. Byrum wrote.

Ms. Byrum praised Dr. Stanley’s steering of the university through the Covid-19 pandemic and said he “should be allowed to complete his service to MSU without undo interference by the board.”

In a statement on Dr. Stanley’s second annual performance evaluation last October, Ms. Byrum noted that he had “met or exceeded his performance goals.”

Dr. Stanley took the helm of Michigan State in August 2019, after serving as president of Stony Brook University on Long Island in New York. By then, Michigan State had cycled through two presidents because of the Nassar scandal.

In 2018, Mr. Nassar was sentenced to what amounts to life in prison for multiple sex crimes involving girls and women. The day of Mr. Nassar’s sentencing, Michigan State’s president, Lou Anna K. Simon, resigned under pressure of her handling of the case. Months later, Michigan State agreed to a $500 million settlement for Mr. Nassar’s victims.

Ms. Simon was replaced by an interim president, John Engler, a former Republican governor of Michigan, who himself resigned the following year after he said that some of the women abused by Mr. Nassar’ seemed to be enjoying “the spotlight.”

Saweetie FAR & AWAY One Of The Most BEAUTIFUL At BET Awards, Chloe Bailey...

The Week in Business: Shoppers Open Their Wallets