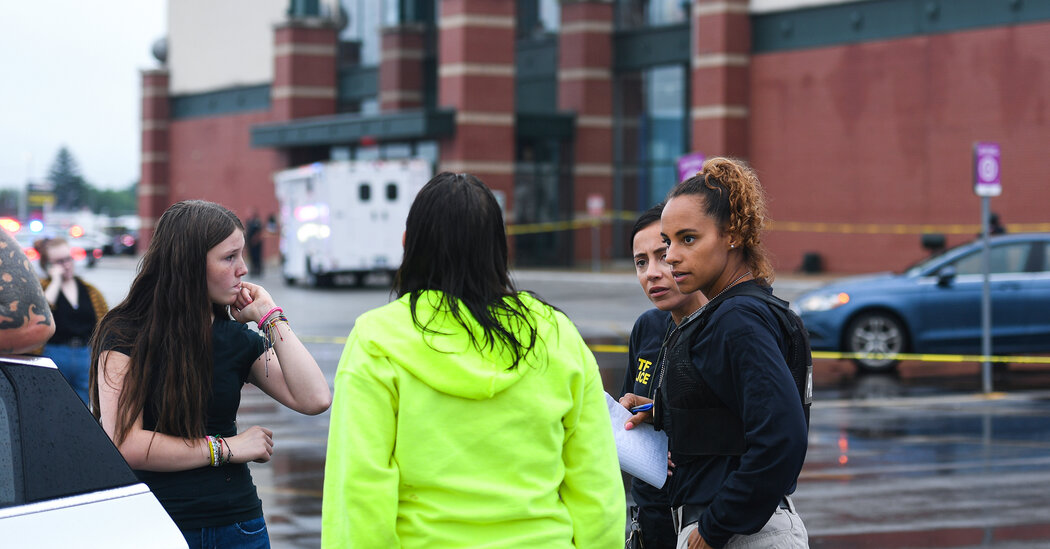 When a bystander fatally shot an assailant at an Indiana mall, the country again debated the wisdom of easier access to guns.

It was an act of pluck and composure worthy of a scene in the movies. But this was real life: A heavily armed man emerged from the bathroom in a Greenwood, Ind., shopping mall on Sunday evening and began shooting — until he was killed by an armed bystander.

Mike Wright, manager of the Luca Pizza di Roma in the mall’s food court, remembers taking shelter when the firing started and then emerging when it stopped to see the bystander behind a low-slung wall with his handgun trained on the assailant he had shot to death.

“He stood there maybe 25 or 30 feet from the body and held that pistol pointed at him until law enforcement arrived,” Mr. Wright remembered on Tuesday. “The good Samaritan guy seemed poised and under control. He appeared to be very disciplined.” Jim Ison, the local police chief, went further, saying that his engagement with the gunman, who had killed three people, was “nothing short of heroic.”

But along with the horror, drama and acclaim came a roaring and rekindled controversy in a country united in revulsion over its ceaseless plague of gun violence, yet bitterly divided over a loosening of gun restrictions like the Indiana law, passed this year, that allowed the bystander, Elisjsha Dicken, 22, to carry his 9-millimeter handgun in the first place.

Proponents of expanded gun rights were quick to praise Mr. Dicken’s actions. “We will say it again: The only way to stop a bad guy with a gun is a good guy with a gun,” the National Rifle Association wrote in a tweet on Monday morning.

But Mr. Dicken’s act, though heroic, was also a statistical unicorn. An examination of 433 active shooter attacks in the United States between 2000 and 2021 showed that only 22 ended with a bystander shooting an attacker, according to data from the Advanced Law Enforcement Rapid Response Training Center at Texas State University. In 10 of those cases, the armed bystander was a security guard or off-duty law enforcement officer. In other encounters, civilians attempting to step in and stop an assailant were themselves shot to death by the police.

“It is exceedingly rare, the exception rather than the rule,” Adam Skaggs, chief counsel and policy director at the Giffords Law Center to Prevent Gun Violence, said of scenarios like the one in Indiana. “The reality is that more people carrying guns means more conflicts escalating into deadly violence and more people being shot and killed.”

The police identified the assailant at the Greenwood Park Mall as 20-year-old Jonathan Douglas Sapirman but have not indicated a motive. But Mr. Dicken’s intervention almost certainly saved lives: The police said that Mr. Sapirman, who had fired off 24 rounds, had come with more than 100 rounds of ammunition, two rifles and a pistol. Mr. Dicken killed the gunman 15 seconds after the shooting began, Chief Ison said on Tuesday, amending an earlier statement.

The attack was bracketed by other mass violence that underscored the Groundhog Day nightmare from which the United States seems unable to awaken. Hours after the shooting at the mall, four people were shot, one of them fatally, at an unrelated vigil in a park nine miles north of Greenwood.

The same day, a special Texas House committee released a 77-page report criticizing the police response to a gunman’s May 24 massacre at an elementary school in Uvalde, Texas, in which nearly 400 law enforcement officers waited to confront him as 19 children and two teachers died.

The Texas State University data suggests that mass shootings in the United States are on the rise. At the same time, the Indiana legislation is part of a concerted push by conservative state lawmakers to make it easier to carry weapons. Indiana is one of 25 states that have passed so-called constitutional carry laws that allow people to carry a concealed firearm without a permit.

Last month, the U.S. Supreme Court struck down a New York law that had placed strict limits on carrying guns outside the home.

In Indiana, the constitutional carry law was opposed by the state police superintendent and a number of other law enforcement groups.

“The point I would make about the new permit-less law is that if I am a regular law-abiding citizen and 21 or older, I can go to a gun store and buy a handgun, walk out and carry the firearm wherever I go without any training or knowledge of how to use the gun safely and legally,” Mr. Skaggs said.

Chief Ison said the police found no indication that Mr. Dicken had a permit for the handgun. But the chief said he was carrying it legally under the new law. In a brief interview, Mr. Dicken’s lawyer, Guy A. Relford, described his client as an “all-American Indiana boy,” and declined to provide any specific information about him or the mall encounter.

Paul Helmke, a professor at Indiana University’s O’Neill School of Public and Environmental Affairs and a former president and chief executive of the Brady Campaign to Prevent Gun Violence, said Mr. Dicken’s actions meant that the mall shooting “ended up better than it could’ve been.”

But he said that active shooter situations tended to be too chaotic — and too prone to unexpected tragedy — to rely on the intervention of armed bystanders, who can sometimes get in the way of an effective law enforcement response, making it difficult for police officers to differentiate between an assailant and a well-intentioned armed civilian.

“You have to make a split-second decision, and one of the problems with armed citizens is that when the police respond, or when another bystander responds, they’re not always going to know who the right person is,” he said.

That was the case in Arvada, Colo., when, in June 2021, a bystander named Johnny Hurley was shot and killed by a police officer after Mr. Hurley had used his handgun to shoot another man who had killed a police officer.

In November 2018, a Chicago security guard named Jemel Roberson detained a gunman outside of the bar where he worked, pointing his gun at the man’s back. Mr. Roberson was shot and killed by a responding officer.

That same month, an armed man named Emantic F. Bradford was shot and killed by a police officer in an Alabama shopping mall. A lawsuit filed by Mr. Bradford’s mother asserts that he had pulled out the handgun he had been lawfully carrying as part of his “good Samaritan” response to a chaotic scene at the mall after a shooting erupted.

In a discussion about the Indiana shooting on Fox News, Brandon Tatum, a conservative commentator and former police officer, echoed the N.R.A.’s position that armed bystanders could make an important contribution to peacekeeping. “I think good gun owners, or at least legal gun owners, are the recipe for success against people who do not want to follow the law,” Mr. Tatum said.

This week in The Federalist, a conservative website, the senior editor David Harsanyi noted a number of recent incidents in which armed people were able to stop people with bad intentions from committing acts of violence. Among other things, Mr. Harsanyi argued that the data from the Texas State researchers was misleading.

“It is impossible, unless one is a mind-reader, to quantify how often the presence of good guys with guns dissuades murders,” he wrote. “It is likely that shooters, suicidal or not, prefer soft targets that allow them to make the most gruesome impact, which is one reason I simply can’t understand why we wouldn’t want to train (willing) teachers to use firearms.”

But Adam Winkler, an expert on gun policy at the University of California, Los Angeles, School of Law, noted that there are 400 million guns in the United States, and yet the nation has one of the worst gun death records. “If more guns led to less crime, America would be the safest country in the world,” he said.

Most states that require a permit to carry a gun do not require active shooter response training, he noted — and in the roughly two dozen states that have eliminated permitting requirements, no training is required at all.

“If we really thought that good guys with guns were the answer, then we would require the good guys to go through extensive training, so that if they engage a mass shooting, we can depend on them to do it right,” he said.

But as states and the Supreme Court dismantle gun control laws, he worries there is little hope for other alternatives.

Even if reliance on a good guy with a gun “is not a good strategy for reducing gun violence or protecting people from mass shooters,” he said, “it may be the only thing we have left.”

Kangana Ranaut to play a Sikh soldier in Tejas