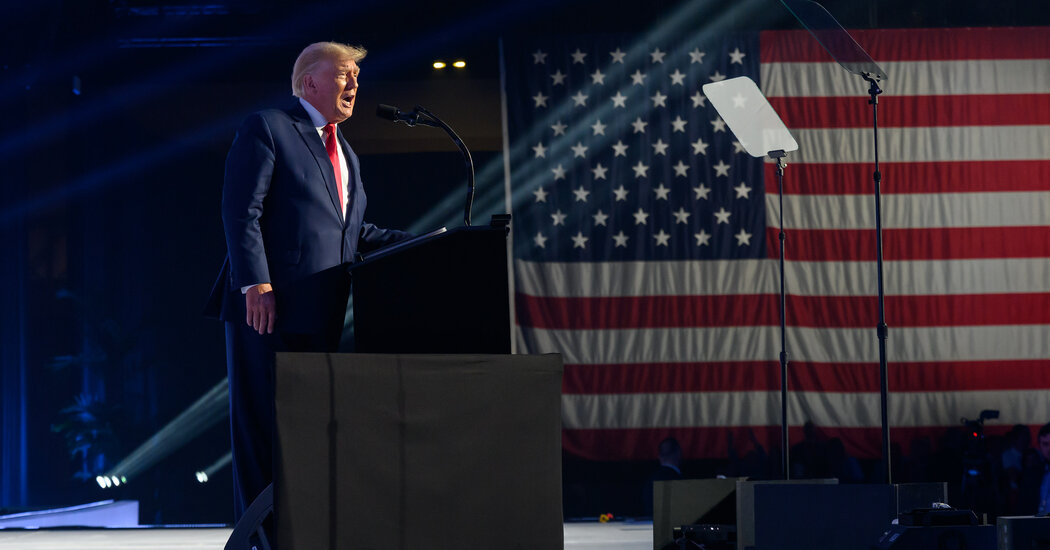 On the morning of July 8, former President Donald J. Trump took to Truth Social, a social media platform he founded with people close to him, to claim that he had in fact won the 2020 presidential vote in Wisconsin, despite all evidence to the contrary.

Barely 8,000 people shared that missive on Truth Social, a far cry from the hundreds of thousands of responses his posts on Facebook and Twitter had regularly generated before those services suspended his megaphones after the deadly riot on Capitol Hill on Jan. 6, 2021.

And yet Mr. Trump’s baseless claim pulsed through the public consciousness anyway. It jumped from his app to other social media platforms — not to mention podcasts, talk radio or television.

Within 48 hours of Mr. Trump’s post, more than one million people saw his claim on at least dozen other sites. It appeared on Facebook and Twitter, from which he has been banished, but also YouTube, Gab, Parler and Telegram, according to an analysis by The New York Times.

The spread of Mr. Trump’s claim illustrates how, ahead of this year’s midterm elections, disinformation has metastasized since experts began raising alarms about the threat. Despite years of efforts by the media, by academics and even by social media companies themselves to address the problem, it is arguably more pervasive and widespread today.

“I think the problem is worse than it’s ever been, frankly,” said Nina Jankowicz, an expert on disinformation who briefly led an advisory board within the Department of Homeland Security dedicated to combating misinformation. The creation of the panel set off a furor, prompting her to resign and the group to be dismantled.

Not long ago, the fight against disinformation focused on the major social media platforms, like Facebook and Twitter. When pressed, they often removed troubling content, including misinformation and intentional disinformation about the Covid-19 pandemic.

Today, however, there are dozens of new platforms, including some that pride themselves on not moderating — censoring, as they put it — untrue statements in the name of free speech.

Other figures followed Mr. Trump in migrating to these new platforms after being “censored” by Facebook, YouTube or Twitter. They included Michael Flynn, the retired general who served briefly as Mr. Trump’s first national security adviser; L. Lin Wood, a pro-Trump lawyer; Naomi Wolf, a feminist author and vaccine skeptic; and assorted adherents of QAnon and the Oath Keepers, the far-right militia.

At least 69 million people have joined platforms, like Parler, Gab, Truth Social, Gettr and Rumble, that advertise themselves as conservative alternatives to Big Tech, according to statements by the companies. Though many of those users are ostracized from larger platforms, they continue to spread their views, which often appear in screen shots posted on the sites that barred them.

“Nothing on the internet exists in a silo,” said Jared Holt, a senior manager on hate and extremism research at the Institute for Strategic Dialogue. “Whatever happens in alt platforms like Gab or Telegram or Truth makes its way back to Facebook and Twitter and others.”

The diffusion of the people who spread disinformation has radicalized political discourse, said Nora Benavidez, senior counsel at Free Press, an advocacy group for digital rights and accountability.

“Our language and our ecosystems are becoming more caustic online,” she said.

The shifts in the disinformation landscape are becoming clear with the new cycle of American elections. In 2016, Russia’s covert campaign to spread false and divisive posts seemed like an aberration in the American political system. Today disinformation, from enemies, foreign and domestic, has become a feature of it.

The baseless idea that President Biden was not legitimately elected has gone mainstream among Republican Party members, driving state and county officials to impose new restrictions on casting ballots, often based on mere conspiracy theories percolating in right-wing media.

Voters must now sift through not only an ever-growing torrent of lies and falsehoods about candidates and their policies, but also information on when and where to vote. Officials appointed or elected in the name of fighting voter fraud have put themselves in the position to refuse to certify outcomes that are not to their liking.

The purveyors of disinformation have also become increasingly sophisticated at sidestepping the major platforms’ rules, while the use of video to spread false claims on YouTube, TikTok and Instagram has made them harder for automated systems to track than text.

TikTok, which is owned by the Chinese tech giant ByteDance, has become a primary battleground in today’s fight against disinformation. A report last month by NewsGuard, an organization that tracks the problem online, showed that nearly 20 percent of videos presented as search results on TikTok contained false or misleading information on topics such as school shootings and Russia’s war in Ukraine.

“People who do this know how to exploit the loopholes,” said Katie Harbath, a former director of public policy at Facebook who now leads Anchor Change, a strategic consultancy.

With the midterm elections only weeks away, the major platforms have all pledged to block, label or marginalize anything that violates company policies, including disinformation, hate speech or calls to violence.

Still, the cottage industry of experts dedicated to countering disinformation — think tanks, universities and nongovernment organizations — say the industry is not doing enough. The Stern Center for Business and Human Rights at New York University warned last month, for example, that the major platforms continued to amplify “election denialism” in ways that undermined trust in the democratic system.

Another challenge is the proliferation of alternative platforms for those falsehoods and even more extreme views.

Many of those new platforms have flourished in the wake of Mr. Trump’s defeat in 2020, though they have not yet reached the size or reach of Facebook and Twitter. They portray Big Tech as beholden to the government, the deep state or the liberal elite.

Parler, a social network founded in 2018, was one of the fastest-growing sites — until Apple’s and Google’s app stores kicked it off after the deadly riot on Jan. 6, which was fueled by disinformation and calls for violence online. It has since returned to both stores and begun to rebuild its audience by appealing to those who feel their voices have been silenced.

“We believe at Parler that it is up to the individual to decide what he or she thinks is the truth,” Amy Peikoff, the platform’s chief policy officer, said in an interview.

She argued that the problem with disinformation or conspiracy theories stemmed from the algorithms that platforms use to keep people glued online — not from the unfettered debate that sites like Parler foster.

On Monday, Parler announced that Kanye West had agreed in principle to purchase the platform, a deal that the rapper and fashion designer, now known as Ye, cast in political terms.

“In a world where conservative opinions are considered to be controversial, we have to make sure we have the right to freely express ourselves,” he said, according to the company’s statement.

Parler’s competitors now are BitChute, Gab, Gettr, Rumble, Telegram and Truth Social, with each offering itself as sanctuary from the moderating policies of the major platforms on everything from politics to health policy.

A new survey by the Pew Research Center found that 15 percent of prominent accounts on those seven platforms had previously been banished from others like Twitter and Facebook.

Nearly two-thirds of the users of those platforms said they had found a community of people who share their views, according to the survey. A majority are Republicans or lean Republican.

A result of this atomization of social media sources is to reinforce the partisan information bubbles within which millions of Americans live.

At least 6 percent of Americans now regularly get news from at least one of these relatively new sites, which often “highlight non-mainstream world views and sometimes offensive language,” according to Pew. One in 10 posts on these platforms that mentioned L.G.B.T.Q. issues involved derisive allegations, the survey found.

These new sites are still marginal compared with the bigger platforms; Mr. Trump, for example, has four million followers on Truth Social, compared with 88 million when Twitter kicked him off in 2021.

Even so, Mr. Trump has increasingly resumed posting with the vigor he once showed on Twitter. The F.B.I. raid on Mar-a-Lago thrust his latest pronouncements into the eye of the political storm once again.

For the major platforms, the financial incentive to attract users — and their clicks — remains powerful and could undo the steps they took in 2021. There is also an ideological component. The emotionally laced appeal to individual liberty in part drove Elon Musk’s bid to buy Twitter, which appears to have been revived after months of legal maneuvering.

Nick Clegg, the president of global affairs at Meta, Facebook’s parent company, even suggested recently that the platform might reinstate Mr. Trump’s account in 2023 — ahead of what could be another presidential run. Facebook had previously said it would do so only “if the risk to public safety has receded.”

A study of Truth Social by Media Matters for America, a left-leaning media monitoring group, examined how the platform had become a home for some of the most fringe conspiracy theories. Mr. Trump, who began posting on the platform in April, has increasingly amplified content from QAnon, the online conspiracy theory.

He has shared posts from QAnon accounts more than 130 times. QAnon believers promote a vast and complex falsehood that centers on Mr. Trump as a leader battling a cabal of Democratic Party pedophiles. Echoes of such views reverberated through Republican election campaigns across the country during this year’s primaries.

Ms. Jankowicz, the disinformation expert, said the nation’s social and political divisions had churned the waves of disinformation.

The controversies over how best to respond to the Covid-19 pandemic deepened distrust of government and medical experts, especially among conservatives. Mr. Trump’s refusal to accept the outcome of the 2020 election led to, but did not end with, the Capitol Hill violence.

“They should have brought us together,” Ms. Jankowicz said, referring to the pandemic and the riots. “I thought perhaps they could be kind of this convening power, but they were not.”