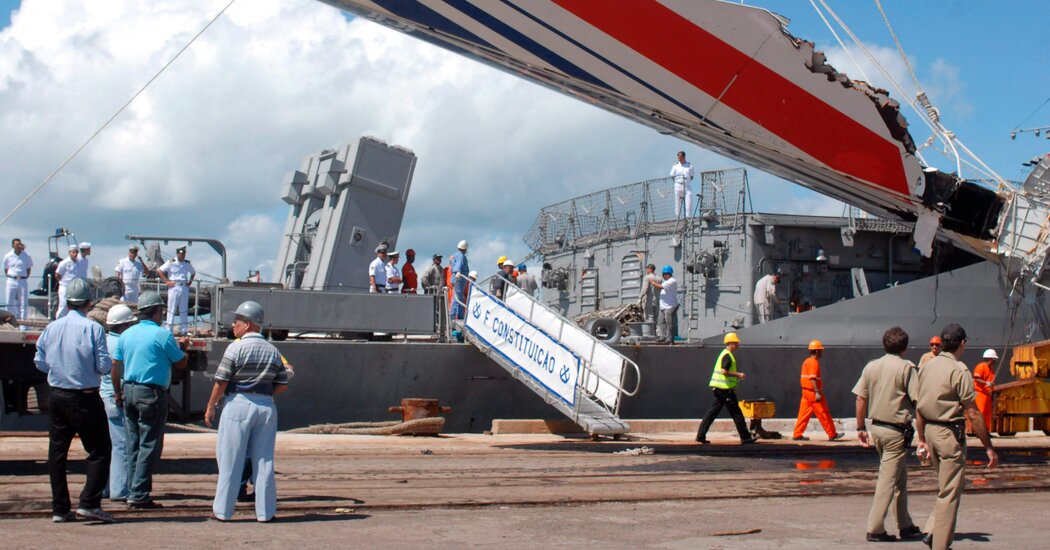 Families of the 228 victims fought for years to bring the companies to court. Both face manslaughter charges.

PARIS — Airbus and Air France went on trial on Monday over their role in the 2009 crash of a Rio de Janeiro-Paris flight that plunged into the Atlantic Ocean, killing all 228 people on board, a hard-won step in a decade-long struggle by the families of victims to bring the two aviation giants to court.

Prosecutors have charged Airbus, the aircraft manufacturer, and Air France, the main French airline, with involuntary manslaughter. But the legal pursuit has been slow and marked by years of repeated denials from the companies that they were criminally responsible for the accident, the deadliest in the airline’s history.

Philippe Linguet, 59, who is one of 400 plaintiffs and whose brother Pascal died in the crash, said at the main courthouse in Paris, where the trial is being held, that the mere fact that the two companies were standing trial was a “great victory” after “years of ups and downs.”

If convicted, the companies would each face a fine of 225,000 euros, or about $218,300, a figure that would do little to dent their bottom lines, but a guilty verdict against them could seriously hurt the reputation of both aviation heavyweights. Families of the victims have already received financial compensation.

Both expressed their condolences for the crash, which investigators said occurred after confused pilots responded inadequately to iced-over airspeed sensors, but both also said their companies were not guilty.

“Air France doesn’t forget and will never forget,” Ms. Rigail told the court, but she insisted that the airline had not made any criminal mistakes. Mr. Faury said that “security is my number one priority,” but he also repeated Airbus’s stance that it was not criminally liable for the crash.

“I wanted to be here first to express my deepest sympathy and consideration for the families and loved ones of the victims,” Mr. Faury told the court, before Mr. Linguet, the vice-president of Entraide et Solidarité AF447, an association of families of the victims, heckled him from the back of the courtroom, yelling “Shame on you!”

The plane crashed on June 1, 2009, when Air France Flight 447, an Airbus A330, was caught in an overnight thunderstorm several hours after leaving Rio de Janeiro for Paris. Ice crystals threw off the plane’s airspeed sensors and its autopilot disconnected.

Investigators later determined that the flight’s bewildered pilots had faced a barrage of alarms and conflicting data from instruments in the cockpit. In a period that did not even last five minutes, they struggled to regain control of the plane as it stalled, went into a free fall, and slammed into the ocean between Brazil and West Africa.

None of the 216 passengers and 12 crew members survived. The victims included dancers, doctors, engineers and executives from nations throughout Europe as well as from Africa, Asia, Canada, South America and the United States. Some were on business trips, others were on vacation. Many were parents, and eight were children.

A procession of experts is scheduled to testify at the trial, which is expected to delve deeply into the intricacies of flight safety, airplane piloting and aviation regulations over the course of two months. But families of the victims, who bristle at any suggestion that the pilots were the only ones responsible for the crash, want the trial to show the crash’s human toll as well.

“It is a trial that is going to be very technical,” said Mr. Linguet. “When the lawyers start to quibble, when the experts start using words that we don’t understand, we have to put humanity back at the center,” he added.

Air France is accused of insufficiently training its pilots on how to react when the sensor malfunctioned. Prosecutors say Airbus underestimated the threat to safety in the event of failure by the sensors, known as Pitot tubes — small cylinders that sit outside the body of the plane to calculate airspeed.

The sensors had proved faulty because of icing in incidents that occurred on other flights before the crash, and Airbus is accused of failing to urgently inform airlines and their crews about the problem. The sensors were replaced on Airbus planes worldwide after the accident.

Black boxes from the crash were only recovered two years later on the ocean floor, at a depth of over 10,000 feet.

“The court’s objective, as is that of all the plaintiffs, is to understand what happened above the Atlantic that night,” Sylvie Daunis, the presiding judge, said on Monday.

In 2019, after years of tortuous investigations and dueling expert reports, magistrates in France who were handling the inquiry attributed the crash mainly to pilot error and decided to dismiss the case. But prosecutors, plaintiffs and pilot unions appealed, and a French court overruled the decision in 2021, ordering Airbus and Air France to stand trial.

Air France pilots have come under scrutiny over a series of incidents in recent months — including a cockpit fistfight between two pilots — that have raised concerns over safety protocols on flights operated by the French flagship carrier. In August, aviation investigators reprimanded the airline over a lack of rigor in following safety procedures.

What Remote Work Debate? They’ve Been Back at the Office for a While.

Extreme Heat Will Change Us