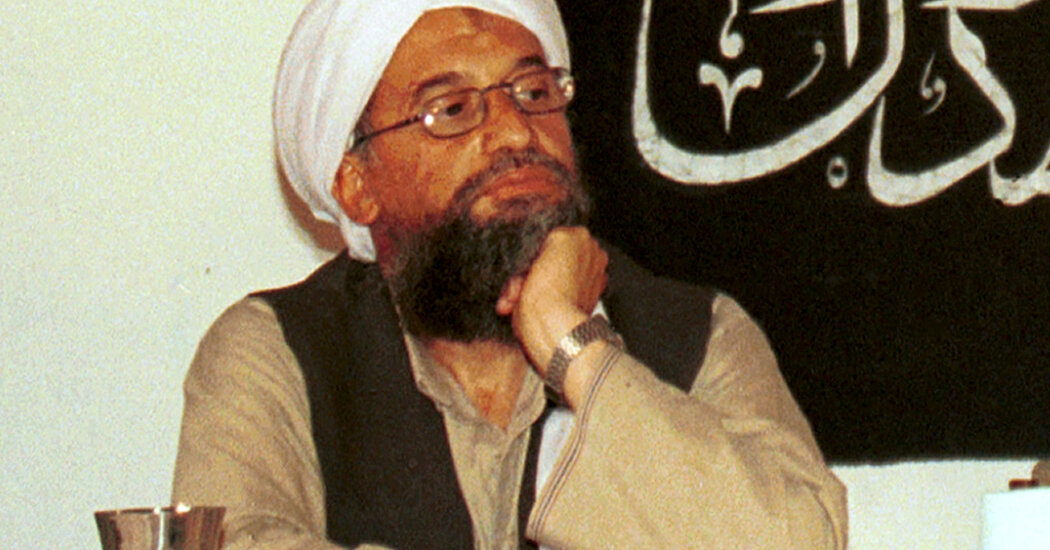 The terrorist network has lost eight of its top leaders in recent years. But it has more total fighters than it did on Sept. 11, 2001.

WASHINGTON — No terrorist group, not even the Islamic State, has had the notoriety and immediate name recognition of Al Qaeda.

But the killing of the group’s leader, Ayman al-Zawahri, in a C.I.A. drone strike early Sunday marks a pivotal inflection point for the global organization. Eight of its top leaders have been killed in the past three years, and it is unclear who will succeed al-Zawahri.

Yet Al Qaeda is in more countries and has more total fighters than it did on Sept. 11, 2001, when it attacked the United States. Some of its franchises that have sprung up since then, particularly in Somalia and the Sahel region of West Africa, are ascendant, seizing swaths of territory from weak governments and spending millions of dollars on new weapons, despite a decade’s effort to weaken and contain them.

None of these affiliates pose the same kind of threat to the American homeland that Al Qaeda did on Sept. 11. But they are deadly and resilient. The Qaeda affiliate in East Africa killed three Americans at a U.S. base in Kenya in 2020. A Saudi officer training in Florida killed three sailors and wounded eight other people in 2019. The officer acted on his own but was in contact with the Qaeda branch in Yemen as he completed his attack plans.

And as al-Zawahri’s presence in Kabul suggests, Al Qaeda and its leaders feel confident moving around Afghanistan, now that the Taliban are back in control of the country, counterterrorism officials said.

“The question isn’t what this does to Al Qaeda, but what does this do to the witches’ brew of terrorists in Afghanistan?” said Brian Katulis, the vice president for policy at the Middle East Institute.

Al Qaeda is not the only global terrorist network in transition. A risky predawn raid in northwest Syria in early February by U.S. Special Operations forces resulted in the death of the Islamic State’s overall leader, Abu Ibrahim al-Hashimi al-Qurayshi. ISIS fighters have reverted to a guerrilla war since the last remnant of its caliphate, or religious state, in Syria was seized by U.S.-backed Syrian Kurds in 2019.

But al-Zawahri’s death puts the focus back on Al Qaeda, which had largely been overshadowed by its upstart Islamic State rival, also known as ISIL, after Osama bin Laden’s death in 2011. Many terrorism analysts said Saif al-Adel, a senior Qaeda leader wanted by the F.B.I. in the bombings of two United States embassies in East Africa in 1998, was likely to succeed al-Zawahri. He is believed to be living in Iran.

“The international context is favorable to Al Qaeda, which intends to be recognized again as the leader of global jihad,” a U.N. report concluded in July. “Al Qaeda propaganda is now better developed to compete with ISIL as the key actor in inspiring the international threat environment, and it may ultimately become a greater source of directed threat.”

No country is under greater U.S. scrutiny for a comeback by Al Qaeda than Afghanistan. In announcing al-Zawahri’s death on Monday, President Biden said the strike would help ensure that Afghanistan could no longer “become a terrorist safe haven” or a “launching pad” for attacks against the United States.

But the withdrawal of U.S. forces from the country last August put pressure on the military and spy agencies to watch for a Qaeda resurgence with only limited informant networks on the ground and drones flying from the Persian Gulf on “over the horizon” surveillance missions.

This spring, another U.N. report cautioned that Al Qaeda had found “increased freedom of action” in Afghanistan since the Taliban seized power. The report noted that a number of Qaeda leaders were possibly living in Kabul and that an increase in public statements and videos by al-Zawahri suggested that he was able to lead more effectively and more openly after the Taliban took control.

But the intelligence shared by U.N. member nations in the July report indicated that Al Qaeda did not pose the same immediate threat as the Islamic State affiliate in Afghanistan.

“Al Qaeda is not viewed as posing an immediate international threat from its safe haven in Afghanistan because it lacks an external operational capability and does not currently wish to cause the Taliban international difficulty or embarrassment,” the U.N. report concluded.

Outside Afghanistan, Al Qaeda’s far-flung affiliates enjoyed local autonomy while adhering to al-Zawahri’s overall strategy. As a result, his death will most likely have little impact on the franchises’ day-to-day operations, counterterrorism specialists said.

The wealthiest and most lethal Qaeda affiliate today is Al Shabab, the franchise in Somalia and the rest of East Africa, military and counterterrorism officials said.

According to the most recent U.N. report, Al Shabab currently has 7,000 to 12,000 fighters and is spending approximately $24 million a year — a quarter of its budget — on weapons and explosives, and increasingly on drones.

And the threat is getting worse. “It is my judgment that due to a lack of effective governance and counterterrorism pressure, Al Shabab has only grown stronger and bolder over the past year,” Gen. Stephen J. Townsend, the head of the Pentagon’s Africa Command, told the Senate in March.

In the latest sign of trouble, almost 500 Shabab fighters crossed into eastern Ethiopia last month and clashed with Ethiopian forces along the border, General Townsend said.

In May, Mr. Biden signed an order authorizing the Pentagon to redeploy hundreds of Special Operations forces inside Somalia — largely reversing a decision by President Donald J. Trump to withdraw nearly all 700 ground troops who had been stationed there.

In addition, Mr. Biden approved a Pentagon request for standing authority to target about a dozen suspected leaders of Al Shabab. Since Mr. Biden took office, airstrikes in Somalia have largely been limited to those meant to defend partner forces facing an immediate threat.

Together, the decisions by Mr. Biden resurrected an open-ended American counterterrorism operation that amounted to a low-grade war through three administrations.

Military officials said the total number of U.S. troops having a “persistent presence” in Somalia would be capped at around 450. That will replace a system in which U.S. troops trained and advised Somali and African Union forces during short visits.

The Biden administration’s strategy in Somalia is to try to reduce the threat from Al Shabab by suppressing its ability to plot and carry out complicated operations, such as the attack on a U.S. air base at Manda Bay, Kenya, in January 2020 that killed three Americans.

In the Sahel, the vast arid region south of the Sahara, militants from both Al Qaeda and the Islamic State have been fighting local governments in countries like Mali and Burkina Faso for years.

Despite the arrival of French troops and a U.N. peacekeeping force, militants spread across Mali and then to neighboring nations. In Burkina Faso, to the south, nearly two million people have been displaced by the conflict.

Countries on the Gulf of Guinea, like Benin and Ivory Coast, have also suffered sporadic attacks as the violence seeps south. The Qaeda affiliate, known as JNIM, trains recruits in Burkina Faso before redeploying them “to their countries of origin,” the July U.N. report said.

The most serious terrorism concerns in Syria focus on the thousands of Islamic State fighters in the country’s northeast.

American counterterrorism officials have voiced alarm in recent years about a Qaeda affiliate in Syria, Hurras al-Din, that they say is plotting attacks against the West by exploiting the chaotic security situation in the country’s northwest and the protection inadvertently afforded by Russian air defenses shielding Syrian government forces.

But recent U.S. airstrikes, such as one in June in Idlib Province that the military said killed Abu Hamzah al Yemeni, one of the group’s senior leaders, have eased some of the worries.

For more than a decade, Al Qaeda’s affiliate in Yemen was one of the most dangerous terrorist organizations on the planet. The group spent years inventing explosives that were difficult to detect, including trying to disguise bombs in devices like cellphones. It has tried at least three times to blow up American airliners, without success.

But several of the group’s leaders have been killed in recent years, damaging its ability to orchestrate or carry out operations against the West, American and European counterterrorism specialists say.

Clashes with rival Islamic State and Houthi rebel fighters in Yemen have also weakened the group, whose full name is Al Qaeda in the Arabian Peninsula, or AQAP. Even though the group has been diminished, intelligence and counterterrorism officials warn that the organization remains dangerous.

Dance Deewane 3: Remo D’souza gets emotional as his health scare is portrayed on...

Shilpa Shetty: Don’t let my producer and actor sides interfere with each other