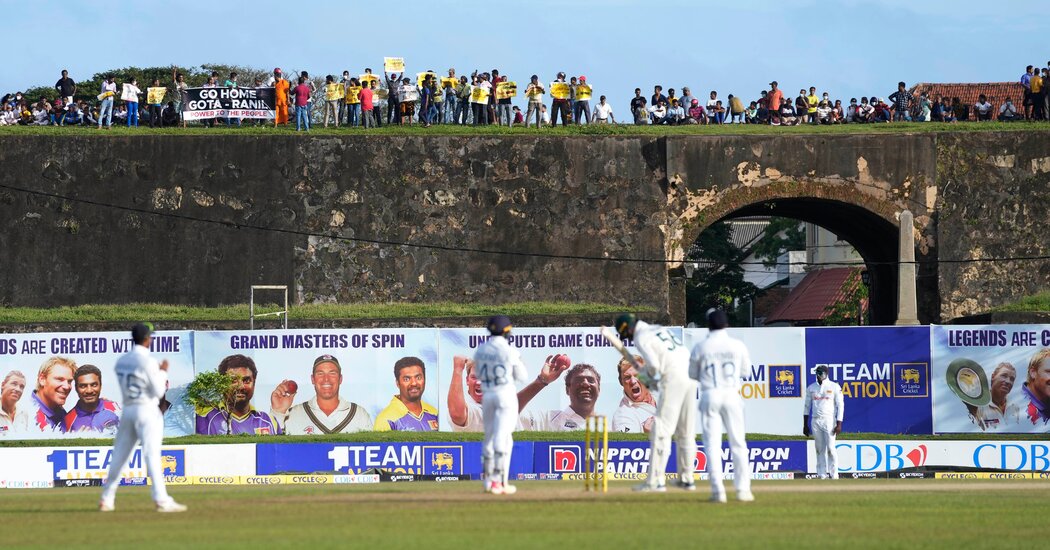 The success of the men’s national team has offered solace to the country, and one fan called the players “brand ambassadors during this time of hardship.”

As a political crisis and economic meltdown ravaged Sri Lanka, the computer science student Aadhil Siddhique was among the legions of people there who found relief in the simple pleasures of an old ritual: cricket.

When he wasn’t studying for exams or attending antigovernment protests, Mr. Siddhique, 24, made time in recent months to follow his favorite sport on television and online — at least when regular power cuts didn’t intervene. He was also in the stands recently when throbbing crowds cheered on the men’s national team in Colombo, the capital, and the southern city of Galle.

To his delight, the team has notched some big victories, a resurgence that he says began when they were at a low ebb about a year ago. In May, it had a commanding victory over Bangladesh in a five-day test, one of cricket’s three formats. And this month, on home turf, the team rebounded from a loss to thump Australia, the world’s top-ranked test squad.

That multiday match, held in Galle, was symbolic for another reason. On the second day, demonstrators surrounded the stadium while their compatriots in Colombo overran the president’s home, forcing him into hiding and, eventually, resigning.

The team’s players are “brand ambassadors during this time of hardship,” Mr. Siddhique said by phone, three days before the team was scheduled to host Pakistan on Sunday for the second of a two-test tour. “Whenever Sri Lanka wins, we feel motivated that this struggle against corrupt politicians could also be won.”

Cricket was introduced to South Asia by the British colonial authorities who ruled the region. It remains deeply popular there today in part because it is one of the few sports in which South Asian teams consistently excel on a global level, said Abhishek Mukherjee, a cricket writer who lives in the Indian city of Kolkata.

There is so much interest in the sport that professional matches have often gone ahead through severe crises, including for much of the coronavirus pandemic and Sri Lanka’s decades-long civil war. When the country’s men’s cricket team was attacked in a commando-style ambush during a trip to Pakistan in 2009, the disruption did not last long. The squad hosted the Pakistani team at home a few months later.

“Even when something goes really wrong, they will always try to find joy and happiness in sport,” Mr. Mukherjee said, referring to fans in a region that includes India, the home of a professional cricket league that is one of the world’s most valuable sports properties.

“And when I say sport,” he added, “it’s almost always cricket.”

In Sri Lanka, an island nation of nearly 22 million people, the public response to men’s and women’s cricket matches in recent weeks has been unusually vivid. That is partly because people saw the matches as an escape from the daily hardships they faced, said Estelle Vasudevan, a Sri Lankan sports journalist who mainly covers cricket.

“What was noticeable was that, even when Sri Lanka was losing, people were partying in the stands” in a way they usually do not, said Ms. Vasudevan, a reporter for the sports news site ThePapare.com.

Understand What Is Happening in Sri Lanka

A president ousted. Sri Lanka plunged into a deep crisis when protestors, pushing for the resignation of President Gotabaya Rajapaksa, stormed his residence, pushing him to flee the country. Here is what to know:

Economic issues. Sri Lanka was once held up as an economic success story, with one of the highest median incomes in South Asia. But the country is now essentially out of money, and many people are living on the edge, a result of poor political decisions, reckless spending and economic mismanagement.

Growing discontent. Sri Lanka’s economic troubles amplified in 2022, when the country started running out of foreign currency. With supplies of food, fuel and other supplies dwindling, protesters started taking to the streets demanding that Mr. Rajapaksa and other members of his family, a powerful political dynasty, leave the government.

A new prime minister. As protests intensified, Mr. Rajapaksa began emptying his cabinet of family members. In May, his elder brother was forced out as prime minister and replaced by Ranil Wickremesinghe, who began discussions with the International Monetary Fund on the terms of an economic bailout.

The tipping point. On July 9, increasingly frustrated protesters took over the president’s residence in Colombo, while Mr. Rajapaksa went into hiding. The speaker of Parliament later said that the president and the prime minister had agreed to resign.

An acting president is appointed. On July 13, Mr. Rajapaksa fled the country. With the leadership of the nation uncertain, protesters surrounded the prime minister’s residence in Colombo, where they were met with tear gas. The prime minister, Mr. Wickremesinghe, was named acting president, declaring a state of emergency and vowing to retake government buildings overrun by protesters. On July 20, Mr. Wickremesinghe was elected president by lawmakers in Parliament.

Many Sri Lankans also saw professional cricketers as aligned with their efforts to oust President Gotabaya Rajapaksa and his powerful family from politics. (Mr. Rajapaksa resigned last week, a day after fleeing the country. On Wednesday, lawmakers chose one of his allies, Ranil Wickremesinghe, to replace him.)

Former high-profile cricketers, including the Hall-of-Famer Kumar Sangakkara, have rallied support for the movement on social media in recent months. Both of the current men’s team’s captains have attended protests, and one dedicated the victory over Bangladesh to those back home.

“We are having a tough time there,” the captain, Dimuth Karunarathna, wrote on Twitter in May, referring to power cuts and other disruptions. “This win brings some joy to their faces.”

Cricket has featured indirectly in the demonstrations. Protesters often chat about the sport and swap match scores, Mr. Siddhique said. When some of them stormed Mr. Rajapaksa’s residence this month, a few paused to watch cricket on his television.

But the sport is also feeling pressure from the crisis that has led to shortages of essentials like food and fuel. Some matches in Sri Lanka’s domestic cricket league have been disrupted because teams could not travel amid curfews, for example. And a member of the men’s national team, Chamika Karunaratne, told a reporter this past week that he had missed practice because he had been waiting in line to fill his car with gasoline.

The question now is whether the matches themselves will have to stop entirely, as they did for several months during a coronavirus outbreak two years ago. Some critics have argued that it does not make sense to run stadium floodlights at a time when electricity is so scarce.

Sanjeewa Kumara, who lives in Saudi Arabia and helps run a club for Sri Lankan cricket enthusiasts, said that people who administer the sport there should “work a bit harder” to bring cricket into the country because that would boost morale and aid the battered economy.

“The enthusiasm to watch and enjoy cricket has never faded away from Sri Lankan cricket fans, even during such a stressful, chaotic situation in the country,” said Mr. Kumara.

For now, the men’s national team’s upcoming matches against Pakistan have been relocated to Galle from Colombo amid fears of further civil unrest. The Lanka Premier League — a series of matches in the T20 cricket format that were scheduled to be held in August — has been postponed indefinitely.

There is also widespread speculation that Sri Lanka will not host this year’s Asia Cup for T20 as planned. The International Cricket Council referred questions to the Asian Cricket Council, which organizes the event. The A.C.C. did not respond to a request for comment. Neither did Sri Lanka’s official governing body for cricket.

Ms. Vasudevan said she put the chances of Sri Lanka not hosting the Asia Cup at 90 percent. “Hosting nine teams is not possible even if they wanted to,” she said.

Mr. Siddhique, the cricket fan, said that no matter who hosts the tournament, Sri Lankans hope that their team can win the title by beating India, a powerhouse rival.

Protests against Sri Lanka’s new government will inevitably continue, he added, and another big cricket win would most likely go a long way toward boosting the national mood in a time of turmoil.

“For sure, trust me, that will be a huge, huge inspiration,” he said.