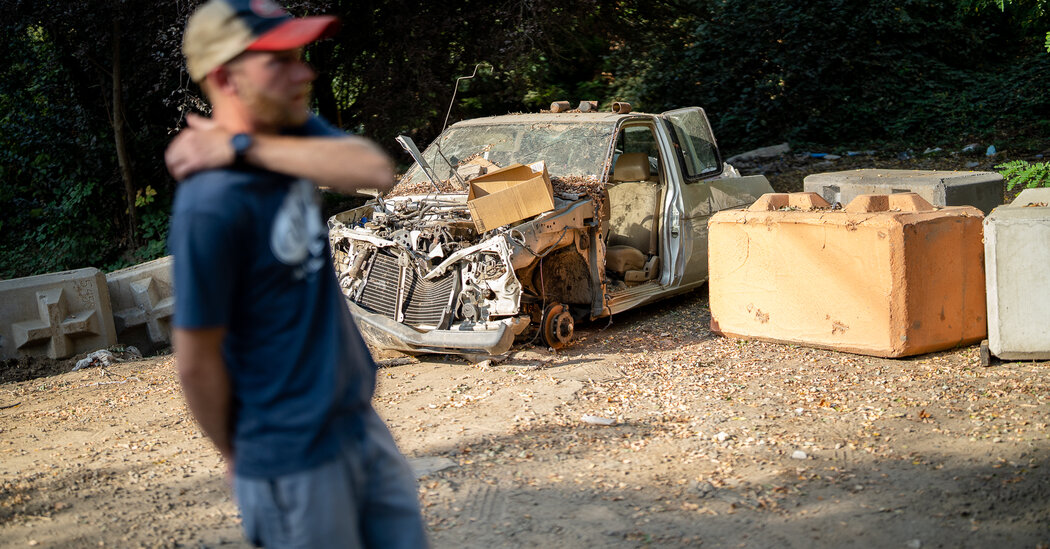 In Portland, Ore., vehicle thefts have soared, and the police say they are focused on other crimes. Now victims are helping each other track down their own cars.

PORTLAND, Ore. — At the end of a quiet residential street in north Portland, Titan Crawford took a calming drag off his cigarette, and then shuffled past the gutted shell of a stolen Nissan pickup truck and into the patch of woodlands beyond.

A little ways in, there was a Mazda sedan, flipped upside down. He passed a Cadillac Escalade, its rainbow bumper sticker one of the few features that remained intact. In the bushes nearby, there was a boat filled with furniture, tires and shoes. Mr. Crawford checked vehicle identification numbers and captured videos of an array of metal hulks along the way, but came away disappointed.

“Nothing here is salvageable,” he said.

For much of the past year, Mr. Crawford, 38, has led a growing network of volunteer sleuths who scour Portland’s streets, alleys and forests, racing against time in hopes of finding stolen vehicles before they end up shredded for parts.

There is no shortage of work to be done. Vehicle thefts in Portland are on track to reach well over 10,000 this year, more than triple the number the city recorded a decade ago, part of a nationwide trend that accelerated during the coronavirus pandemic. In Portland, the brazenness of the crimes, inattention from the police and desperation of residents who suddenly find themselves missing one of their most valuable possessions has led many to take matters into their own hands.

“It would be cool if the city could do this and I didn’t have to,” Mr. Crawford said. Similar groups have popped up and grown around the country as vehicle thefts have soared.

For Mr. Crawford’s network, the effort is less about vigilante justice — his group rules say that people who take the law into their own hands will not be tolerated — and more about community building and expanding eyes and ears around town.

Rewards aren’t allowed either: The group wants people motivated by a desire to help, rather than focusing on finding cars that might earn money.

Neighbors share pictures of license plates, keep watch during commutes to work and hunt online for reports of stolen vehicles.

Nearly every day, the group, PDX Stolen Cars, helps a resident reconnect with a vehicle in Portland or the surrounding suburbs.

“This is an army, and it’s exploding,” said Victoria Johnson, who joined the group after someone drove off with her SUV while she was helping at the scene of a car accident. “It does a body good to give back and help.”

The nation is on track to record about 1.1 million stolen vehicles this year, the highest number in more than a decade but still well below numbers set in the early 1990s, when many cars were easy to steal without a key, according to the National Insurance Crime Bureau, an insurance industry group that tracks claims. The trend appears to be connected in part to the pandemic, as disruptions in the supply chain have created a surge in the value of catalytic converters and other car parts and have made vehicles a more lucrative target for theft, said David Glawe, the bureau’s chief executive.

Carjackings are also up significantly in many cities, including Portland, where the police said they did not keep statistics but had noticed a spike in reports.

Car thefts have lately taken a back seat to more violent offenses. Portland set a record for homicides last year and could surpass that number this year, part of a rise in crime that has deepened public unease and reverberated in the race for governor in Oregon, where a Republican has a possible path to victory for the first time in four decades. The Republicans also have their sights on three House seats in the state, where G.O.P. candidates have focused some of their attacks on the public protests against police brutality that rocked Portland in 2020.

The Portland Police Bureau said staffing challenges had prevented it from doing more to help solve car thefts. Last year, as the department struggled to retain and recruit officers and the city shrank the number of authorized positions, the department employed fewer sworn officers than at any point in the past 30 years, although it has recently started growing again.

Sgt. Kevin Allen said the police bureau has often had to prioritize other crimes over vehicle theft but is not ignoring them. One precinct, he said, has undertaken occasional special missions to target and recover stolen vehicles.

“Unfortunately,” he said, “it’s not hard to find them.”

Older vehicles, which often lack alarms or modern security systems that prevent hot-wiring, remain among the most popular to steal. But newer vehicles can also be snatched when people leave their key fobs inside the car, or thanks to videos that show people how to steal some vehicles with little more than a USB charging cable.

The results can be disastrous for people with limited incomes, or those who do not carry comprehensive insurance on their vehicles. A theft or a stolen catalytic converter can mean being left without a vehicle, or with a bill they cannot afford.

“That’s absolutely devastating. And we are seeing that over and over,” Mr. Glawe said.

Mr. Crawford said he first became caught up in looking for Portland’s missing cars a year ago when he was walking his dog and came across a vehicle that looked out of place. He posted a photo of it on social media, and was soon gathering the many people interested in the issue into a Facebook group. What started as a membership of dozens became hundreds, and then thousands, with many people trying to track down their own vehicles.

One man was able to recover a cherished motorcycle that he uses to honor veterans at military funerals. The group located the stolen car of a police officer’s wife.

Ms. Johnson found the group after losing her Lincoln Navigator during the roadside stop and went scouring online for a way to track it down. She didn’t stop there, and drove a meticulous grid through the area where her vehicle had been taken.

She didn’t find it, but she did spot another man’s vehicle that had been posted to the group, which helped him recover it. Days later, that same man texted with a surprise: He had found Ms. Johnson’s vehicle. She now spends several days a week checking her area for stolen cars and says she has discovered several.

Nicole Heath, one of the administrators of the group, hunts for vehicles during every one of her commutes. Once, she saw and reported someone trying to break into a car with a screwdriver. Another time, some people yelled at her for examining a car that had been reported stolen. She proceeds with caution and urges others to do so, noting that one woman looking for stolen vehicles was assaulted when she was seen taking videos of cars parked in a homeless encampment.

“No car is worth your life,” said Ms. Heath, who became active in the group after her husband’s motorcycle was stolen in January. It has not been recovered.

The hunt for missing vehicles has become a second job for Mr. Crawford, who sells trucks for a living and has a deep familiarity with vehicle brands and styles from years in auto sales.

On a recent day off, Mr. Crawford was at his computer by 7 a.m., downing coffee as he reviewed emails and Facebook messages, using an online database of vehicle history reports to check vehicle identification numbers that users had shared of vehicles that seemed out of place — some with torn-out interiors, damaged ignitions or that were otherwise seemingly abandoned.

Later in the morning, Mr. Crawford got in his red pickup, which was leaking coolant from some deferred maintenance and sporting scratch marks down the side from a vehicle recovery mission that had taken him deep into the woods. He rolled down his windows, tuning in to the happenings around him and scouring side streets.

At one point, he pulled behind a Toyota SUV that was emitting an unusual buzzing noise.

“The anthem of Portland: no catalytic converter,” he said, sipping a can of Red Bull.

Minutes later, Mr. Crawford pulled up at the scene of a vehicle in northeast Portland that had been reported by neighbors, a car with no plates and a partially gutted interior. He checked the VIN, found it had recently been reported as stolen and notified the police.

He spent the rest of the day roaming through neighborhoods, capturing videos of cars that seemed out of place so he could check the license plates later. Many stolen cars that can still be recovered end up resurfacing in industrial neighborhoods, at auto supply stores, in parks or shopping centers, he said.

Homeless encampments are also a common spot, Mr. Crawford said as he cruised past one of them, taking care not to bother residents. He said some homeless neighbors have joined the group to help find cars. At the encampments, he overlooks any other minor misdeeds he may encounter.

“My only interest is stolen vehicles,” he said. “They can do whatever they want. Just don’t bother me. And don’t drive stolen cars.”