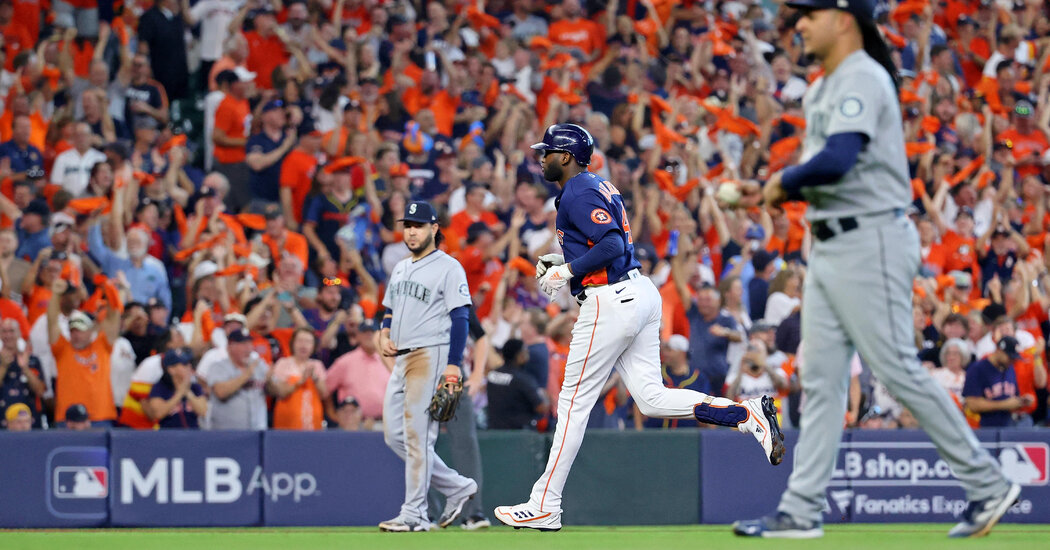 For the second straight game, a Yordan Alvarez home run turned a late deficit into a lead as this division series heads to Seattle with Houston cruising.

HOUSTON — Two days after coming from behind to beat the Mariners with a walk-off home run, the Astros were still reveling in the electrifying energy from the win. They channeled that feeling on Thursday, defeating the Mariners again, this time, 4-2, to take a commanding two-games-to-none hold over the series.

Before starting on Thursday, Astros pitcher Framber Valdez said on Wednesday that when Yordan Alvarez came up to the plate on Tuesday with two runners onboard, the team “knew something good was going to happen.” The key for Game 2 after Alvarez’s walk-off homer in Game 1, Valdez said through a Spanish-language interpreter, was to keep up that positivity.

“I think that it’s really important for us to continue that energy,” Valdez said.

Like Valdez, Astros Manager Dusty Baker said on Wednesday that keeping up the momentum from Tuesday’s game was crucial for Game 2.

“What games like that do, it excites the fans, it excites us,” Baker said. “It transcends from top to bottom, to the fans, to the office workers, to the janitors, everybody in the organization, just trying to think positive about an outcome of the game.”

The Astros held on to that positivity for Game 2 and again counted on Alvarez, who went deep again Thursday. This time, Alvarez hit a two-run home run to left field in the bottom of the sixth, turning a 2-1 deficit for the Astros into a 3-2 lead.

“He’s a big boy,” Baker said of Alvarez after the game. “I call him Grande. He comes up big. We love having him at the plate. He likes to be in the big moment. His concentration and discipline is way ahead of his years.”

Valdez started Thursday’s game efficiently, retiring the Mariners’ first eight batters of the day. He was aided by Kyle Tucker, who hit a solo home run to right field in the second inning.

Valdez struggled in the fourth, giving up a walk and then a double with one out, setting the stage for Carlos Santana with runners at second and third.

Santana hit a short ground ball that Valdez fielded. He tried to get the out at home but made an errant throw to his catcher Martín Maldonado, giving up a run. The error prompted a visit to the mound from the Astros pitching coach, Josh Miller, and Maldonado.

The Astros threw out Santana on the basepaths after the error, but Valdez then gave up another run when Dylan Moore lined a single to right field. But he quickly settled down again in the fifth inning, retiring three straight batters with back-to-back strikeouts and a flyout.

Valdez started to unravel again in the sixth inning, loading the bases with two outs with a walk, a double and another walk.

That was enough for Baker, who pulled Valdez from the game, and called on the right-hander Héctor Neris from the bullpen. Neris helped the Astros escape the inning unscathed with a groundout.

The Astros took the lead in the bottom half on Alvarez’s homer to left field that drove in Jeremy Peña, who had singled to get on base.

After the game, Alvarez said he tries to visualize any given possibility when he is batting.

“I just try to disconnect from everything when I go up there to the plate,” he said. “If everything goes according to plan, we’ll get a positive result. Obviously, there’s still a pitcher out there who is trying to get me out.”

Alex Bregman, the Houston third baseman, said after the game that Alvarez has come through for the team not just offensively but in the outfield as well.

“He’s been super clutch for us all year,” Bregman said. “Not only offensively, but defensively. He’s made super clutch defensive plays. He’s got all the tools. He can run, he can hit, he can hit for power, he can throw, play defense.”

Despite allowing a second home run, starter Luis Castillo remained in the game to start the bottom of the seventh. Castillo had pitched effectively throughout the afternoon, going into the seventh with 75 pitches.

After recording two outs, Castillo gave up a double to Aledmys Díaz, but he managed to get out of the inning without giving up another run. Castillo ended his day with seven strikeouts in seven innings and three earned runs from the two homers.

The Mariners managed to get runners onboard in the seventh and eighth innings, but failed to score, as the right-handed relievers Bryan Abreu and Rafael Montero helped the Astros hold onto their lead.

In the bottom of the eighth, Peña walked with two outs, paving the way for Alvarez to add an insurance run, but the Mariners intentionally walked him.

Baker compared the Mariners’ walking Alvarez to when teams would walk Barry Bonds, which Baker saw plenty in his 10 seasons as the Giants’ manager.

“That was some Barry Bonds-type stuff there,” Baker said. “I mean, that’s the ultimate respect.”

Mariners Manager Scott Servais said after the game that Alvarez’s home run in the sixth factored into the team’s decision to walk him his next plate appearance.

“Obviously he has done some damage against us in this series,” Servais said. “He’s hot right now. You’ve got to recognize that.”

Bregman was able to take advantage, hitting a single to right field to bring in Peña, who beat Mitch Haniger’s throw to home plate, extending the Astros’ lead to 4-2.

The Astros sent Ryan Pressly to the mound in the top of the ninth to close out the game. Pressly walked Adam Frazier to start the inning, and then got J.P. Crawford to line out into an unassisted double play.

With two outs, Julio Rodríguez hit a double to center field, giving Ty France a chance keep the Mariners in the game, but Pressly struck out France to give the Astros the win.

The Astros and the Mariners will now travel to Seattle for Game 3 on Saturday in what will be the first postseason game in Seattle since October 2001. If needed, the teams would also play Game 4 in Seattle on Sunday, and then they would return to Houston for Game 5 on Monday.

Peña said in the clubhouse after the game that the Astros know the “job is not finished,” heading to Seattle with a 2-0 lead in the series.

“I expect them to show up,” Peña said of the Mariners. “I expect their stadium to be rocking as well.”

Lockdown in Delhi stretched by per week, tweets CM Kejriwal

Priyanshu Painyuli learns to speak in Kutchi during ‘Rashmi Rocket’ shoot. Here’s what he...