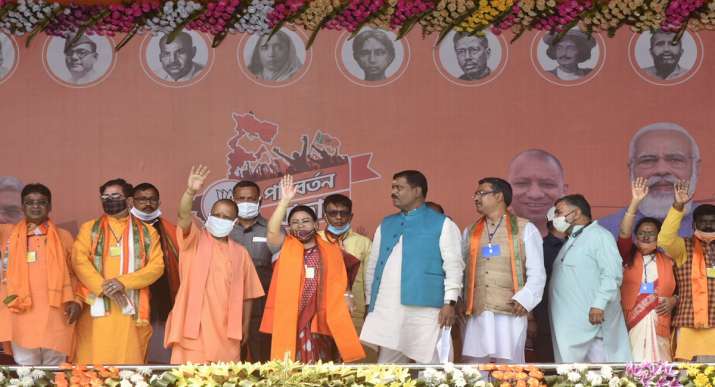 Yogi Adityanath said the Bengal CM was allowing illegal immigrants into the state just for the sake of her vote bank politics.

Highlighting the poor law and order situation in the state, Yogi Adityanath said issues like cow smuggling, ‘love jihad’ will be addressed immediately if the Bharatiya Janata Party (BJP) is voted to power in the state.

“If the BJP is voted to power in West Bengal, we will stop cow smuggling within 24 hours. Appeasement politics for the sake of vote bank has endangered the security of not only West Bengal but also of the country. The TMC government has a problem with refugees getting citizenship but has no issue with illegal immigrants coming to the state,” he said.

Raking up the issue of ‘love jihad’, the Uttar Pradesh CM said that the Trinamool government has failed completely in controlling such incidents, on the other hand UP has got a law for it.

Claiming that the raising of ‘Jai Shri Ram’ slogan is not allowed in West Bengal, Adityanath said that the people of the state will give a befitting reply to the TMC government for “playing with their religious sentiments”.

“Jai Shri Ram slogan is not allowed in West Bengal, but people won’t allow this to continue. ‘Love jihad’ incidents are happening in Bengal.

In Uttar Pradesh, we have made a law to stop such incidents but the TMC government has failed to stop both cow smuggling and ‘love jihad’,” he said.

West Bengal will vote in eight phases between March 27 and April 29 to elect new members for the 294-seat state assembly.

READ more...  'Even after my throat is cut I will say...': Mamata's nephew Abhishek Banerjee in South Kolkata