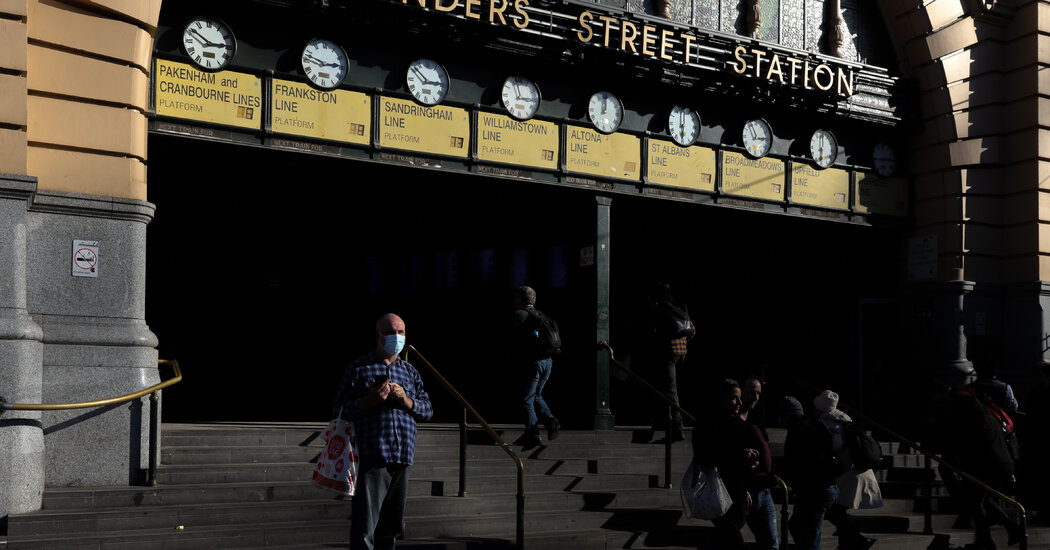 Omicron subvariants are driving a winter surge in Australia, but officials’ health advice has been confusing, to put it mildly.

As Australia enters a new wave of winter coronavirus cases, driven by highly infectious Omicron subvariants, the health advice has been … confusing, to put it mildly.

In Victoria, the health minister rejected the chief health officer’s recommendation to broaden mask requirements, saying it wasn’t the most effective way to “get the message out about the importance of mask wearing.” The state education department wrote to parents to ask that students wear masks in class — but it wasn’t a mandate, the education minister said.

The situation gets no clearer at the federal level. Paul Kelly, the federal chief health officer, encouraged employers to let people work from home if possible. But Prime Minister Anthony Albanese stopped short of recommending the same thing. “Businesses have adjusted,” he hedged. “It’s a matter of getting the balance right. I’m confident that with a bit of common sense applied we can do that.”

It’s a far cry from the early days of the pandemic, when politicians and the health authorities, for the most part, spoke with one voice and people had no doubt about what the recommended course of action was. And this ambiguity comes as we’re on the brink of our highest hospitalization rate since the start of the pandemic. So what’s changed?

The public — especially here in Victoria — is weary of lockdowns and mandates. The few remaining restrictions, like mask wearing on public transport, are being flouted. Now that we’ve had a few months of what passes as normalcy, in which the coronavirus didn’t dominate the news, it seems even harder to contemplate a return to working from home, mask wearing and general hypervigilance.

There also seems to be more awareness of the damage mandates have done to mental health and overall well-being. “The imposition of controls on people’s behaviors has an impact on people’s health,” Mr. Albanese told The Project on Wednesday. “And particularly young people, we’re seeing a really problematic increase in incidents of severe consequences when it comes to young people’s health, but others’ as well.”

But another factor that’s changed is the political environment, said Stephen Duckett, the former health director of the Grattan Institute think tank. The legacy of Scott Morrison’s government is that the public debate about pandemic restrictions has been dichotomized, he said.

“The previous prime minister said it’s lockdowns or nothing and refused to talk about a nuanced response,” Dr. Duckett said.

As our vaccination rates rose, the federal government pushed the message that shots were all we needed to see all restrictions lifted, and it encouraged a rhetoric of personal responsibility. The message was: living with the coronavirus means the government doesn’t intervene.

That message has stuck, Dr. Duckett said, and the Labor government is now fearful of being seen as reneging on it, especially with part of the media eager to paint it as the party that will return us to lockdowns and mandates.

Politicians and the health authorities now need to move beyond this all-or-nothing view, Dr. Duckett said. A mask mandate, which is relatively nonintrusive, would be a reasonable step, he said.

But even without a mandate, there are things the authorities can do now to encourage mask wearing beyond just recommending it.

Clearer communication with the public about the risks of this coronavirus wave is an obvious one, said Holly Seale, an infectious disease social scientist at the University of New South Wales. The authorities could also lean on shopping centers and department stores to go back to handing out masks at entrances, which would serve as a reminder for customers while also getting more masks into people’s hands.

If the authorities persist with the no-mandate strategy, “what I would hope the government is doing is putting some resources into helping people change their behavior in some other way,” she said.

Now for this week’s stories: