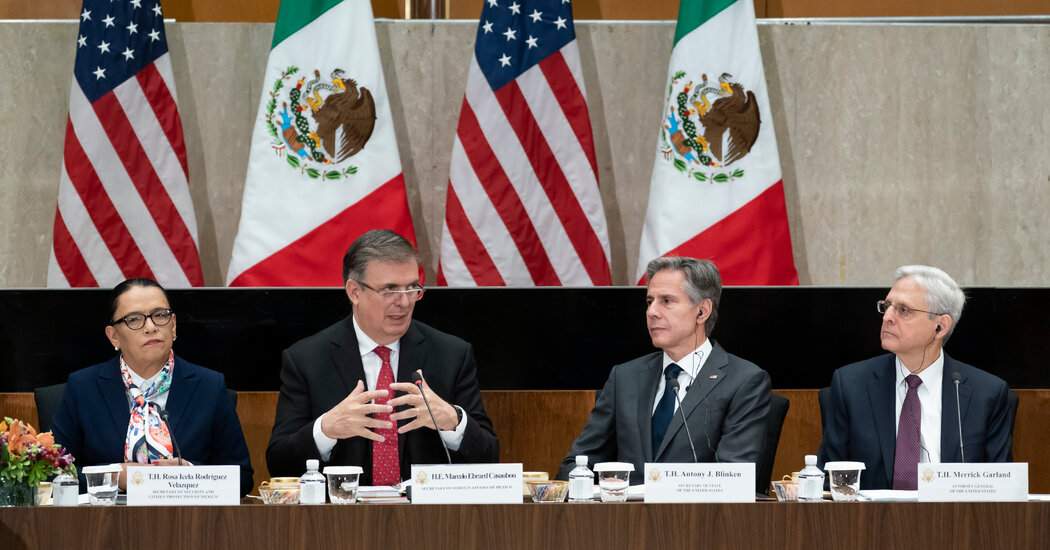 WASHINGTON — Secretary of State Antony J. Blinken met with Mexico’s foreign minister on Thursday for the second time in just over a month, as the Biden administration focused on Latin America amid politically perilous levels of migration at the southern U.S. border.

Mr. Blinken joined several top Biden administration officials at an event with the minister, Marcelo Ebrard, officially titled a “high-level security dialogue.” It was billed as a discussion about protecting the health and safety of American and Mexican citizens, including from gun and drug smugglers.

But immigration was inevitably a key theme of the meeting, at a moment of vast migration across Central and South America — a subject with explosive political resonance less than a month before the midterm elections.

Biden officials chose their words carefully on the sensitive topic of immigration, avoiding phrases like “border crisis” and emphasizing that the effects of social and economic upheaval in the region, thanks in part to the pandemic, are not unique to the United States.

Historically high migration is “not specific to the U.S.-Mexico border, but is a challenge for the entire hemisphere,” Attorney General Merrick B. Garland said, calling it “a phenomenon across the world. That number of displaced people is at an all-time high.”

Republican congressional candidates are making Mr. Biden’s border policies a central campaign theme this fall, accusing the president of failing to stop the flow of undocumented migrants into the country. An array of Biden officials have been working to stem the tide, to little avail.

But Mexico has taken some recent steps to at least help mitigate the flow. On Wednesday, the Biden administration announced it would accept up to 24,000 Venezuelans via a humanitarian parole plan that grants them a narrow pathway to legalized status, while expanding its use of a public health rule to expel to Mexico Venezuelans who illegally cross the U.S. border. The United States cannot return Venezuelans to their home country because of its toxic relations with Washington.

Mexico has agreed to accept the Venezuelans, who will be returned under the provision known as Title 42, a public health measure invoked during the pandemic that many experts say has outlived its plausible application. When the Biden administration announced the new plan for Venezuelans, it also said it would add nearly 65,000 more nonagricultural work visas, many of which will benefit Mexicans.

“Those who attempt to cross the southern border of the United States illegally will be returned,” Mr. Mayorkas said. “Those who follow the lawful process we announced yesterday will have the opportunity to travel safely to the United States and become eligible to work here.”

Though consumed for the past year with Russia’s initial military buildup and then invasion of Ukraine, Mr. Blinken has spent increasing amounts of time on Latin America this fall.

Mr. Blinken toured South America earlier this month, stopping in Colombia, Chile and Peru, where he attended a migration meeting at an Organization of American States summit, at which regional officials discussed efforts to address the root causes of migration to the United States.

In Bogotá, Colombia’s capital, Mr. Blinken visited a migrant integration center, funded by the U.S. Agency for International Development, which helps find work, health care and other necessities for some of the 2.5 million Venezuelans who have crossed the border between the countries in recent years. The goal, U.S. officials say, is humanitarian — but also to keep Venezuelan migrants content enough that they do not travel on to Mexico with the goal of crossing into the United States.

“Guatemalans, Hondurans, El Salvadorans, Haitians, Cubans, Venezuelans, Nicaraguans — so many people on the move, and it creates a tremendous challenge for all of us,” Mr. Blinken said at the center.

Mr. Blinken opened his remarks on Thursday by noting that the United Nations General Assembly had voted overwhelmingly the day before to condemn Russia’s annexation of four partially captured regions of Ukraine.

The resolution received 135 votes in favor with just Syria, North Korea, Belarus and Nicaragua joining with Russia in voting no. Thirty-five nations abstained, including China and India.

Mexico supported the resolution. Mr. Lopez Obrador has criticized U.S. military support for Ukraine and offered to mediate peace talks, but he has found little backing for the initiative.