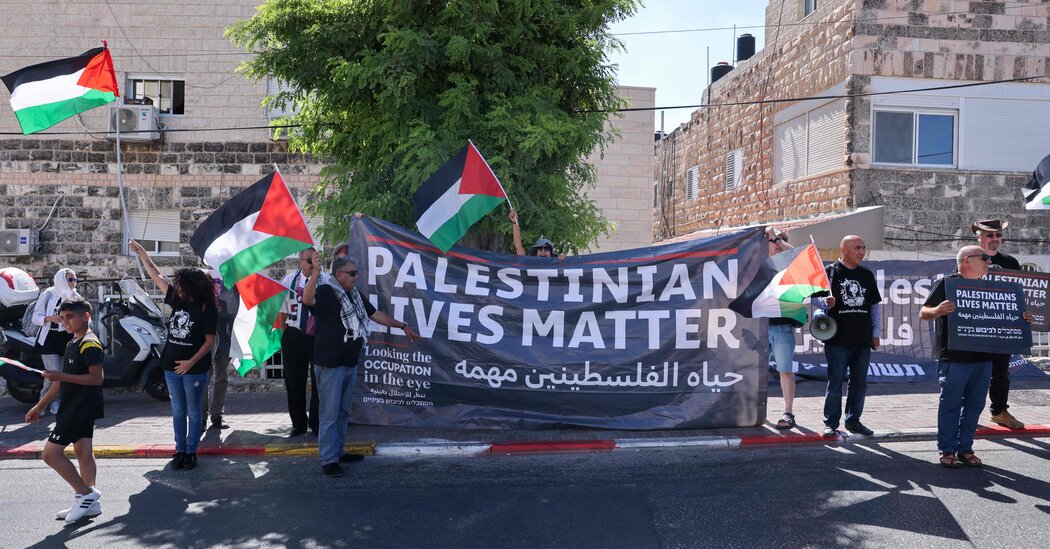 Palestinians protested on Friday over President Biden during his meetings with Palestinian health workers and officials, amid widespread frustration with U.S. support for Israel and the Biden administration’s policies toward Palestinians.

One protest was held in East Jerusalem, where Mr. Biden visited a hospital that his administration hopes to support with new American funding. A second protest was set to take place on Friday in Bethlehem, the West Bank city where Mr. Biden will meet with the president of the Palestinian Authority, Mahmoud Abbas. Other protests took place in Gaza and the West Bank on Thursday.

On the eve of his visit to Bethlehem, the Biden administration announced $100 million in new funding for several hospitals for Palestinians in East Jerusalem, subject to congressional approval, and $201 million for the United Nations body that assists Palestinian refugees. It also said Israel had agreed to roll out 4G phone reception in Palestinian-run areas of the West Bank.

“They left everything else,” said Suhaib Zahda, a political activist in Nablus, West Bank, “to ask for 4G?”

Palestinians have long questioned Washington’s ability to neutrally mediate the Israeli-Palestinian conflict, citing strong American support for Israel at the United Nations and the size of U.S. financial and military support to Israel, which has cumulatively received more American aid than any other country since World War II.

Some Palestinians initially saw Mr. Biden’s presidency as a welcome relief from the Trump administration. But many now see the Biden administration as a disappointment because of its failure to reverse several Trump-era policies.

On Thursday, Mr. Biden restated his support for Palestinian statehood, calling for a “lasting negotiated peace between the State of Israel and the Palestinian people,” and underscoring his backing for a two-state solution to the conflict. His administration says it has also restored hundreds of millions of dollars in funding for Palestinian institutions that was cut under Mr. Trump.

But following Israeli opposition, it has not reopened the U.S. consulate to the Palestinians in Jerusalem or the Palestinian mission in Washington, both of which were shut under Mr. Trump. It has also not formally rescinded the Trump administration’s legitimization of Israeli settlements in the West Bank, which are considered illegal by most of the world.

Mr. Zahda, the political activist from Nablus, said Mr. Biden’s visit to Bethlehem was a largely empty gesture. “Palestinians consider the U.S. as a partner in the occupation, whether by funding it or by supporting Israel politically,” said Mr. Zahda, 39.

Palestinians’ criticism of the Biden administration grew recently after the killing in May of a Palestinian American journalist, Shireen Abu Akleh, in the West Bank. A United States government investigation found that Ms. Abu Akleh was probably killed by Israeli fire, but that it was “the result of tragic circumstances” rather than a deliberate act. The State Department said that Washington would not push Israel to pursue a criminal investigation into any Israeli soldier.

In doing so, the State Department said it was not trying to favor Israel, but it nevertheless angered Palestinians who felt that Washington was shielding Israel from accountability.

Diala Ayesh, a Palestinian lawyer and a protest organizer in Ramallah, said that many young Palestinians no longer held hope in any U.S. administration.

“We’re obviously not demanding or expecting anything from him,” Ms. Ayesh, 26, said of Mr. Biden. “We had hoped that Abbas would reject the meeting all together and save us and himself the humiliation.”

Another form of protest could also register in international news footage.

As his convoy drives through the West Bank on Friday, the president will pass near large banners that read: “Mr. President, this is apartheid.”

The term, which refers to the racist legal system that governed South Africa until the early 1990s, is an explosive charge in the debate around Israel’s treatment of the Palestinians. A small but growing number of Israeli and international watchdogs accuse Israel of practicing a form of apartheid, echoing claims that Palestinians have made since at least the 1960s; the Israeli government condemns it as a baseless smear.

The billboards were put up on Wednesday by the Israeli rights group B’Tselem — which began to apply the term to Israeli policies last year — in several locations around Ramallah and Bethlehem.

Cyclone Gulab LIVE: Landfall process to continue for next 2-3 hours, wind speed up...