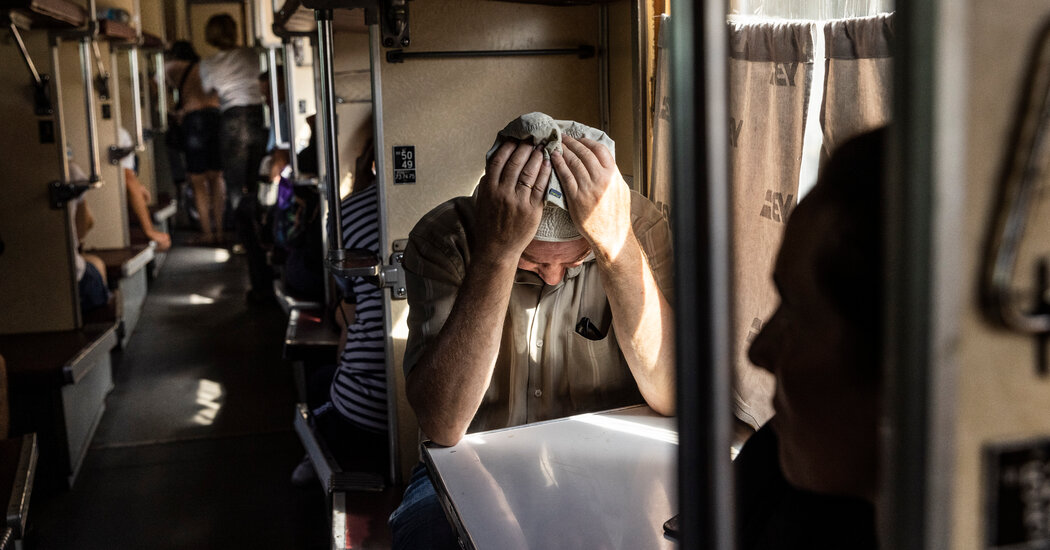 The president’s announcement is the broadest government directive issued thus far in the war, coming after months of relentless Russian bombardment.

DONETSK PROVINCE, Ukraine — Thuds from the artillery pounding Ukraine’s embattled east reverberated in the distance, yet it was the shouts of playing children on a recent afternoon that echoed across the yard near the front line.

The scene spoke to the grim choice that residents face after President Volodymyr Zelensky called this weekend for a mandatory evacuation of the region, directing hundreds of thousands of civilians in eastern Ukraine to leave their homes.

“We could go,” said Natasha, a 46-year-old mother of six, talking over the din of war with unflagging calm. “But how would we earn money? And I have kids to feed.”

Mr. Zelensky’s evacuation announcement is the broadest government directive issued thus far in the war, coming after months of relentless Russian bombardment has destroyed the infrastructure to deliver heat and electricity across eastern Ukraine. Russian forces are now intensifying their offensive in Donetsk Province after seizing nearly all of neighboring Luhansk.

Fighting is also escalating in Ukraine’s south, ahead of an anticipated Ukrainian offensive, and shelling intensified in regions along the northern border as well.

In Mykolaiv, the southern city that faced fierce Russian bombardment early in the invasion, officials said that a hotel, a sports complex, two schools and scores of homes were in ruins after Russian shelling early on Sunday. Officials described it as the worst shelling there yet — a remarkable assessment given the pounding that the city had already endured.

Emergency crews racing between blast sites in Mykolaiv were still working to establish a casualty count, but one of Ukraine’s richest businessmen, Oleksiy Vadaturskyi, and his wife, were said to be among the dead.

Mr. Vadaturskyi’s company, Nibulon, which confirmed the deaths, has built storage facilities and other infrastructure needed to export grain. He was killed just as the first shipments of grain since the beginning of the war were being loaded onto freighters at Ukrainian ports on the Black Sea after a monthslong blockade.

It was not clear if Mr. Vadaturskyi was directly targeted or if he was, like many other civilians killed by Russian bombs, just in the wrong place at the wrong time.

Also Sunday, Moscow accused Ukraine of being behind a drone attack on its Black Sea Fleet headquarters in occupied Crimea, and Ukrainian officials said there was growing evidence that a deadly explosion last week at a Russian penal colony was ordered and carried out by Russian forces.

In Donetsk, Ukrainian authorities said Mr. Zelensky’s evacuation order this weekend was a bid both to save civilian lives and to free up valuable resources for an escalation of fighting ahead.

“The sooner it is done, the more people leave Donetsk region now, the fewer people the Russian Army will have time to kill,” Mr. Zelensky said in his nightly address on Saturday.

The directive aims to give local officials more time to move civilians, relieving pressure on beleaguered emergency crews and helping the government get ahead of what it fears could become an unmanageable crisis in the coming months.

The Russians control around 60 percent of Donetsk Province, and Ukrainian officials have warned that Moscow will step up efforts to take the rest of the province as it moves ahead with plans to annex parts of Ukraine.

Iryna Vereshchuk, a deputy prime minister of Ukraine, said as many as 200,000 people needed to leave the region, warning that there would be no heat or gas supply in Donetsk this winter because of Russia’s destruction of gas pipelines.

Hoping to ease the economic anxieties of those reluctant to leave, Mr. Zelensky said the government would help people logistically and financially. Natasha and her family know those economic worries well.

She and her husband, Oleh, 49, are the only couple with children who remain in their village just a few miles from Russian positions in eastern Ukraine. Their dilemma reflects the precarious situation of families in rural Donetsk who cling to a self-sufficiency even as war threatens to sweep over them.

The couple, who asked that their surname not be published to avoid retribution, both lost their jobs when nearby factories closed with the onset of war five months ago, and they have struggled to make ends meet since.

Government services in the area have largely ceased, and Natasha became the family’s main breadwinner when neighbors fled and left their house and dairy cows in her care. She rises at 4:30 every morning to milk the cows, and she taught herself how to make sour cream and cottage cheese, which she sells in the nearby town market.

But customers are dwindling as Russian rockets have hit the area with growing intensity. “We’ve had to manage by our own devices,” Natasha said.

The family has lived through the turmoil of war before. In 2014, pro-Russian separatists seized parts of Donetsk and in the fighting that ensued their house was destroyed. The separatists evacuated the family, with the four children they had at the time, to Crimea. Later they were moved to Russia.

Some of their friends who had also been evacuated stayed in Russia and acquired Russian citizenship but Natasha and Oleh decided to return home, where the Red Cross helped rebuild their home.

“I wanted to eat sala and our own apricots,” she said. Sala, or lard, on a slice of bread, is a favorite Ukrainian staple.

Two more children came along and by this fall, they are all supposed to be in school, Natasha said. But school is suspended now, too.

“I don’t know how it will all be,” Natasha said. “The teacher called. She said she might teach them by phone.”

Elsewhere, Moscow accused Ukraine on Sunday of being behind a makeshift drone attack on its naval headquarters in the occupied port city of Sevastopol, Crimea. The strike caused a handful of injuries and minimal damage, but it was deeply symbolic, coming on Russia’s Navy Day and forcing the cancellation of naval celebrations.

Ukraine’s military denied responsibility for the drone strike on Sunday, but it also argued that Russian military facilities inside Crimea were legitimate targets. “We do not launch strikes on the territory of the Russian Federation,” it said. “Crimea is Ukraine.”

Russia’s annexation of Crimea in 2014 was deemed illegal by most of the international community. Now, Moscow is taking steps across recently seized territory to stage “referendums” similar to those that led to Crimea’s annexation, and moving otherwise to assimilate the population.

Russian-appointed administrators have handed out Russian passports, cellphone numbers and set-top boxes for watching Russian television. They have replaced Ukrainian currency with the ruble, rerouted the internet through Russian servers and arrested hundreds who have resisted assimilation.

Also on Sunday, Ukrainian officials cited newly released satellite photos as further evidence that a deadly explosion at a Russian penal colony last week was not the result of a Ukrainian missile strike, as Russia has claimed, but the work of Russian forces themselves.

The blast, at a camp in Russian-controlled territory in eastern Ukraine, killed at least 50 Ukrainian prisoners of war, many considered national heroes after being captured during a siege of a steelworks in the coastal city of Mariupol.

Since the explosion late Thursday, both sides have traded accusations over the source of the blast. While the Russian Ministry of Defense said on Sunday it would allow the International Committee for the Red Cross and the United Nations access to the penal colony, neither organization confirmed the claim.

The Red Cross said in a statement on Sunday that it has received no confirmation from Russia that it will be allowed to visit. There was no immediate comment from the U.N., which has said it stands ready to send experts for an investigation when both parties consent.