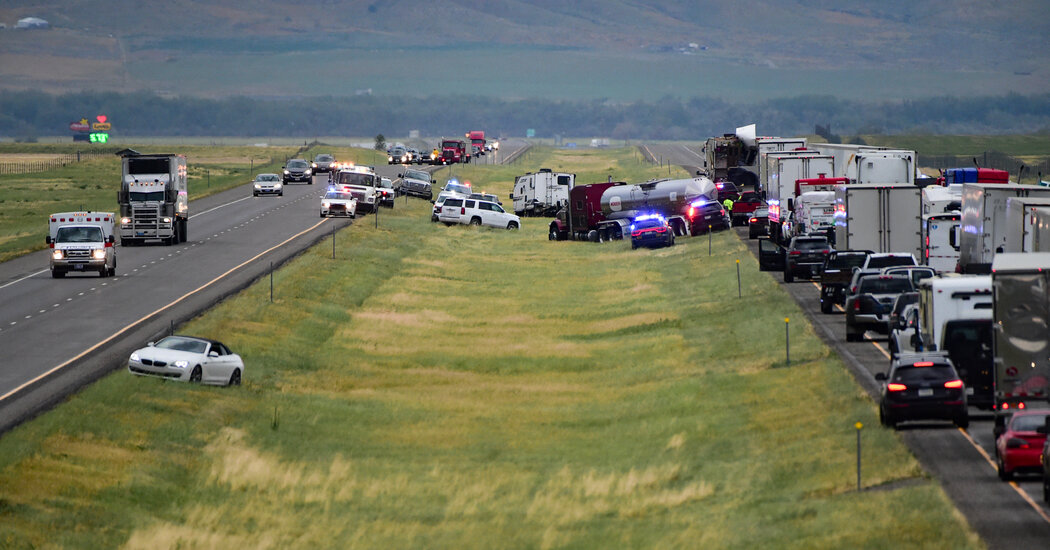 More than 20 vehicles were involved after a windstorm caused “near-blackout” conditions, the authorities said.

At least six people were killed and others were injured in southern Montana in a major car pileup on Friday afternoon during a windstorm that kicked up dust and caused “near-blackout conditions,” the authorities said.

The crash on Interstate 90 outside Hardin, Mont., a city of 3,800 people about 50 miles east of Billings, involved 21 vehicles, including six semi-trucks, Sgt. Jay Nelson, a spokesman for the Montana Highway Patrol, said in an interview. It was not immediately clear how many people had been injured, he said.

The authorities did not immediately release the names or ages of the victims.

“Everything is indicating there was an isolated weather event that caused near-blackout conditions at this location,” Sergeant Nelson said. “A dust storm in the area with extremely high winds is the preliminary cause of the crash.”

On Friday afternoon, thunderstorms in the area produced strong surging winds known as outflows, which travel about 30 miles ahead of the storms, said Nick Vertz, a meteorologist with the National Weather Service in Billings.

Late in the afternoon, there were wind gusts of 62 miles per hour that picked up dust and reduced visibility to less than a quarter of a mile, he said. Typically, the wind gusts produced by these storms are 30 to 40 miles per hour, Mr. Vertz said.

The crash, which occurred around 4:30 p.m., shut down traffic on Interstate 90 as the highway patrol investigated. As of about 9 p.m., the eastbound lanes were still closed, and officials were diverting traffic.

Gov. Greg Gianforte said late Friday on Twitter that he was “deeply saddened by the news of a mass casualty crash near Hardin.”

“Please join me in prayer to lift up the victims and their loved ones,” he said. “We’re grateful to our first responders for their service.”

'Remdesivir is not a life preserving drug', claims Centre after a few states report...