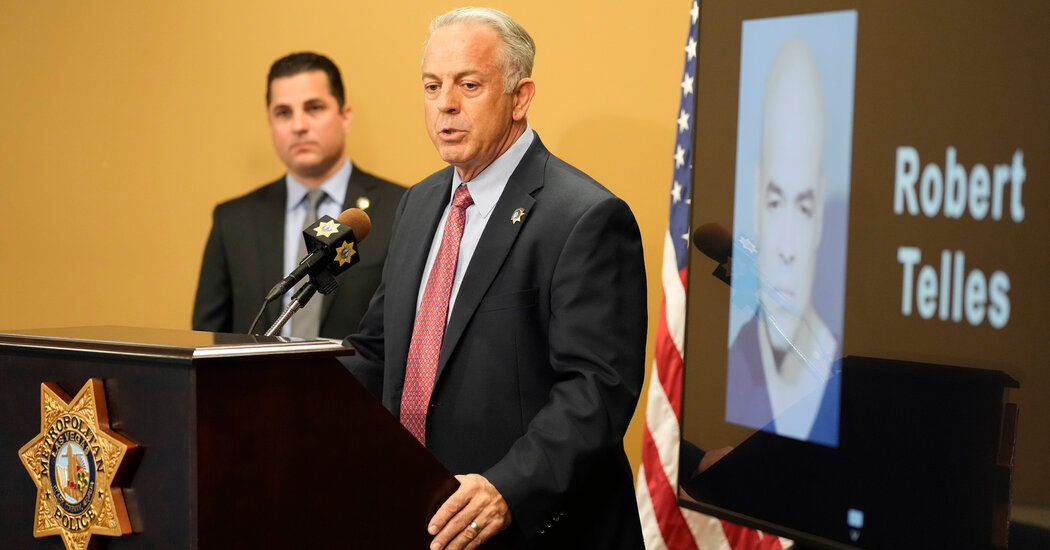 The Las Vegas Review-Journal said its slain reporter, Jeff German, had been “pursuing a potential follow-up story” about a politician who has now been accused of killing him.

LAS VEGAS — Authorities investigating the killing of a veteran Las Vegas journalist, Jeff German, said Thursday that they found D.N.A. at the crime scene that matched a public official who had been the subject of Mr. German’s recent reporting.

Robert Telles, the Clark County public administrator, was taken out of his home on a stretcher on Wednesday night and arrested on suspicion of murdering Mr. German. He had publicly expressed outrage over Mr. German’s coverage of his office, and the police said their investigation showed that he had also been upset that Mr. German was pursuing additional reporting.

“This is a terrible and jarring homicide — one that has deeply impacted Las Vegas,” said the Clark County sheriff, Joseph Lombardo. “Every murder is tragic, but the killing of a journalist is particularly troublesome.”

The authorities have not recovered a murder weapon but said they had found a hat and shoes that matched those of a person seen in surveillance footage at the crime scene. Both had been cut in an apparent attempt to destroy evidence, the authorities said, and the shoes had blood on them.

Mr. Koren said that Mr. Telles needed medical attention for self-inflicted wounds that were not life-threatening at the time of his arrest.

Mr. Telles, a Democrat, had been elected four years ago to lead a small office that administers the estates of people whose beneficiaries are unable to handle them, but he had lost a re-election campaign in June after he was the subject of critical articles by Mr. German.

Those articles, the first of which appeared in May in the Las Vegas Review-Journal, reported that Mr. Telles’s office had been “mired in turmoil” over employees’ claims of a hostile work environment and an “inappropriate relationship” between Mr. Telles and a staff member. Mr. German reported that employees’ jobs had become so difficult that a top supervisor, Rita Reid, had decided to campaign for Mr. Telles’s position. The next month, Ms. Reid beat Mr. Telles in the primary by less than two percentage points.

The Review-Journal reported that, shortly before he was killed, Mr. German had filed records requests for emails and text messages between Mr. Telles and other government employees and was planning a possible follow-up story. The newspaper reported that he was just beginning a weeklong vacation when he was killed.

The newspaper’s executive editor, Glenn Cook, told the newspaper that Mr. German had not reported any threats or concerns over his work. But on Saturday morning, someone called the police to say that a man was lying outside of Mr. German’s home. Emergency responders arrived to find Mr. German mortally stabbed.

Before arresting Mr. Telles, the police had released photographs of a suspect that showed a person wearing a large hat, an orange reflective vest and gloves, carrying a duffel bag. They also released a photograph of a red S.U.V. that they said might be connected to the killing, and a similar vehicle was later seen in Mr. Telles’s driveway.

Mr. Telles ignored reporters’ questions when he arrived at his home on Wednesday afternoon, hours before the police surrounded his home and arrested him.

Before taking office in 2019 as public administrator, Mr. Telles had been a probate attorney who founded his own law firm. An online biography described him as married with three children. He was listed as vice chair of the Nevada State Bar’s probate and trust law section.

Clark County officials said they were reviewing options under the law on how to fill Mr. Telles’s elected position. His access to county offices has been suspended, and employees at the administrator’s office are working from home, the county said in a statement.

Mr. German was a longtime resident of the Las Vegas area and had been a journalist for four decades, writing for both the Las Vegas Sun and then the Review-Journal, breaking news about violent crime, mob chaos and corrupt politicians. He wrote a book — “Murder in Sin City” — in 2001 about the killing of the casino magnate Ted Binion.

Mr. German’s family members said in a statement Thursday that they were shocked, saddened and angry about his death.

“Jeff was a loving and loyal brother, uncle and friend who devoted his life to his work, exposing wrongdoing in Las Vegas and beyond,” the family said. “Jeff was committed to seeking justice for others and would appreciate the hard work by local police and journalists in pursuing his killer.”

Before Mr. German’s killing, the Committee to Protect Journalists had identified eight U.S. journalists over the past 30 years who were murdered in retaliation for their work. That includes four journalists killed in 2018 when a gunman stormed into the Capital Gazette newspaper office in Maryland (a fifth person killed at the newspaper was a sales assistant).

Carlos Martinez de la Serna, program director at the C.P.J., said killings of U.S. journalists have been relatively rare compared with other nations. But he said journalists have faced increased vitriol and threats, and the violence most often affects local journalists doing reporting in their own communities.

Mr. German’s reporting on the county administrator’s office included interviews with a number of employees who recounted what appeared to be a deeply troubled workplace.

The first article, on May 16, reported that the staff member with whom Mr. Telles was said to have had a relationship was acting “beyond her assigned duties” and being inappropriately favored by Mr. Telles. In response, Mr. Telles said that “a handful of old-timers” had exaggerated the relationship and lied about how he managed his office.

Employees interviewed by Mr. German said they had been subject to bullying and that the stress of the office under Mr. Telles had begun to affect their physical health.

They told Mr. German that Mr. Telles had demeaned employees he did not like, given them extra, unnecessary assignments and held them to unreasonable standards. They also said Mr. Telles had tried “to dig up dirt on them” and prohibited them from using their cellphones at work. One assistant said she had retired after more than three decades because of the situation.

An employee filed a retaliation complaint with county officials in May.

The week after Mr. German’s first story, he wrote another article noting that Clark County officials had hired a former coroner as a consultant to help resolve tensions in the office.

The intra-office conflict continued in public view as Mr. Telles argued with people on Facebook about the allegations and, after losing the election, posted a letter on his campaign website in which he criticized the newspaper’s reporting and later tweeted at Mr. German.

Mr. German’s last article about Mr. Telles was on June 22, when he wrote that Mr. Telles had conceded that he had lost the primary election.

Mr. Cook, the executive editor, said the arrest of Mr. Telles was “at once an enormous relief and an outrage for the Review-Journal newsroom.”

Mr. Cook said that the killing of a journalist, apparently for his work, was a tragedy for Mr. German’s family, friends and colleagues and could have a broader chilling effect on the press.

“Journalists can’t do the important work our communities require if they are afraid a presentation of facts could lead to violent retribution,” he said.

Salman Khan’s awwdorable dance with niece Ayat in his arms is melting down internet....

India’s XI for Sydney Test: Where will Rohit Sharma bat? Saini or Shardul in...