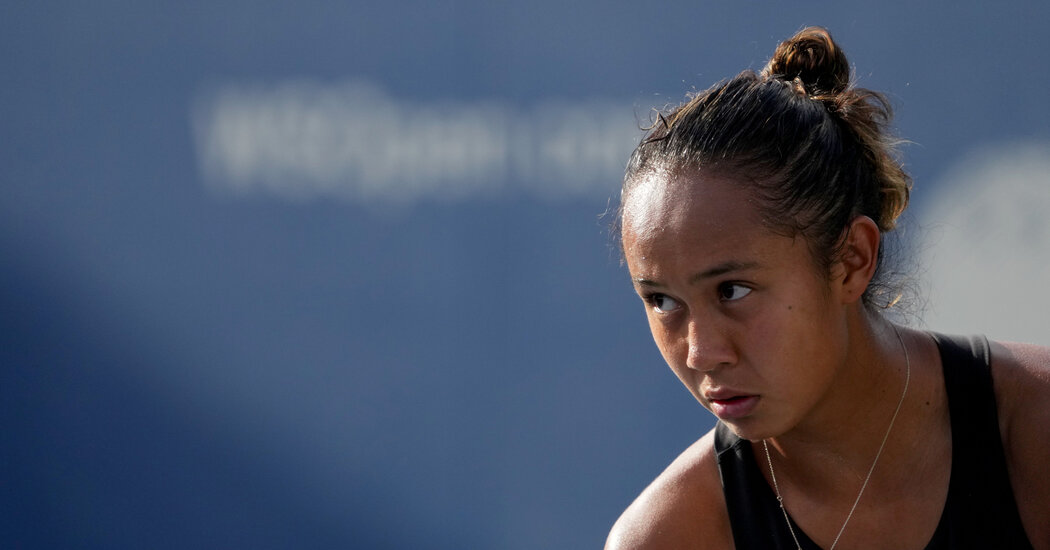 After a foot injury sidelined her for much of the summer, Fernandez returns to Flushing Meadows with high expectations.

Not long after Emma Raducanu and Leylah Fernandez stood side by side on the platform to receive their United States Open trophies last year the two teenagers found themselves together in a nearly empty locker room beneath Arthur Ashe Stadium. By chance, their lockers were located right next to each other.

“It was just crazy,” Fernandez, who lost to Raducanu, 6-4, 6-3 in the 2021 championship match, said by phone earlier this month. “We were in the locker room and we just smiled at each other, like this is incredible what we’ve done. We joked about the prize money and I told her, ‘Don’t spend it all too quickly.’ Then we just talked about our paths, how far we’ve come since playing together in the juniors. We took a few pictures together, hugged it out and went our separate ways.”

The 2021 U.S. Open marked a turning point for both Raducanu, now 19, and Fernandez, who turns 20 on Sept, 6. Last year they played the first women’s all-teenage final since a 17-year-old Serena Williams beat an 18-year-old Martina Hingis in 1999.

Until her return this month to the U.S. Open, Fernandez, who plays her opening match tonight, had not been back to Flushing Meadows since she captivated crowds last year with her explosive groundstrokes, cheetah-like court speed and alley-oop-type arm twirls that accompanied bellows of joy following big points.

“I think when I get there it’s going to be an extremely special moment,” Fernandez said. “My expectations are pretty high, like very high, and I think that’s normal for any professional player who wants to succeed. There will be some nerves, some pressure and stressful moments, but that’s part of the job.”

Much was made of Raducanu’s run to the 2021 U.S. Open title as the first qualifier to win. But it was Fernandez who had the tougher draw. Raducanu never faced a seed until the quarterfinals and then beat No. 11 Belinda Bencic and No. 17 Maria Sakkari.

Fernandez upset the No. 3 seed and defending champion, Naomi Osaka, then knocked off the former U.S. Open winner Angelique Kerber, No. 5 Elina Svitolina and No. 2 Aryna Sabalenka to reach the final.

“What surprises me most was how I was able to get back on the court the next day or two days later and produce the same level of tennis,” said Fernandez, who lives in South Florida but plays for her native Canada. “After I beat Osaka it was extremely hard to put the emotions aside and focus on the moment. It’s hard for me to comprehend how I was able to reset, refocus and basically forget what I did.”

Since last year’s Open, Fernandez has struggled to find her form. She has won consecutive matches in just four tournaments, including defending her first WTA title in Monterrey, Mexico, and reaching the quarterfinals at the French Open. All but two of her losses have come against lower-ranked players.

At the French Open, Fernandez suffered a foot injury that sidelined her much of the summer. She limped through a quarterfinal loss to Martina Trevisan, and an X-ray later showed a stress fracture in her right foot. She didn’t return to the tour until Toronto three weeks ago and has won only one match since.

Despite not being as tall as other tour players (she’s 5-foot-6), Fernandez’s feistiness carries her far.

“She has great timing and competes really well,” said the three-time major finalist and current ESPN analyst Mary Joe Fernandez, who is no relation to Leylah. “She’s not big but she packs a big punch. As a lefty, she could use her serve better, the way John McEnroe and Monica Seles did. But she doesn’t mind the pressure and really seems to relish the big moments.”

When Fernandez was younger, she was so shy that she couldn’t bring herself to approach her idol, the seven-time major champion Justine Henin, when they were seated at adjoining tables in the player dining room at the 2019 French Open. Fernandez had won the junior title.

Then, during last year’s U.S. Open, her father and coach, Jorge, told his daughter that he wanted her to be more independent and self-assured. The result was Fernandez’s on-court emotion, as well as her poignant post-final speech, delivered on the 20th anniversary of the Sept. 11 terrorist attack, in which she praised the strength and resilience of the people of New York.

“I learned over the last year that every single time I’m more outgoing, more vocal, I become more happy and a more positive person on court and off,” she said. “The whole tournament last year my Dad was basically saying, ‘Be you, be fun, be quirky, be the smiling little girl that you are.’

“So that’s what I’m trying to do and that’s what I’ve learned about myself. Every time I smile and have fun it’s the best version of myself.”

Is California Enjoying a Reprieve From Extreme Heat?

Uttarakhand disaster: Rescuers pull out 6 bodies from Tapovan tunnel, 7 from other locations;...