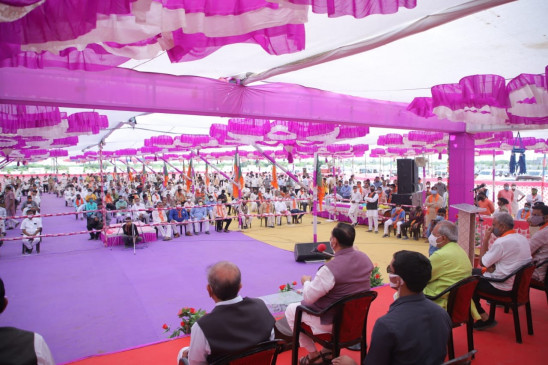 New Delhi, 23 October (IANS). In the by-election for eight assembly seats in Gujarat, BJP has said to take a clean sweep. Gujarat BJP state general secretary Bharat Singh Parmar has claimed to win eight assembly seats of all eight from IANS. Voting will be held on November 3 and counting on November 10 for eight seats in the state. The by-elections in the seats vacated by the resignation of Congress MLAs have become a question of prestige for both the main parties. This is the reason that state level leaders of BJP and Congress have given full strength in the by-elections.

Five Congress MLAs resigned in March before the Rajya Sabha elections this year. Due to the resignation of three more Congress MLAs in June, eight seats are currently being held. The BJP has placed bets on former MLAs who resigned from the Congress in five of the eight seats. What is the reason for the confidence of winning all the seats? On this question, State General Secretary Bharat Singh Parmar told IANS over phone, Prime Minister Narendra Modi and Home Minister Amit Shah are the pride of Gujarat. People of Gujarat are very much in love with both the leaders. The BJP government, both at the Center and the state, has done historic works in the public interest. The effect of which will be seen in the by-elections. The BJP is getting huge support from the public in the by-elections. Reports are coming in favor of the party from everywhere. Because of this, victory is guaranteed in every seat.

On the question of giving tickets to defectors, the BJP state general secretary said, "What should we do if the Congress cannot handle its people." In the seats where leaders from Congress have got tickets, they are getting support from the public. There is no resentment about the BJP or its candidates. BJP candidates are set to win eight of the eight seats.

Gujarat BJP state general secretary Bharat Singh Parmar told IANS, "The organizational structure of the BJP is very strong. The party has raised the team till the booth level. There is a whole team of dedicated workers. There are reports of central and state government actions. Is a development issue. In such a situation, the BJP's way to win the by-election is easy.

By-elections to be held in these seats

A ‘Girl Singer’ and Her Extra Hair Hit the Road

Joe Biden admin urged not to issue H-1B to Indians till country cap on...

Scale-up production, will give you all assistance: PM Modi informs vaccine manufacturers