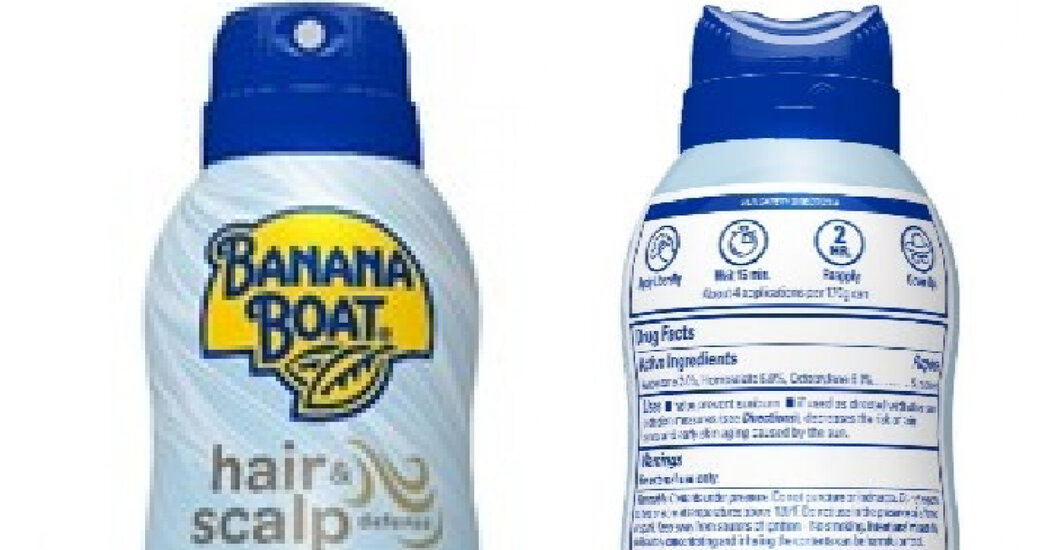 The Food and Drug Administration said consumers should immediately stop using the product if it came from any of the three batches recalled.

The parent company of Banana Boat recalled batches of a sunscreen spray because they contained trace levels of benzene, a carcinogen, the U.S. Food and Drug Administration said. Consumers were urged to stop using the products.

Edgewell Personal Care, which owns Banana Boat, issued the voluntary nationwide recall on Friday for products in three batches of SPF 30 hair and scalp sunscreen that were found to contain the carcinogen, according to the F.D.A.

“No other Banana Boat products are in the scope of this recall and may continue to be used by consumers safely and as intended,” the F.D.A. said.

Benzene is not an ingredient in any Banana Boat product, but it is part of the propellant that sprays the sunscreen out of the can, the F.D.A. said. Retailers were told to remove the products from shelves. The sunscreen had been sold online and in stores.

“Exposure to benzene can occur by inhalation, orally and through the skin,” the administration said, “and it potentially can result in cancers including leukemia and blood cancer of the bone marrow and blood disorders, which can be life-threatening.”

Low levels of benzene can be found in products such as plastics and detergents, as well as at gas stations and in the air through tobacco smoke, motor vehicle exhaust and industrial emissions, according to the Centers for Disease Control and Prevention. Benzene causes cells to work incorrectly and can damage the immune system.

“The seriousness of poisoning caused by benzene depends on the amount, route and length of time of exposure,” the C.D.C. said, “as well as the age and pre-existing medical condition of the exposed person.”

People are exposed to trace levels of benzene in their environment. No adverse effects related to the Banana Boat sunscreens have been reported, but consumers should contact their health care providers if they experience problems, according to the F.D.A.

“We know that you love our products, and we are conducting this recall out of an abundance of caution,” Banana Boat said on its website.

Similar benzene-related recalls have occurred in the past. Johnson & Johnson issued a recall for some Neutrogena and Aveeno sunscreen sprays last year after testing found low levels of benzene.

Banana Boat will offer reimbursement for buyers of these products. For more information, consumers can visit the Banana Boat website or call 1-888-686-3988.