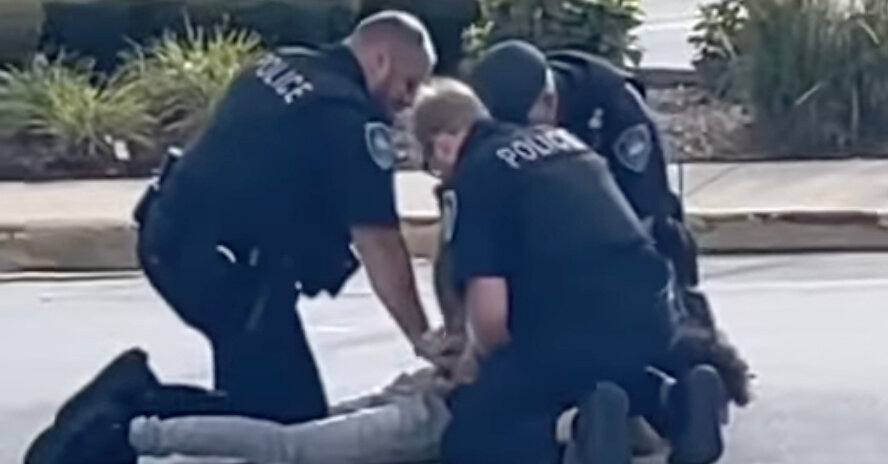 The Oak Lawn Police Department said that the boy, identified by his lawyer as 17-year-old Hadi Abuatelah, was armed with a semiautomatic handgun and ran from officers during a traffic stop.

A 17-year-old boy who was seen on video being beaten by police officers in Oak Lawn, south of Chicago, was hospitalized with a broken nose and bleeding near his brain, family representatives said on Thursday.

The Oak Lawn Police Department said that the boy, whom they did not identify, was armed with a semiautomatic handgun during the episode on Wednesday evening and ran from officers who had conducted a traffic stop. “The subject refused to listen to verbal commands, which resulted in a physical confrontation with two officers,” the department said in a statement.

The beating, under the backdrop of McDonald’s arches, was captured in a minute-long video by a bystander who could be heard saying: “Why are they beating him like this? It’s a little ol’ boy.”

It is unclear what had occurred before the video began, and part of the video is obscured by a vehicle. But two officers can be seen punching the 120-pound teenager, identified by his lawyer as Hadi Abuatelah, in the legs and face at least 10 times as he is on the ground.

Gerald Vetter, a spokesman for the Police Department, did not immediately respond to phone and email messages on Thursday. He said in a statement on Thursday that an officer was also taken to the hospital but did not specify injuries. He said that the investigation into the episode was continuing and that charges were pending.

Zaid Abdallah, the boy’s lawyer, said that Hadi was a passenger in the vehicle. The lawyer said he did not know what the traffic stop was about or why Hadi had decided to flee.

“You have him subdued,” he said. “If he broke the law, we have a process for that in America. You arrest the person. He goes to bond court. He goes to his preliminary hearing. He goes to trial court. This is the process. The process is not smash his head into the pavement.”

Mr. Abdallah said that Hadi, who is to enter his senior year of high school this year and is training to be a barber, is “not doing too well right now.”

“He’s conscious but he’s not lucid,” he said. “He’s emotionally scarred to the point where he only wants his mother and father next to him.”

The Chicago chapter of the Council on American Islamic Relations said in a statement that it wanted the Police Department to release dashboard and body camera footage from all the officers involved and conduct an internal investigation.

“Regardless of the alleged infraction that led to the arrest, the video clearly shows a restrained teenager in submission, not resisting, being brutally beaten by three officers without justification,” Ahmed Rehab, executive director of CAIR-Chicago, said in a statement. “The issue here is excessive force and police brutality. Something we are seeing again and again and again.”