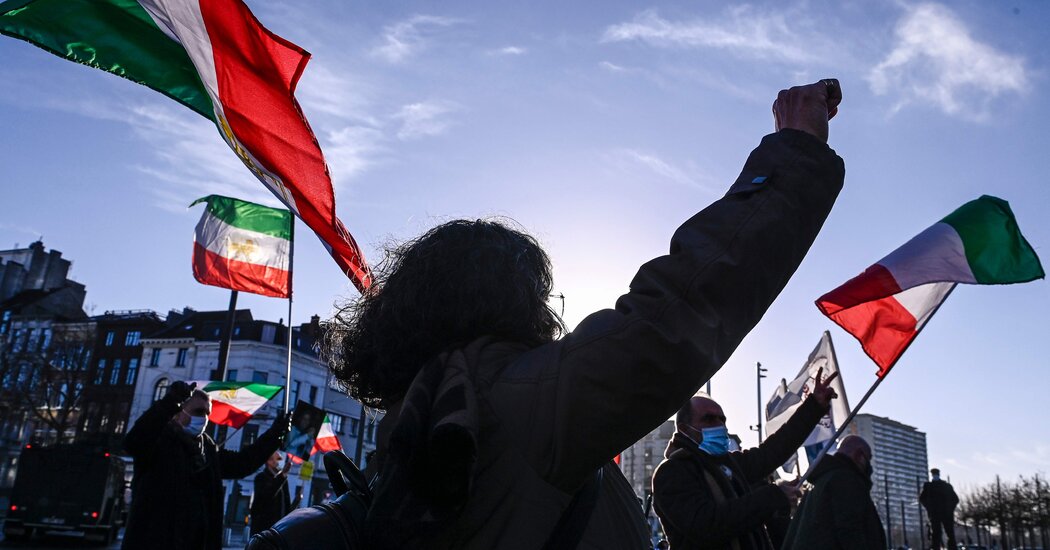 Critics say that Belgium is giving into Iranian blackmail in order to secure the release of one of its nationals in Iran and that the treaty will put more Belgians in the country in danger.

BRUSSELS — After two days of contentious debate, Belgium’s Parliament has approved a much-criticized treaty with Iran that would allow prisoner exchanges between the two countries.

Critics of the treaty, which was ratified late Wednesday by a vote of 79 to 41, with 11 abstentions, argue that Belgium is giving in to a form of hostage-taking by Iran.

In late February, the Iranian authorities detained a Belgian aid worker, Olivier Vandecasteele, 41, on charges of espionage. His arrest was not made public, but on March 11, Belgium signed the prisoner-exchange treaty with Iran that was ratified on Wednesday.

Mr. Vandecasteele worked in Iran for several nongovernmental aid organizations for five years, but left in March 2021 after losing his job. He returned in February to pick up his personal belongings, but was arrested and imprisoned on the espionage charges, which the Belgian government said were baseless.

The detention of Mr. Vandecasteele was revealed by his family only this month.

Belgium’s justice minister, Vincent Van Quickenborne, defended the treaty to legislators. “Iran is a rogue state, but we don’t choose whom we talk to,” he said, emphasizing that freeing Mr. Vandecasteele was “our priority.”

But opposition legislators, led by the New Flemish Alliance, a right-wing nationalist party, said the government was giving in to blackmail from Tehran and putting more Belgians at risk.

Prime Minister Alexander De Croo insisted that the treaty was the only way to secure the release of Mr. Vandecasteele. “Belgium does not abandon its citizens,” he said in Parliament. “What do you tell his family, that we are going to let him rot in his cell?”

Iran, critics said, was pushing to secure the return of an Iranian diplomat convicted last year in Belgium to 20 years in prison for orchestrating a plot to bomb a 2018 meeting of Iranian opposition leaders in France. If the diplomat is allowed to return to Iran, he is likely to be immediately released rather than serving out his sentence there, the critics said.

The diplomat, Assadollah Assadi, 50, was found guilty in February 2021 of organizing the plot and providing explosives to a Belgian-Iranian couple to target the annual gathering of the National Council of Resistance of Iran, which normally features prominent foreign supporters like the former F.B.I. chief Louis J. Freeh and Rudolph W. Giuliani, the former New York mayor.

Mr. Assadi, the Belgian court ruled, was working for Iranian intelligence under his diplomatic cover from Iran’s Embassy in Austria and so had no immunity in Belgium.

Iran has demanded his release, and even Mr. Van Quickenborne said to Parliament that after Mr. Assadi’s arrest, Belgium and its 200 citizens in Iran had become targets. “From Day 1, we have felt pressure from Iran, and the security situation of our interests has deteriorated systematically,” he said. But he denied any direct link between the treaty and the Assadi case.

In a statement on Thursday, the National Council of Resistance of Iran, which had lobbied hard against the treaty, condemned its ratification as “shameful.” Belgium’s vote, it said, would provide “the highest incentive for the religious fascism ruling Iran to step up terrorism and to use hostage-taking as much as possible for the release of its arrested terrorists and agents.”

The council is the political wing of the Mujahedeen Khalq, which seeks to overthrow the Islamic government of Iran.

Mr. Assadi, prosecutors said at his trial, brought about a pound of the explosive triacetone triperoxide and a detonator to Vienna from Iran in his luggage and then drove it to Luxembourg. There, he handed it over on June 30, 2018, to the Iranian-Belgian couple at a Pizza Hut. Mr. Assadi was arrested at a service station in Germany, where he did not have diplomatic immunity, as he drove back to Austria.

The couple had been granted political asylum and later citizenship in Belgium. They were arrested as they drove to Paris from Antwerp on the day of the rally. A fourth defendant was an associate of Mr. Assadi’s who was supposed to guide the couple at the rally.

Some Women Turn to Self-Managed Abortion as Access Recedes

IND vs ENG 1st Test: Reverse swing made us feel we were in game...