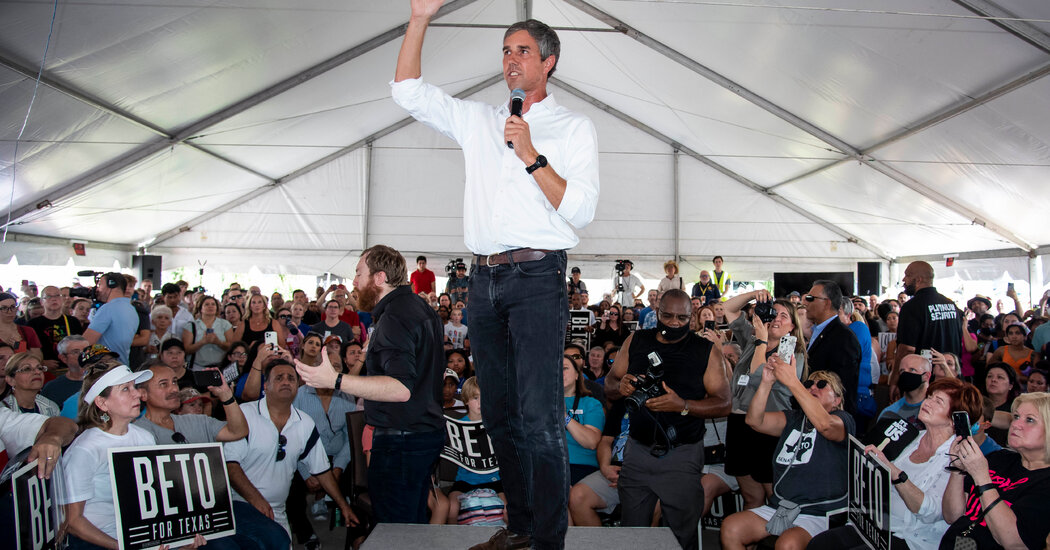 The Democrat, who is trying to unseat Republican Gov. Greg Abbott, said that although his symptoms had improved, he would be resting at home on doctors’ orders.

Beto O’Rourke, the former congressman and 2020 Democratic presidential candidate who is running to unseat Greg Abbott in the tightening race for Texas governor, said on Sunday that he would be sidelined from campaigning because of a bacterial infection.

Mr. O’Rourke, 49, said on Twitter that he had gone to Methodist Hospital, in San Antonio, after feeling ill on Friday.

“While my symptoms have improved, I will be resting at home in El Paso in accordance with the doctors’ recommendations,” he said. “I am sorry to have had to postpone events because of this, but promise to be back on the road with you as soon as I am able.”

Mr. O’Rourke on Friday postponed a weekend of campaign stops in the Coastal Bend region of Texas after falling ill and had also left early from a book signing in San Antonio that afternoon, according to The Caller Times, a newspaper in Corpus Christi. A campaign spokesman said that Mr. O’Rourke did not have Covid-19 and did not provide more details, the newspaper reported.

In his statement on Sunday, Mr. O’Rourke did not say when he expected to be back on the trail.

His uphill candidacy, an attempt to wrest the Texas governor’s mansion from Republican control for the first time since Ann Richards’s underdog win in 1990, has relied heavily on traveling the state and meeting Republican voters, even inviting protesters to his events.

“I can’t win this with Democrats alone,” Mr. O’Rourke said in a recent interview with The New York Times after an event in Texarkana.

A poll earlier this month from The Dallas Morning News and the University of Texas at Tyler found that Mr. Abbott, who is seeking his third term, was leading Mr. O’Rourke by 7 percentage points.