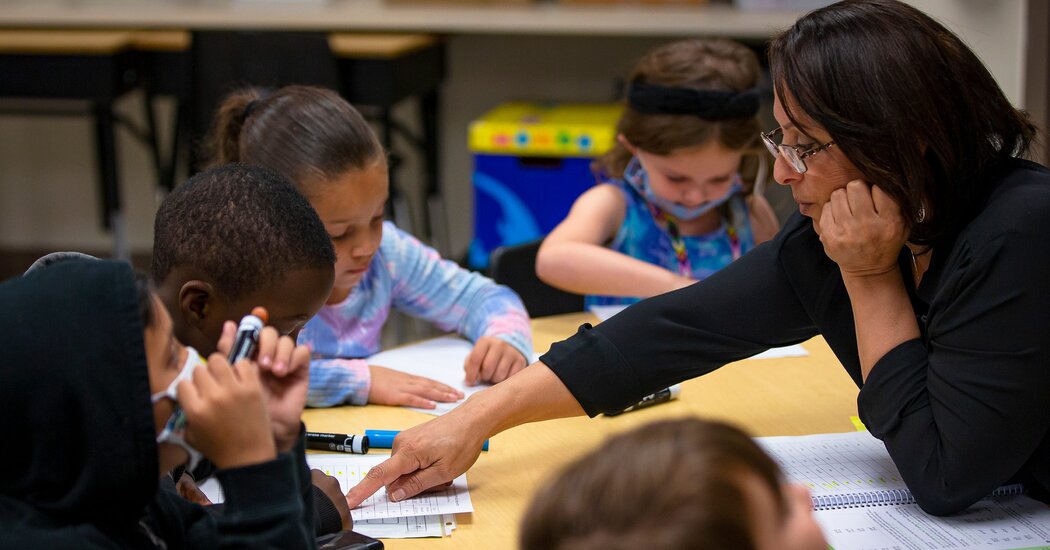 Treasury disbursed $2.1 billion in pandemic aid after warning it could be withheld because the state had used aid money to undercut school mask mandates.

WASHINGTON — The Biden administration backed off its threat to withhold pandemic aid money from Arizona after accusing the state earlier this year of misusing the funds to undercut school mask mandates.

A spokesman for Arizona Gov. Doug Ducey, a Republican, confirmed that the state had received its second payment of about $2.1 billion last month.

The retreat comes amid renewed focus on the $1.9 trillion relief package that Democrats passed last year, which has been blamed for helping fuel rapid inflation and prompted concerns about whether some of the money had been misused.

Arizona was awarded $4.2 billion as part of its share of the $350 billion slated for states and cities to help replace revenue that had been lost during the pandemic, support health initiatives and invest in water, sewer and broadband infrastructure projects. Arizona got its first $2.1 billion installment in 2021 but the Treasury Department, concerned that the state was using the funds to undermine public health efforts, warned Arizona officials that it might recoup $173 million that it had previously awarded or hold back the second tranche of funds.

Dayanara Ramirez, a Treasury spokeswoman, declined to explain why the funds had been released after the department threatened to withhold them.

“Treasury does not comment on matters in its compliance process,” Ms. Ramirez said.

Treasury said that the funds were disbursed through the standard process that the Office of Recovery Programs has established to make second-tranche payments.

The dispute over the funds began after Arizona’s Republican-controlled legislature banned school mask mandates in 2021, but some school districts imposed them anyway. Last August, Mr. Ducey announced that he was rolling out two education programs intended to undercut such requirements.

One of the programs, which received $163 million in federal funds, provided up to $1,800 in additional funding per pupil in public and charter schools that were in compliance with “all state laws” and open for in-person instruction. Schools that required masks would not be eligible.

A separate $10 million program funded vouchers worth up to $7,000 to help poor families leave districts that require face coverings or impose other Covid-related “constraints.”

Treasury first warned Arizona about its use of the funds last October, saying they were undermining the law and public health guidance. In January, Treasury threatened to begin the process of recouping funds if the programs were not redesigned within 60 days. Treasury also warned in January that it might not release the second payment because it believed Arizona had misused some of the first installment of what are known as state and local fiscal recovery funds (SLFRF).

“Treasury may also withhold funds from the State of Arizona’s second tranche installment of SLFRF funds until Treasury receives information that confirms that the issues described above have been adequately addressed,” wrote Kathleen B. Victorino, an official in Treasury’s Office of Recovery Programs.

But Arizona moved ahead with the programs anyway and Mr. Ducey sued the Biden administration to block any efforts to claw back pandemic relief money.

“The Biden administration is attempting to hold congressionally appropriated funds hostage and is trying to bully Arizona into complying with this power-grabbing move,” Mr. Ducey said at the time.

The Biden administration has asked for the case to be dismissed. In a May legal filing, Department of Justice lawyers argued that Mr. Ducey did not have the right to sue because the Treasury Department had not actually tried to claw back the money.

“Treasury has not initiated any enforcement proceedings to recoup misused funds from Arizona, so there is no imminent injury,” they wrote, adding that Treasury’s letters are not final agency actions.

Attorneys representing Arizona did not respond to requests for comment about their next steps in the lawsuit.

Understand Inflation and How It Impacts You

The Arizona case is one of several obstacles that the Treasury Department has faced in disbursing and overseeing the recovery fund.

A $4 billion debt relief program for Black and other “socially disadvantaged” farmers that was part of the relief legislation has been frozen following lawsuits from groups of white farmers who questioned whether the government could offer debt relief based on race.

A Treasury Department rule that states cannot use pandemic relief money to subsidize tax cuts has also been stuck in the legal system after several states filed lawsuits arguing that the rule violated their sovereignty. Four states have been granted injunctions blocking the Treasury Department from enforcing the regulation.

Many other states have found workarounds and about three dozen have enacted tax cuts this year, thanks in part to surpluses that have been inflated by relief money.

The Biden administration continues to deploy money from the American Rescue Plan more than a year after it was signed into law. On Thursday the Treasury Department announced that it was awarding more than $350 million to Kansas, Maine, Maryland, and Minnesota from a capital projects fund to expand access to broadband.

With Mr. Biden’s social safety net and climate spending proposals still stalled in Congress, the Biden administration has been encouraging states and cities to use their pandemic relief money to invest in housing and work force development initiatives, which would further the administration’s equity agenda.

However, despite the large amount of stimulus money Treasury is overseeing, the department itself is running short on funds to manage some of the programs. It is seeking permission to redirect administrative money from other programs so that it will have more resources to oversee the state and local funds.

“While the state and local funds have enormous long-term potential to improve equity, Treasury faces a shortfall for funds to administer this program — which is why we have urged Congress to take action that would address this issue and support the continued success of these programs,” Wally Adeyemo, the deputy Treasury secretary, said at an event sponsored by the Urban Institute this week.