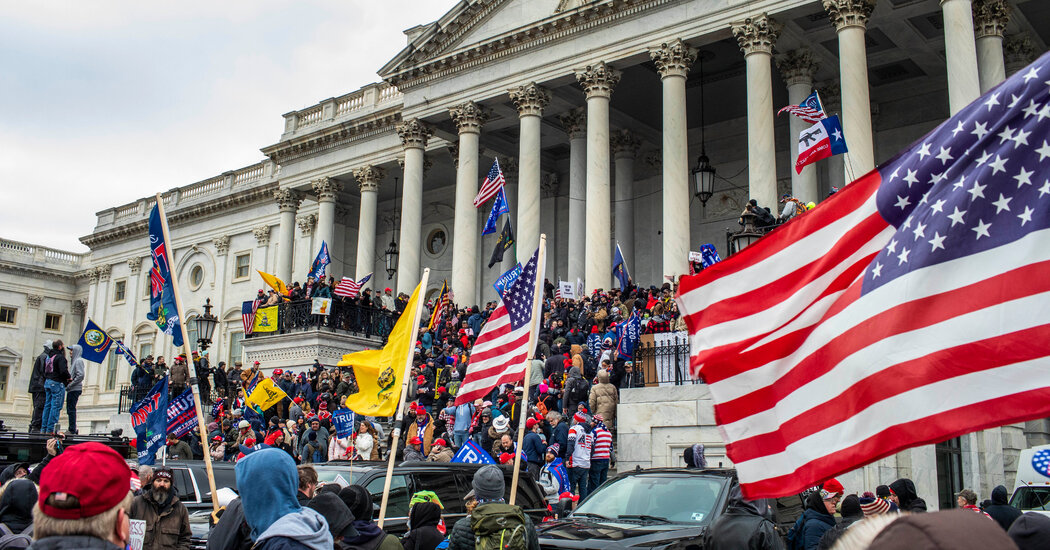 In rare comments on the investigation unfolding in the House, President Biden said his predecessor sat in the comfort of the White House as his supporters stormed the Capitol.

WASHINGTON — President Biden on Monday denounced former President Donald J. Trump’s refusal to decisively intervene to stop the Jan. 6, 2021, attack on the Capitol, declaring that his predecessor “lacked the courage to act” and betrayed the police officers he claimed to support.

Mr. Biden, who has largely avoided discussing the former president or the Jan. 6 investigation by a House select committee,weighed in during a statement to an organization representing Black law enforcement leaders.

The president’s comments came just four days after the House committee wrapped up its string of summer hearings with a prime-time meeting outlining Mr. Trump’s inaction as the mob of his supporters stormed the Capitol in an effort to stop the counting of the Electoral College vote sealing his re-election defeat. Mr. Trump did not call his vice president, his defense secretary, his military chief, his attorney general, his homeland security secretary or anyone else to dispatch help to the Capitol that day.

Instead, testimony showed, Mr. Trump spent the afternoon watching the violence unfold on Fox News and resisting aides who kept imploring him to take action. A call from a Pentagon official to coordinate a response initially went unanswered because “the president didn’t want anything done,” according to a White House lawyer whose account was presented during the hearing. The tweets and video he ultimately did issue did not condemn the attack and in some cases seemed to add fuel to the fire.

Mr. Trump and his allies have no role in the committee’s proceedings because Representative Kevin McCarthy of California, the House Republican leader, opted against appointing anyone to the panel after Speaker Nancy Pelosi rejected a couple of his initial choices. The president has not otherwise rebutted the account of his refusal to act that day.

But his political action committee did post an article on Monday recalling a Pentagon inspector general report last November noting that Mr. Trump told his defense secretary three days before Jan. 6 that there would be many protesters coming and he should ensure there was enough security to make it a safe event.

As the hearings have played out, Mr. Biden has mostly not commented, much less addressed Mr. Trump by name, focusing instead on his own agenda. But some Democrats have been disappointed that he has been so quiet on the matter.

Mr. Biden seemed not at all reticent in Monday’s remarks to the National Organization of Black Law Enforcement Executives, delivered from a lectern with the presidential seal and with an American flag behind him.

“On Jan. 6, we relied on law enforcement to save our democracy,” the president said. “We saw what happened. The Capitol Police, the D.C. Metropolitan Police, other law enforcement agencies were attacked and assaulted before our very eyes. Speared, sprayed, stomped on, brutalized. Lives were lost. And for three hours, the defeated former president of the United States watched it all happen as he sat in the comfort of the private dining room next to the Oval Office.”

“While he was doing that,” Mr. Biden added, “brave law enforcement officers were subject to the medieval hell for three hours, dripping in blood, surrounded by carnage, face to face with a crazed mob that believed the lies of the defeated president.”

From Ahan Shetty to Arjun Kanungo, here are most anticipated newcomers who are set...