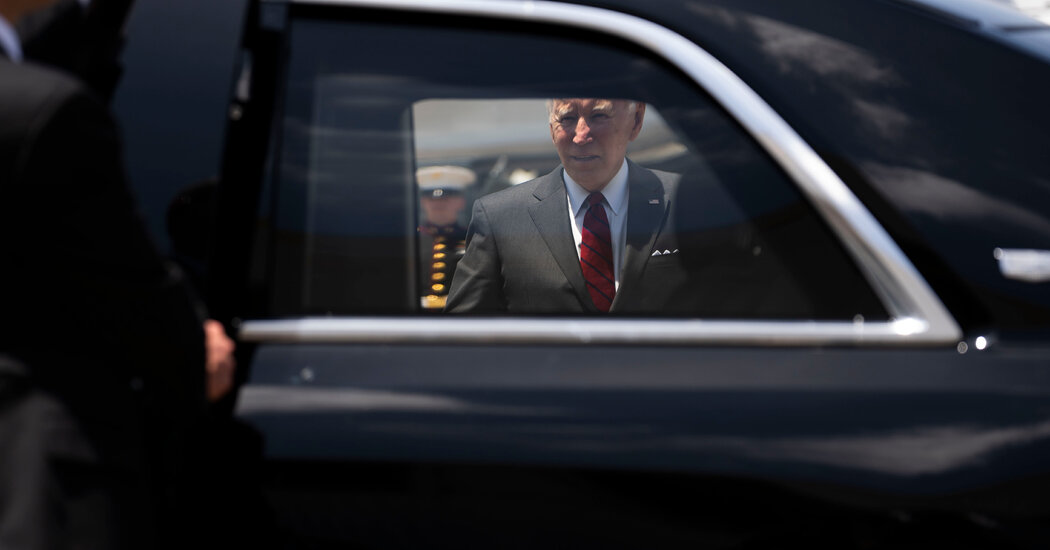 With the midterm elections around the corner, the challenge for President Biden is to make sure his latest successes resonate with Americans who remain deeply skeptical about the future.

WASHINGTON — President Biden and his top advisers have tried for months to press forward amid a seemingly endless drumbeat of dispiriting news: rising inflation, high gas prices, a crumbling agenda, a dangerously slowing economy and a plummeting approval rating, even among Democrats.

But Mr. Biden has finally caught a series of breaks. Gas prices, which peaked above $5 a gallon, have fallen every day for more than six weeks and are now closer to $4. After a yearlong debate, Democrats and Republicans in Congress passed legislation this past week to invest $280 billion in areas like semiconductor manufacturing and scientific research to bolster competition with China.

And in a surprise turnabout, Senator Joe Manchin III of West Virginia, a Democrat who had single-handedly held up Mr. Biden’s boldest proposals, agreed to a deal that puts the president in a position to make good on promises to lower drug prices, confront climate change and make corporations pay higher taxes.

“The work of the government can be slow and frustrating and sometimes even infuriating,” Mr. Biden said at the White House on Thursday, reflecting the impatience and anger among his allies and the weariness of his own staff. “Then the hard work of hours and days and months from people who refuse to give up pays off. History is made. Lives are changed.”

Even for a president who has become used to the highs and lows of governing, it was a moment to feel whipsawed. Since taking office 18 months ago, Mr. Biden has celebrated successes like passage of the $1.9 trillion stimulus bill and slogged through crises like the chaotic withdrawal from Afghanistan. Gas prices soared; now they are coming down. Unemployment is at record lows even as there are signs of a looming recession.

The president’s brand of politics is rooted in a slower era, before Twitter, and sometimes it can pay off to have the patience to wait for a deal to finally emerge. But now, with congressional elections coming up in a few months, the challenge for Mr. Biden is to make sure his latest successes resonate with Americans who remain deeply skeptical about the future.

The magnitude of the Senate deal was received like a splash of icy water across Washington, which had all but written off the possibility that Mr. Biden’s far-reaching ambitions could be revived this year. Republicans moved quickly to attack the proposal, with Senator Mitch McConnell of Kentucky, the Republican leader, deriding what he described as “giant tax hikes that will hammer workers.”

Inside the West Wing, aides were forced to scramble to come up with talking points for a deal almost no one saw coming. If Democrats manage to pass the compromise reached with Mr. Manchin, they argue, it will move the country to the forefront on addressing the globe’s changing climate and lower drug prices even as it raises money from corporations to lower the federal budget deficit.

If the deal wins congressional approval, it will give Medicare the power to negotiate lower prices for millions of Americans, extend health care subsidies under the Affordable Care Act for three years and require corporations to pay a minimum tax — something many progressive Democrats have been demanding for years.

“For months, the environmental community, President Joe Biden and Leader Chuck Schumer, and economists have pointed out that climate action would reduce inflation and lower energy costs for Americans,” Melinda Pierce, the legislative director for the Sierra Club, said in a statement hours after the deal was announced. “We’re glad the Senate is recognizing the opportunity they have before them. Climate action cannot wait one day longer.”

The elections this fall will determine which party controls the House and the Senate, with many experts predicting a Democratic drubbing. And doubts about the president’s own future are rising as fast as his popularity is sinking. A New York Times/Siena College poll conducted in early July found that 64 percent of Democrats wanted someone other than Mr. Biden to be the party’s nominee in 2024. A CNN poll later in the month put that figure at 75 percent among Democratic and Democratic-leaning voters.

And even as Mr. Biden hailed the news of the Senate deal on Thursday, his own comments underscored the darker reality that he and his administration still face — a litany of promises that remain unfulfilled, with little evidence that more surprise victories are on the horizon.

During his remarks, the president himself listed many of the parts of his 2020 campaign agenda that remain stalled: more affordable child care; help for the elderly and those who care for them; cheaper preschool; efforts to confront the cost of housing; student debt relief and tuition-free community college; and money to cover health care for the poor in states that have refused to expand Medicaid.

The president’s failure to make good on those promises has left many people who were once his most ardent supporters disappointed, angry and — in some cases — even ready to abandon him for someone else.

Alexis Steenberg, 19, a college student in eastern Pennsylvania, helped convince her father to vote for Mr. Biden in 2020 because of his promise to wipe away thousands of dollars in student debt. Now, as one of those debt-ridden college students, she is angry that Mr. Biden has not made good on that promise.

“It’s so frustrating because I tried, I put my all into persuading my dad to vote for someone that I knew he wouldn’t on his own,” she said in an interview. “And the reason I persuaded him, it fell through entirely.”

Ms. Steenberg is a Democrat and supports Mr. Biden’s priorities, she said, but she wants to vote for a different candidate.

“I am one of the 75 percent that thinks somebody else should run,” she said. “Not only because he’s been failing his promises, but also because he doesn’t seem like he can articulate his thoughts enough to the public nor the people behind the scenes that are helping him out.”

Mr. Biden, she said, is “just floating along waiting for the term to end.”

In the future, aides believe Mr. Biden must find a way to better communicate the progress he has made to people like Ms. Steenberg.

The stimulus plan he pushed through at the beginning of his term distributed hundreds of billions of dollars to individuals and businesses in the midst of the pandemic. His $1 trillion bipartisan infrastructure law is making huge investments in clean energy, broadband and long-delayed projects to fix crumbling roads, pipes and bridges.

David Axelrod, who was a top adviser to President Barack Obama, wrote on Twitter on Friday that Mr. Biden was “the victim of his own expansive expectation- setting.”

Still, Mr. Biden has so far struggled to ensure that his victories break through the often grim reports that dominate news coverage. Critics, including some members of his own party, say his speaking style fails to convey the sense of urgency that many Americans feel.

“I think we’re looking to be inspired,” said Jamie L. Manson, the president of Catholics for Choice, who was disappointed after Mr. Biden’s speech following the Supreme Court’s decision to overturn Roe v. Wade.

Dakota Hall, the executive director of the Alliance for Youth Action, which advocates on behalf of young people and people of color, said Mr. Biden had failed to live up to the promises he made on the campaign trail for bold change in a number of areas.

“That is absolutely necessary,” he said. “But that is not the change that people went out and voted for.”

“They want somebody who’s going to show their anger, to slam their fist onto the podium and say enough is enough,” Mr. Hall added. “They don’t get that from Biden, right?”

White House officials are aware of the frustration, but they say it is misplaced. They say the president has been fighting for all of his priorities but has been blocked by forces outside of his control: Republicans who refuse to compromise, a handful of conservative Democrats and global events like Russia’s invasion of Ukraine and the economic fallout from the pandemic.

They argue that Mr. Biden’s accomplishments are sometimes not appreciated. They point to the crush of negative news coverage that he received as gas prices were rising rapidly and the comparatively smaller amount of coverage as gas prices have fallen after his decision to release a record amount of oil from the nation’s Strategic Petroleum Reserve.

Derrick Johnson, the president of the N.A.A.C.P., said Democrats should direct their ire at lawmakers — including Republicans and a few Democrats — who have prevented the president from making more progress. He urged people to vote in November to elect more people who support Mr. Biden’s agenda.

“We need a Senate that’s going to do their job,” he said.

On Twitter this past week, former President Barack Obama, who was often frustrated by Congress as he pushed his own agenda, said change could be halting.

“I’m grateful to President Biden and those in Congress — Democrat or Republican — who are working to deliver for the American people,” Mr. Obama wrote. “Progress doesn’t always happen all at once, but it does happen — and this is what it looks like.”

Jan. 6 Committee Plans to Issue a Subpoena to Trump

Search engines, Fb Fined within Russian federation regarding Not being able in order to...