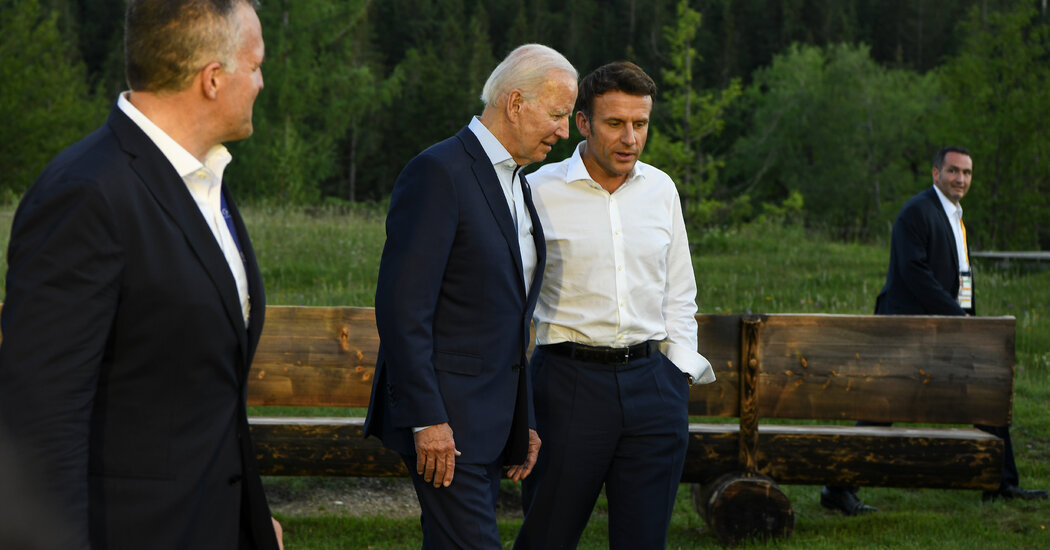 The president’s “Made in America” plan has drawn accusations of protectionism from Europe as the United States tries to keep its Western allies aligned against Russia.

Mr. Le Maire made clear that France, a key U.S. ally, viewed the policy as a protectionist move that would benefit the United States at the expense of his nation’s economy and its car industry. He was not alone in his concerns.

President Biden’s “Made in America” plan has fueled anger across Europe at a critical moment, as the United States tries to keep its Western allies aligned against Russia’s war in Ukraine. Allies who are critical to supporting Mr. Biden in that fight are increasingly accusing the United States of undercutting them at the expense of domestic priorities.

Those frustrations have clouded what had been a trans-Atlantic effort to starve President Vladimir V. Putin of oil revenues needed to fuel his war in Ukraine. A looming European ban on Russian oil prompted the Biden administration to push for a workaround that would allow critical supplies of it to continue flowing in order to prevent a spike in global oil prices. European officials reluctantly agreed earlier this year to embrace a U.S. plan that would impose a cap on how much Russia could earn for each barrel it sells.

But determining that price has divided the European Union, leaving the issue in limbo just days before the embargo is set to take effect. A U.S. official on Wednesday pushed back against the rock-bottom price cap proposals that some European nations have been pitching and argued that a cap that falls between $60 and $70 a barrel would represent a meaningful reduction in Russian revenues. The Group of 7 nations is expected to finalize a cap on the price of Russian oil ahead of a Dec. 5 ban by the European Union.

Frustration with the United States has been building since this summer, when Mr. Biden signed two bills aimed at giving a leg up to American industry. The Inflation Reduction Act, a sprawling climate and energy law, offers incentives to support America’s electric vehicle industry and the CHIPS Act contains $52 billion in subsidies and tax credits for any global chip manufacturer that chooses to set up new operations or expand existing ones in the United States. In particular, European officials view the Inflation Reduction Act as putting their domestic companies at a disadvantage.

Addressing those concerns and understanding the intent of the law is important “so that we keep very strong ties between France, Europe and the United States,” Mr. Le Maire told Ms. Yellen ahead of last month’s Group of 20 leaders meeting in Bali.

The brewing trans-Atlantic fight is expected to be a central topic of discussion on Thursday, when President Emmanuel Macron of France arrives at the White House for a visit that includes the first state dinner of Mr. Biden’s presidency.

Much of the Europeans’ concern centers on the “Made in America” approach that provides preferential subsidies for electric vehicles that were assembled in the United States and use battery components that are made in North America.

“I think that we can fully understand the determination of the American government to defend their economic interest and promote greener technologies,” Mr. Le Maire told reporters on the sidelines of the Group of 20 meetings in November. “But it should not have negative side effects on their European allies and the European economy.”

Mr. Biden is expected to attempt to ease France’s concerns on Thursday when he meets with Mr. Macron. But it is not clear that the Inflation Reduction Act can be altered in a way to calm the backlash. Top American officials have defended the policy, arguing that incentives to encourage domestic battery production are a matter of economic security that will ultimately benefit allies of the United States.

“It is reasonably friendly,” Ms. Yellen said of the legislation during The New York Times’s DealBook Summit on Wednesday. “We’re highly dependent on China for most of the minerals that go into making batteries, and the objective of the Inflation Reduction Act is to have more adequate supply chains among our friends, our trading partners.”

John Podesta, a senior White House adviser on clean energy innovation and implementation, said this week that the United States is confident that the Inflation Reduction Act does not violate any World Trade Organization rules.

“We intend upon implementing these provisions and look forward to dialogue,” Mr. Podesta added. “But we think that not only will these be drivers in the U.S. economy, but ultimately these are going to have tremendous benefits across the globe as we drive down the price of clean energy and clean energy technology.”

The debate over electric vehicle subsidies will be one of the most divisive issues on the agenda as the American and European governments hold their latest set of economic meetings through a framework called the Trade and Technology Council, beginning Dec. 5 in Washington.

The United States and the European Union set up a task force in October to discuss their split over the electric vehicle provision. European officials have been pressing the United States to make some kind of change to the law to ensure that European manufacturers can share in the same benefits awarded to producers in Canada and Mexico, whose products also qualify for the tax credit.

European business executives say they would have preferred if those conversations had been held before the law was passed.

Markus J. Beyrer, the director general of BusinessEurope, a group representing companies in 35 European countries, said Europeans were disappointed with the policy, “which is discriminating against European production in a very important field without this having been talked about in the T.T.C.”

“We have a joint responsibility to find a solution to not allow this issue to poison the relationship,” he said.

Administration officials have encouraged European leaders to join the United States in passing more measures to boost their advanced manufacturing production, as part of a concerted fight against China.

Officials “think there is space here for Europe and others, frankly, to take similar steps,” a senior administration official told reporters this week in a background briefing previewing Mr. Macron’s visit. The task force, the official said, allowed for conversations with Europe “to make sure that their approach and our approach ends up complementing one another, being harmonized with one another.”

In its discussions with the Europeans, the Biden administration has focused on the other benefits of the new climate legislation for global businesses, and on emphasizing the need for cooperation to combat climate change, people familiar with the discussions said.

Privately, American officials have also pointed to recent situations in which the Europeans took protectionist trade stances that rankled the other countries — such as the E.U.’s carbon border adjustment mechanism, or a proposed digital tax.

The Europeans are “much more protectionist and restrictive than the U.S.,” said Clyde Prestowitz, a labor economist and former trade negotiator for the United States. “There is just no comparison.”

The split over the automotive industry comes as the United States is also seeking Europe’s help on limiting the kinds of advanced technology that China can access globally, especially the machinery for producing advanced semiconductors that is marketed globally by Dutch firm ASML.

Senior U.S. officials have flown to Europe in recent weeks to press E.U. officials and corporate leaders to join the United States in tightly restricting exports of semiconductor technology to China, arguing that China’s access to such technology poses a national security threat.

At her meeting with Mr. Le Maire at the Group of 20 summit in Bali last month, Ms. Yellen noted that America’s relationship with France is critical at such a pivotal time for the global economy. She said that she was open to hearing the concerns that Europeans have about the Inflation Reduction Act and trying to address them, if possible, within the limits of the law that Congress passed.

“France is America’s oldest friend and ally, and we’re looking forward to continuing to build on our very strong relationship,” Ms. Yellen said.

Were You Fooled? Chrishell Stause Reveals Truth About Her Brunette Hair at 2021 People’s...

India to focus on meeting domestic demand of Covid-19 vaccine, no expansion of exports...