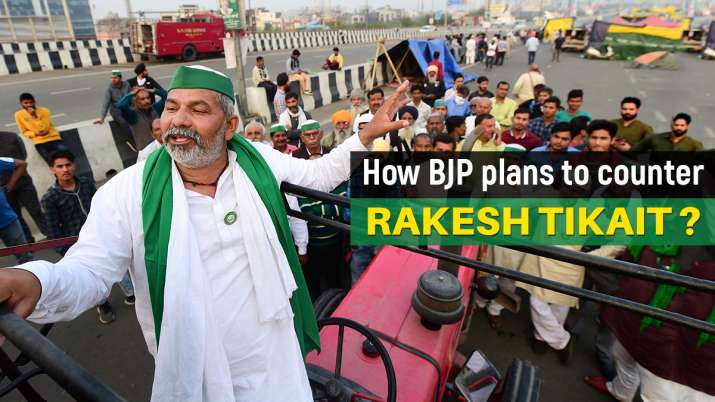 On the pretext of the farmers’ agitation, the opposition is trying to make inroads among the Jat community who have a strong influence in 50 Assembly seats in western Uttar Pradesh. The ruling Bharatiya Janata Party (BJP) has become wary of the opposition’s attempts and plans to field Union Minister Sanjeev Balyan and other Jat leaders to counter the opposition, said sources.

The BJP has decided to field all its Jat leaders and has been cautious since the Bharatiya Kisan Union (BKU) leader Rakesh Tikait got teary-eyed and has tried to convert the farmers’ agitation into a fight for self-respect of the Jats.

Union Minister Sanjeev Balyan would now lead the public outreach (Jan Sampark) campaign of the BJP, interacting with the Jat community in western UP. The interesting thing is that BJP’s Sanjeev Balyan belongs to the same ‘Jat Khap’ as Rakesh Tikait.

READ more...  Didi, put your foot over my head and kick me but not Bengal's development: PM Modi in Bankura | Top points

BJP’s National Vice-President Saudan Singh on Wednesday held a meeting of all the Jat leaders of western UP at the residence of Sanjeev Balyan. It was said in this meeting that on the pretext of the farmers’ agitation, the opposition is busy in furthering its political interests. The Jats have been voting for the BJP in western Uttar Pradesh for the last several elections and now the opposition is mobilizing the Jats against the saffron party on the pretext of the farmers’ agitation.

In this situation, the BJP going upfront among the Jats has to clarify that neither the new farm laws are against the farmers nor the party is against the interests of the farmers. In all the ‘Khaps’ of western UP, the BJP will conduct public outreach campaigns by holding panchayats. The meeting was attended by Uttar Pradesh co-incharge of the BJP and the party’s National Secretary Satya Kumar, Uttar Pradesh co-organization minister Karmaveer and all prominent legislators of western UP.

According to sources, it was also discussed in the meeting that Rakesh Tikait is trying to become the face of Jats through panchayats held at several places so the BJP leaders would have to think about this issue.

A BJP leader who was part of the meeting told IANS, “Union Home Minister Amit Shah and BJP President J.P. Nadda held a meeting on Tuesday night to warn party leaders about the conspiracies hatched by the opposition on the pretext of the farmers’ agitation. In today’s meeting, a comprehensive public outreach strategy has been chalked out among the Jats of western UP. All BJP MPs, MLAs and Ministers would intensify public outreach campaigns. The Jats and farmers would be explained the benefits of the new farm laws.”