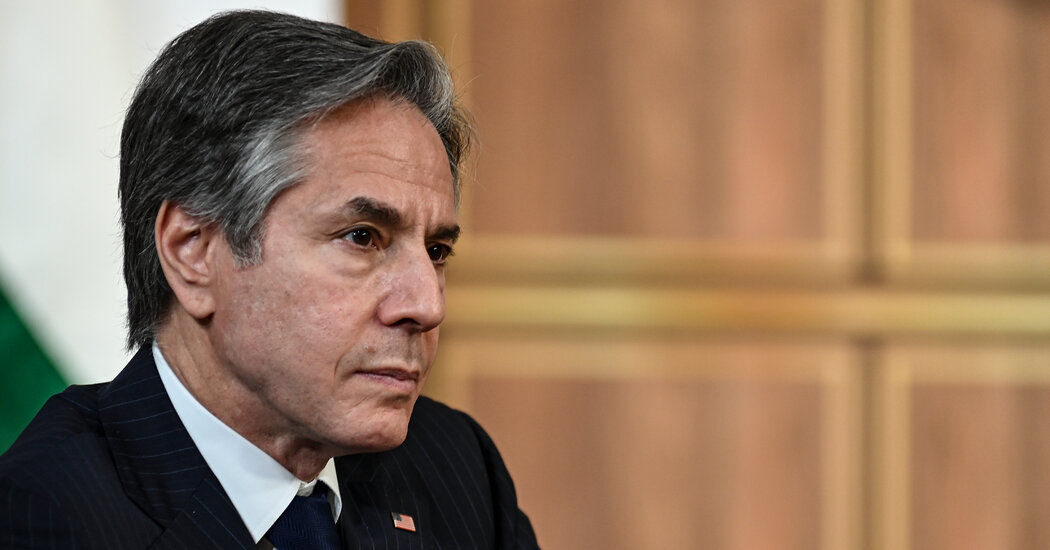 The Biden administration is wary of making the designation despite strong calls from Congress and pleas from Ukraine.

WASHINGTON — The U.S. Senate supports it unanimously. So does House Speaker Nancy Pelosi, along with Ukraine’s president, Volodymyr Zelensky, and the Ukrainian Parliament.

But Secretary of State Antony J. Blinken is not so sure.

For weeks, pressure has mounted on Mr. Blinken to formally declare Russia a state sponsor of terrorism, a label currently reserved for North Korea, Syria, Cuba and Iran. But despite the emotional appeal, Mr. Blinken is resisting a move that could force him to sanction U.S. allies that do business with Russia and might snuff out the remaining vestiges of diplomacy between Washington and Moscow.

Amid outrage over Russia’s brutal military campaign in Ukraine, the U.S. Senate on Wednesday unanimously approved a nonbinding resolution calling on Mr. Blinken to designate Russia as a terrorism sponsor for its attacks in Ukraine, as well as in Chechnya, Georgia and Syria, that resulted “in the deaths of countless innocent men, women and children.”

“To me, Putin is now sitting on top of a state terrorist apparatus,” Senator Lindsey Graham, Republican of South Carolina and a co-sponsor of the resolution, told reporters after the vote. He said the sanctions that had already been imposed on Russia “have been effective, but we need to do more.”

This month, Mr. Graham and Senator Richard Blumenthal, Democrat of Connecticut, visited Mr. Zelensky in Kyiv and presented him with a framed copy of their resolution.

But Mr. Blinken responded noncommittally when asked about the issue on Thursday, echoing other State Department and White House officials. Any decision must be based on existing legal definitions, he said, while also suggesting that the point was moot because Russia was already under many sanctions.

“The costs that have been imposed on Russia by us and by other countries are absolutely in line with the consequences that would follow from designation as a state sponsor of terrorism,” Mr. Blinken said at a news conference. “So the practical effects of what we’re doing are the same.”

Mr. Blinken’s hand may be forced, however. While the Senate resolution was merely a call to action with no legal force, a group of House Democrats on Thursday filed a new measure which, if passed by Congress and signed into law, would end-run the State Department and add Russia to the U.S. terror sponsor list.

A State Department finding that Russia is a state sponsor of terror — a label that agency officials refer to as the “nuclear option” — would result in more sanctions on Russia’s battered economy, including penalties on countries that do business with Moscow. It would also waive traditional legal barriers that prevent private citizens from suing foreign governments for damages, potentially including the families of American volunteers killed or injured while fighting Russia in Ukraine.

And it could rupture, once and for all, the Biden administration’s limited diplomatic links with Moscow, analysts say, which Mr. Blinken called important to keep intact.

In a reminder of that dynamic, Mr. Blinken spoke to his Russian counterpart, Sergey V. Lavrov, by phone on Thursday and pressed him to accept a proposal for the release of two Americans, Brittney Griner and Paul N. Whelan, but he reported no breakthrough. It was their first conversation since Russia invaded Ukraine.

Over the course of the war, Mr. Zelensky has openly called for the terrorism designation, speaking last month of “the urgent need to enshrine it legally.” The House is gearing up for a vote on a resolution similar to the Senate’s version, with Ms. Pelosi’s strong support.

The disagreement between the Biden administration and Congress over the label echoes debates from the start of the Ukraine war, when the first evidence of atrocities emerged. When leaders of Congress, including Ms. Pelosi, accused Russia’s military of committing war crimes, Mr. Blinken was cautious, citing legal criteria and the need for evidence and investigation. But on March 16, President Biden superseded that position by declaring Mr. Putin “a war criminal.”

Mr. Biden’s rhetorical declaration infuriated the Kremlin, but it had no policy implications. That would not be the case with an official terrorism designation.

A senior U.S. official, speaking on the condition of anonymity to discuss policy deliberations, expressed concern that such a measure would limit the administration’s ability to exempt some transactions with Russia from Western penalties. The official did not specify the activities, but the United States has, for instance, taken care to ensure that Russian food exports are not affected by trade sanctions.

The secretary of state has wide latitude to impose various designations on other countries or groups, legal experts say. But the department prefers to wield the designations only under specific circumstances.

According to the State Department, the terrorism designation results in restrictions on U.S. foreign assistance, limits on some exports of “dual use” technology items that might have military applications and a ban on defense exports and sales.

Much of that is covered by existing sanctions. But the finding could force the United States to go further, Mr. Graham said on Wednesday, by adding new restrictions to how third-party countries could interact with Russia without fear of American penalties.

“It means that doing business with Russia, with that designation, gets to be exceedingly hard,” Mr. Graham said.

Experts said that the diplomatic cost of such a move could be significant and that Mr. Putin might expel all American diplomats from the country. So far, Moscow has allowed the U.S. Embassy in Moscow to remain open and for some diplomats to stay, including Ambassador John J. Sullivan.

Even during the Ukraine war, the United States wants to continue working with Russia on some issues, including the international talks with Iran over restoring a 2015 nuclear agreement to which Moscow was a party and from which President Donald J. Trump withdrew.

“For diplomacy, it’s not practical to designate a state with which the U.S. has a multifaceted relationship,” said Brian Finucane, a senior adviser at the International Crisis Group who recently worked on military and counterterrorism issues at the State Department.

Some supporters of the designation would not mind further isolating Russia, however.

“The designation of state sponsorship of terrorism puts Russia in a very small club,” Mr. Blumenthal said on Wednesday. “It consists of nations like Syria, Iran, Cuba, that are outside the bounds of civilized countries. They are pariahs.”

American officials have so far employed the label mainly in cases where a nation or its proxy has committed a narrowly targeted, nonmilitary act, such as bombing a civilian airliner.

“U.S. officials want to make a clear delineation between terrorism and the type of conflict where the U.S. military might engage in combat operations,” Mr. Finucane said.

In 2019, Trump officials debated a proposal to impose the “foreign terrorist organization” label on a part of the Iranian military, the Islamic Revolutionary Guard Corps. Pentagon officials opposed the move, wary of creating a precedent that might invite other countries to impose a similar designation on the United States because of the actions of the American military.

President Trump overruled that objection. As part of negotiations to restore a nuclear agreement, Iran has demanded that the Biden administration scrap the label, but Mr. Biden has refused.

Once announced, a terrorist designation is often perceived by U.S. officials to be politically risky to repeal, even in a new administration with different views. In one of his final acts in the Trump administration, Secretary of State Mike Pompeo labeled Cuba a “state sponsor of terrorism,” a step that the Biden administration has yet to reverse, despite skepticism about its justification. (Mr. Trump did remove Sudan from the terror sponsor list as part of a 2020 deal to normalize its relations with Israel.)

Mr. Trump also designated North Korea as a terror sponsor in 2017, even though President George W. Bush lifted the label in 2008.

Daniel L. Byman, a senior fellow at the Center for Middle East Policy at the Brookings Institution, wrote at the time that the United States approach toward state sponsorship of terrorism “has many flaws.” Among them, he said, was the fact that some obvious candidates, including Pakistan — which Washington sees as a partner but whose intelligence services have ties to the Taliban and to anti-Indian terrorist groups — somehow evaded the label.

In Libyan Town Searching for Justice, a Struggle Even to Find Graves