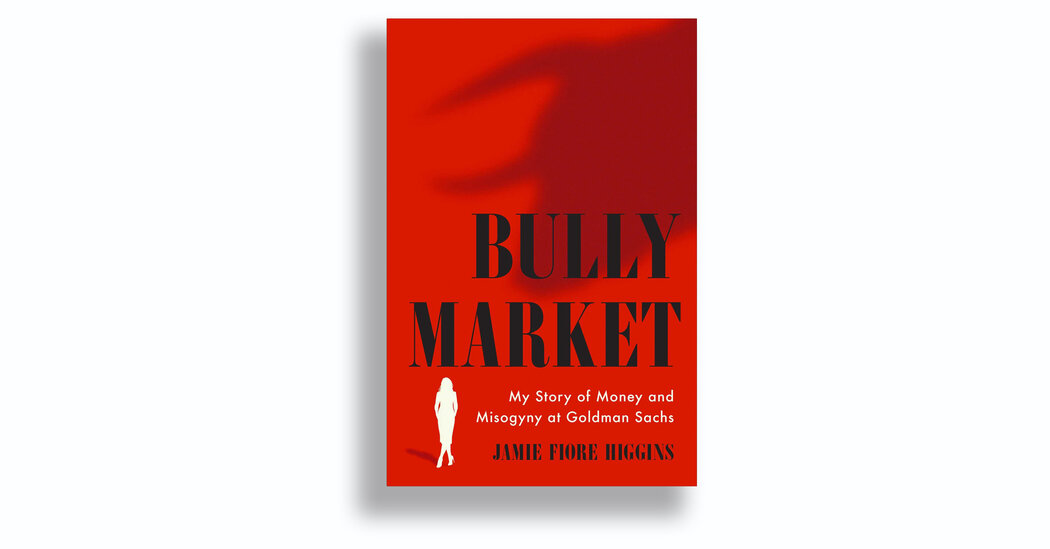 BULLY MARKET: My Story of Money and Misogyny at Goldman Sachs, by Jamie Fiore Higgins

“Do What You Love, the Money Will Follow” is the title of a popular, rainbow-covered self-help book published in 1988. “Bully Market,” the new memoir by Jamie Fiore Higgins, a former Goldman Sachs managing director, is clad in unambiguous blood red, suggesting rather that if you do what you hate, the money will chase you down a dark alleyway and throttle you. Maybe eventually it will release you to self-awareness, but not without first inducing temporary blindness.

The daughter of Italian immigrants to New Jersey, Higgins had life-threatening spinal scoliosis as a child, an experience that, as for Judy Blume’s Deenie, helped shape her personality. One mean girl in sixth grade called her “a disgusting freak” for the back braces she wore, along with an imaginary “cloak of defectiveness.” Expensive surgeries left Jamie feeling guilty and beholden to her parents, who discouraged her from pursuing low-paying social work. They wanted a return on their investment.

A naysaying physical therapist, meanwhile, made her determined to surpass low expectations. She ran varsity track and cross-country in high school, majored in math at Bryn Mawr and was recruited by a diamond-draped female partner at Goldman, one of the world’s foremost financial firms, with the motto “Minds. Wide. Open.”More like “Eyes Wide Shut,” it turned out— crosscut with outtakes from “Wall Street,” “Working Girl” and a soupçon of “Mr. Mom.”

Her beefs notwithstanding, Higgins worked at Goldman from 1998 to 2016. But the place is depicted as if suspended in ’80s amber. (Either way, we are definitely in pre-#MeToo corporate America.) “Here I was cramming for my pitch, and they were having sex,” she writes in astonishment of discovering two colleagues in flagrante one night on the floor of the computer lab. A male subordinate, taken off an account after having an affair with a client, angrily grabs Higgins, pins her against a wall, and sprays her with epithets and spit. There is cocaine in the office bathroom, an elaborate Christmas party with bacon-wrapped scallops and hundred-dollar tumblers of Macallan Scotch, and a steady, bruising fusillade of crude jokes.

Nicknamed “Sister Jamie” and compared to Mother Teresa for her workplace demeanor, even Higgins — married early to an independent I.T. consultant, Dan, and mother to their young children — eventually finds herself writhing and moaning like a Judith Krantz heroine in the back of a car with an older executive she calls Rich. (Many names have been changed, she writes in an author’s note, and some of these characters are composites.)

She has also acquired a like-minded work husband, Pete, who dreams of chucking it all to be a guidance counselor. Together they create a “Spreadsheet of Freedom,” charting how long they have to clock in before they can check out of a lucrative but utterly brutal business. This trio of male allies — Dan, Rich, Pete — in a field of cash-sloshing jerks give “Bully Market” a perhaps unintentional rom-com suspense: Three coins in the fountain, which one will the fountain bless?

Higgins seems to have been an excellent and resourceful financial analyst, cultivating regional banks to lend stocks to hedge funders (when her grandmother, who had taught her to save every bit of small change, learns the amount of her first bonus, she drops a crochet needle). As a writer, she is less sophisticated, with a weakness for the easy simile. During an important licensing exam, her stomach is “like a rock”; a sleazy colleague grins “like a dog that had seen a bone”; when she first meets Dan and he asks what she does for a living, her “joyful mood was extinguished like a bucket of water on a fire.”

After Higgins is traumatized by a close-up view of the 9/11 terrorist attack from Goldman’s offices, Dan comforts her on a couch “like he was a human vest thrown out to rescue me.” She hears a plea for help from one of their toddlers “cutting through the room like a razor”; a hoped-for promotion instead “pulled me down like quicksand”; and Rich’s hazel peepers “locked on me like lasers.”

If you were to take a shot of tequila for every one of these clichés, you’d be — well, as drunk as Higgins and her co-workers got on a stunningly regular basis. (Goldman Sachs has disputed her characterization of the company’s excesses and refused to respond to “anonymized allegations.”) One of these benders, at a Chicago karaoke bar, ends with a particularly frattish colleague hurling racist and homophobic slurs at a stranger; when Higgins tries to report the incident to Employee Relations, she writes, she’s chastised for “going ‘outside the family.’” After returning from maternity leave with her actual family, she’s harassed for using on-site lactation facilities by mooing deskmates who present her with a pink gift bag containing a stuffed cow.

Higgins is unafraid to, as they say, “go there,” taking us into the bathroom and elsewhere for spilled breast milk, rivulets of child diarrhea and vomiting episodes courtesy of her sister, her children, herself. Indeed there is something effluvial about the entire book, as if the #MeToo movement provided her, narratively speaking, with a stiff dose of ipecac syrup. It’s gross, but propulsive, and also — in the case of a graphic miscarriage during her ferry commute, to which her boss displays a stunning but all-too-believable indifference — brave and poignant.

At a time when many white-collar workers are lobbying for the right to keep Zooming in sweatpants, “Bully Market” is a reminder of when offices were stage sets in the sky for dark, outrageous human drama.

What Happened to Hu Jintao?