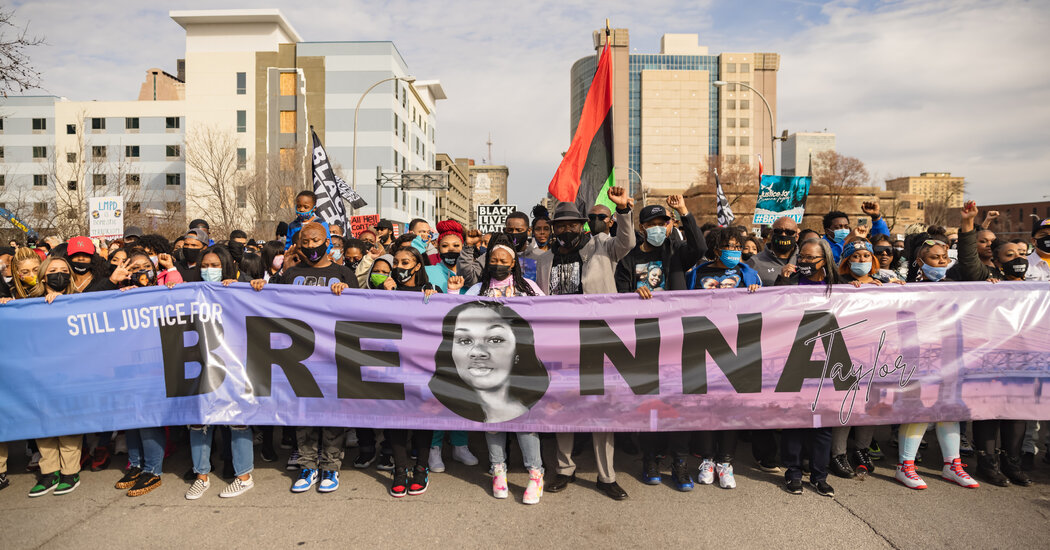 When warrants are based on misstated evidence or outright lies, the consequences can be disastrous. Prosecutors say that’s what happened in Ms. Taylor’s case.

On the day before police officers shot and killed Breonna Taylor in her apartment in Louisville, Ky., a detective tried to persuade a judge that a former boyfriend of Ms. Taylor’s could be using her home to stash money and drugs.

The detective, Joshua Jaynes, said the former boyfriend had been having packages sent to Ms. Taylor’s apartment, and he even claimed to have proof: a postal inspector who had confirmed the shipments. Mr. Jaynes outlined all this in an affidavit and asked a judge for a no-knock warrant so that officers could barge into Ms. Taylor’s home late at night before drug dealers had a chance to flush evidence or flee. The judge signed off on the warrant.

But this week, federal prosecutors said Detective Jaynes had lied. It was never clear whether the former boyfriend was receiving packages at Ms. Taylor’s home. And Mr. Jaynes, the prosecutors said, had never confirmed as much with any postal inspector. As outrage over Ms. Taylor’s death grew, prosecutors said in new criminal charges filed in federal court, Mr. Jaynes met with another detective in his garage and agreed on a story to tell the F.B.I. and their own colleagues to cover up the false and misleading statements the police had made to justify the raid.

Amid protests over Ms. Taylor’s killing, much of the attention has focused on whether the two officers who shot her would be charged. But the Justice Department turned most of its attention on the officers who obtained the search warrant, highlighting the problems that can occur when searches are authorized by judges based on facts the police may have exaggerated or even concocted.

“It happens far more often than people think,” said Joseph C. Patituce, a defense lawyer and former prosecutor in Ohio. “We are talking about a document that allows police to come into the homes of people, oftentimes minorities, at all times of night and day.”

Ms. Taylor is far from the first person to die in a law enforcement operation authorized on what prosecutors said were police misstatements.

In Houston, prosecutors accused a police officer of falsely claiming that an informant had purchased heroin from a home in order to obtain a search warrant in 2019; officers killed two people who lived there during a shootout when they tried to execute the warrant, and only after that did the police chief at the time, Art Acevedo, say there were “material untruths or lies” in an affidavit for the warrant that led to the raid. The officer pleaded not guilty and the case is still pending.

In Atlanta, police officers barged into a home and fatally shot a 92-year-old woman, Kathryn Johnston, in 2006 after an officer lied in a search warrant affidavit about an informant buying drugs from her home.

And in Baltimore, a federal judge sentenced a detective to two and a half years in prison last month after prosecutors said he had lied in a search warrant affidavit about finding drugs in a man’s truck in order to justify a search of the man’s motel room.

Judges often rely solely on the sworn narrative of police officers who apply for warrants, meaning the police can carry out potentially dangerous searches targeting innocent people before their affidavits are ever challenged.

The Supreme Court has ruled that when the police knowingly or recklessly include false statements in search warrant affidavits in cases where there would otherwise be insufficient cause, any evidence recovered cannot be admitted in court. False statements often come to light if arrests are made, as defense lawyers challenge search warrants in court.

A number of deficient affidavits may never be closely scrutinized, legal analysts say, because defendants have agreed to plead guilty for other reasons.

In Louisville, Thomas Clay, a lawyer connected to the Breonna Taylor case, knows the issue from both sides.

Mr. Clay and a colleague, David Ward, once represented Susan Jean King, an amputee with one leg and a slight build who was accused of fatally shooting a former boyfriend at her home and then throwing his body into a river.

“This was his theory,” Mr. Ward said of the detective who took on the investigation as a cold case some eight years after the killing. “It was physically impossible for her to commit the homicide, drag his body out of her home and into her nonexistent car, and then take this large, 189-pound man and toss his body over a bridge and into the Kentucky River.”

Ms. King’s lawyers claimed that the detective falsely implied in at least one of the search warrant affidavits that a .22-caliber bullet found in the floor of Ms. King’s home was one of the rounds that killed the man.

But it had already been established that the man died of .22-caliber bullets that lodged in his head without exiting, Ms. King’s lawyers noted, and they argued that the detective’s assertion was implausible. A judge agreed, saying that the detective had omitted exculpatory evidence from his search warrant affidavits.

Nonetheless, Ms. King entered an Alford plea to second-degree manslaughter — in which she pleaded guilty while maintaining her innocence — and was serving more than five years in prison when another man admitted to the killing. She was ultimately exonerated.

In 2020, the state agreed to pay Ms. King a $750,000 settlement for malicious prosecution. Through his lawyer at the time, the detective, who had retired from the force by then, denied any wrongdoing.

“Search warrants are always fair game to be scrutinized and they should be scrutinized,” Mr. Clay said, though he declined to discuss Mr. Jaynes’s case.

Mr. Jaynes pleaded not guilty to the federal charges on Thursday and has said that he was relying in part on information from another officer when he prepared the affidavit.

Officers who provide false information under oath when preparing search warrant affidavits may take short cuts, Mr. Clay said, because they believe they already know the outcome of the case but do not yet have enough evidence to support the warrant.

“The most extreme example is when they are just dishonest, even though they are under oath,” Mr. Clay said.

Ed Davis, the former Boston police commissioner, said the consequences of lying on a search warrant could be severe.

“It’s tragic when you see police falsify information to obtain a search warrant, and it is also dumb,” Mr. Davis said. “Every one of those search warrants can turn into a disaster.”

In Ms. Taylor’s case, the prosecutors said that another detective, Kelly Goodlett, whom the department moved to fire on Thursday, had also added misleading information to the affidavit, saying that Ms. Taylor’s former boyfriend had recently used her address as his “current home address.” Prosecutors charged Detective Goodlett with conspiring with Mr. Jaynes to falsify the warrant.

Mr. Jaynes has admitted that he did not personally verify the information about the packages with a postal inspector. He has said he was told by a sergeant about the packages, and believed that was enough to back up his claims in the affidavit.

“I had no reason to lie in this case,” he told a police board in Louisville that was considering his firing last year.

In the federal indictment against Mr. Jaynes, however, prosecutors charged that this claim, too, was false, and that the sergeant had actually told Mr. Jaynes twice that he did not know about any packages being sent to Ms. Taylor’s home for her former boyfriend.

The judge who signed off on the warrant for Ms. Taylor’s apartment, Judge Mary Shaw, declined to comment through an assistant on Friday, noting that she could be called to testify in the criminal case against the officers. Judge Shaw is up for re-election in November, and The Louisville Courier Journal reported that she was the only one of 17 incumbent Jefferson Circuit Court judges to face a challenger for her seat.

Vaccine hesitancy levels down to 23%