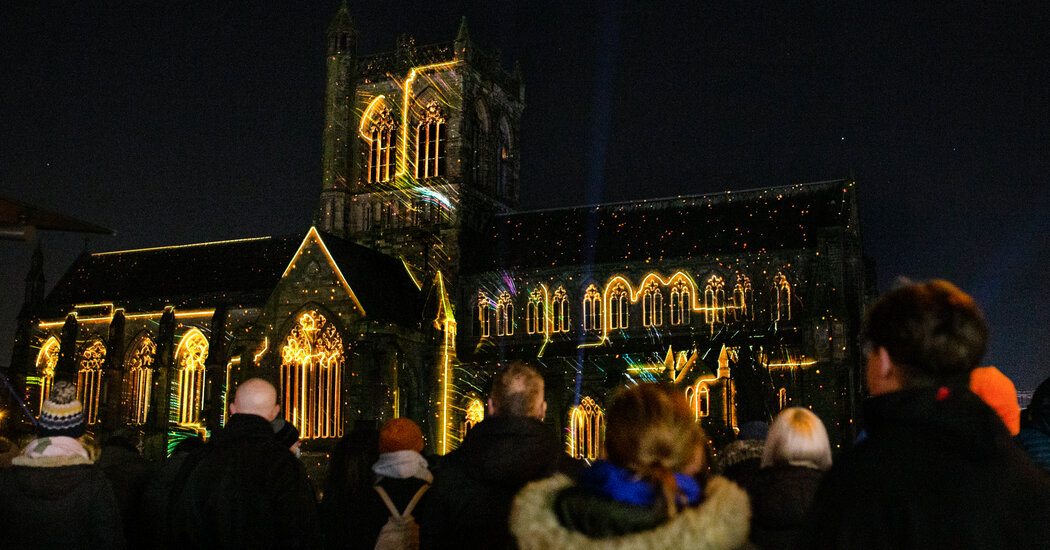 The festival, a series of exhibitions officially called “Unboxed: Creativity in the U.K.,” came to be known as the “Festival of Brexit.” It cost 120 million pounds.

LONDON — It was meant to display the best of British creativity in the era after Britons voted to leave the European Union. But a series of ambitious government-funded cultural exhibitions, which became known unofficially as the “Festival of Brexit,” is now being investigated as a “waste of money” by the government’s public spending watchdog.

This follows reports that the festival — costing 120 million pounds, or $132 million, in taxpayer funds and officially named “Unboxed: Creativity in the U.K.” — has attracted just 238,000 visitors since it opened in March. Organizers had projected it could draw up to 66 million people in the period from March to November, when the festival ends.

The chairman of Parliament’s digital, culture, media and sport committee, Julian Knight, who called for the investigation, said in a letter to the National Audit Office that the festival was an “excessive waste of money during a cost of living crisis.” He ridiculed the event, plans for which were unveiled in 2018 by Prime Minister Theresa May, as an “ethereal idea” in comments made to the BBC.

“Serious questions need to be answered about the aims and delivery of the project,” Mr. Knight said in a statement, “and how it has been allowed to squander such a vast sum of taxpayers’ money.”

The exhibition’s organizers defended the expenditure, claiming the attendance figures published in the British news media “misrepresent the public engagement with ‘Unboxed.’” The organizers said the publicized figures reflected only some of the more 100 “Unboxed” locations.

“We were given two key challenges when we first set out the project: We were told to bring people together, and we were told to celebrate creativity,” Phil Batty, executive director of “Unboxed,” said in an interview with The New York Times. For the 10 centerpiece exhibitions, he added, “We went out and collected 10 amazing teams of artists, scientists, engineers, technicians and mathematicians.”

The festival, inspired by the Great Exhibition of 1851, was intended to showcase “what makes our country great today,” as Mrs. May put it. By mounting projects that would bridge the fields of art, science and technology, its promoters hoped the festival would revive communities and show off a confident, prosperous Britain a decade after the 2012 London Olympics.

But it quickly proved a tough sell. Originally titled “Festival UK 22,” the event became well known in the British media as the “Festival of Brexit” before getting its current name. But, Mr. Batty said, “It was never the festival of Brexit — that’s a name this project has never been called formally.”

The exhibition and its perceived ties to Brexit attracted close public scrutiny during its early planning: Josie Long, a comedian, withdrew from one project after being asked on social media why she was involved in an event tied to Brexit, shorthand for Britain’s polarizing departure from the European Union.

Still, other prominent artists signed up, including Jon Hopkins, a Grammy-nominated electronic musician; Dr. Nelly Ben Hayoun, an artist and filmmaker who founded NASA’s International Space Orchestra; and Assemble, a group of architects who won the 2015 Turner Prize, a prestigious arts award.

While many of the artists and others involved were openly anti-Brexit, their involvement did not change public perceptions of the festival. Organizers said the early backlash left a negative impression, limiting the potential for success.

The festival will end next month in Wales with “Galwad,” a “multiplatform, multilingual story set in a possible future world of 2052.”

Of the 10 biggest projects, politicians have been most critical of “See Monster” in Weston-super-Mare, a seaside resort in Somerset, in southwest England. The 450-ton decommissioned North Sea offshore gas platform was reimagined to “inspire global conversations about reuse, renewables and the great British weather,” according to the “Unboxed” website.

Opened to the public in September, the rig features a cloud machine, a series of kinetic sculptures and a garden lab on its top floor. A 10-meter-high waterfall is designed to symbolize the monster’s “roar.”

“See Monster” has had its share of teething problems. The lush grasses on the architect’s rendering did not quite translate in reality, and photographs of the newly opened installation were mocked on social media. Given its sheer size and temporary use — it will be removed at the end of the year — many criticized it as a particular waste of public funds.

Despite the artistic criticism, “See Monster” has been a hit with some local residents.

Samantha Cable, 43, manager of the Beach Hotel overlooking the “See Monster,” said lines for the attraction had been getting longer and that her children were begging to be taken. “They’ve never seen anything like it. It took a while, but it looks fantastic now it’s up and running,” she said.

The Jewish Deli: An American Tale Told in Pickles and Pastrami