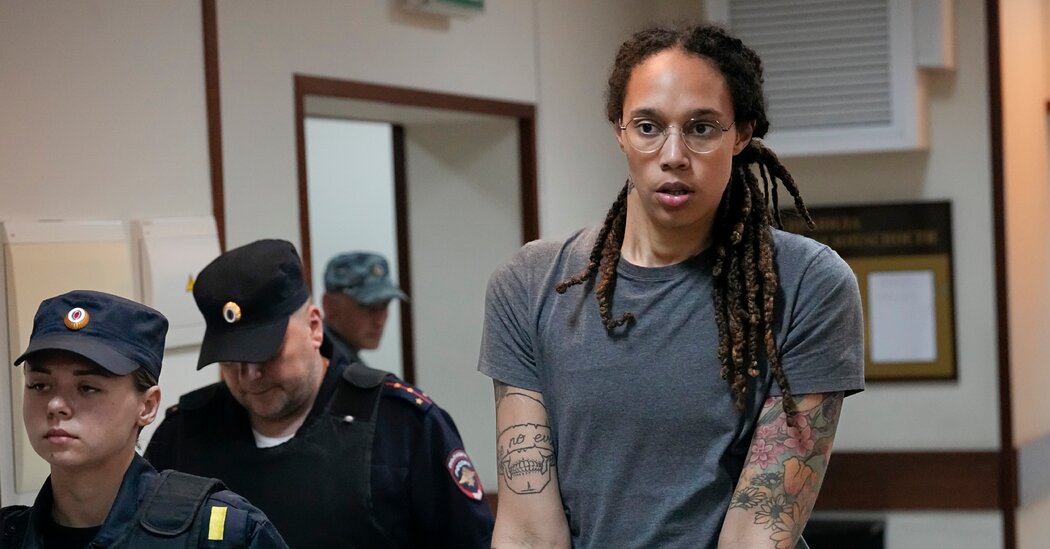 The U.S. basketball star, detained for more than eight months so far, is being transferred to an undisclosed prison in Russia, her lawyers said. The United States denounced the move.

Wherever Brittney Griner was on Wednesday, one thing was clear: The American basketball star imprisoned by Russia was not heading back home, despite a concerted U.S. campaign to win her freedom.

Ms. Griner was instead being transferred from a jail outside Moscow and thrust into Russia’s vast and opaque penal colony system, lawyers said.

Beyond that, little was known.

Ms. Griner’s legal team said in a statement that her intended destination was unknown and that it expected to be officially notified, along with the U.S. Embassy, once she had arrived. The process can take up to two weeks.

It has been more than eight months since the W.N.B.A. star was seized after she flew into an airport near Moscow with a small amount of hash oil in her luggage. She has apologized repeatedly for what she says was an unintentional act, and pleaded guilty to the charges.

Late last month, a Russian court upheld the nine-year prison sentence imposed on Ms. Griner, 32, setting the stage for her transfer to a penal colony, even as American and Russian officials broached the possibility of a prisoner exchange. Those negotiations came at a low point in relations between the two countries.

What to Know About the Brittney Griner Case

What are the possible outcomes? Experts say that her best hope for release is a prisoner swap with a Russian citizen being held by the United States, and Secretary of State Antony J. Blinken has stated that the United States had put forward a proposal to that effect in talks with Russia. On Aug. 5, top diplomats of the two nations said that their governments were ready to negotiate for the release of both the basketball star and Paul N. Whelan, who is also imprisoned by Russia.

The sentence imposed on Ms. Griner, an All-Star center with the Phoenix Mercury and a two-time Olympic gold medalist, was harsher than those ordinarily imposed for the drug infraction, experts say, and critics say Moscow is using her as a political pawn. Her arrest came just days before Russia invaded Ukraine.

American officials have repeatedly denounced the treatment of Ms. Griner, and they did so again on Wednesday.

Secretary of State Antony J. Blinken, in a statement, called Ms. Griner’s transfer to a penal colony “another injustice layered on her ongoing unjust and wrongful detention.” And President Biden directed his administration to “prevail on her Russian captors to improve her treatment and the conditions she may be forced to endure in a penal colony,” the White House press secretary, Karine Jean-Pierre, said in her own statement.

Ms. Jean-Pierre said the United States was “unwavering in its commitment to its work on behalf of Brittney and other Americans detained in Russia,” including Paul Whelan, a former Marine who in 2020 was sentenced to 16 years in a high-security Russian prison on espionage charges.

Russian and American officials have signaled that Ms. Griner’s fate may be decided during high-level negotiations over a potential exchange for Russian inmates held in the United States. But those talks could not begin in earnest until the legal process was completed, Russia officials said.

That is now the case, but for the moment, Ms. Griner’s whereabouts is likely to be shrouded in mystery.

President Biden said in a news conference on Wednesday that he hoped the negotiations could enter a new phase, now that the midterm elections were over. “My guess is, my hope is, that now that the election is over, that Mr. Putin will be able to discuss with us and be willing to talk more seriously about a prisoner exchange,” he said, referring to President Vladimir V. Putin of Russia.

Drawn-out transfers to a penal colony are a longtime practice in Russia, as they were in the Soviet Union before it. The process is known as staging.

Prisoners are typically not allowed to communicate with the outside world for a week or two while they are moved, and lawyers and family members do not know where they are going, learning in which penal colony the sentence will be served only once a prisoner arrives.

“As we work through this very difficult phase of not knowing exactly where B.G. is or how she is doing,” Lindsay Kagawa Colas, Ms. Griner’s agent, said in a statement, “we ask for the public’s support in continuing to write letters and express their love and care for her.”

The W.N.B.A. players’ union, the Women’s National Basketball Players Association, responded to the penal colony news by saying: “We stand with Brittney Griner and will continue to call on all Americans and the global sports community to do the same with even more vigilance. We are crushed that this scary, seemingly never-ending nightmare continues. The lack of clarity and transparency in the process compounds the pain.”

Penal colonies are notorious for abusive treatment of inmates, overcrowding and harsh conditions. Political prisoners like Aleksei A. Navalny and members of the Russian punk band Pussy Riot have previously been sent to them to serve sentences.

At any given time, there are usually around 350 foreigners from what the Russians call “far abroad,” meaning countries that were not part of the Soviet Union, serving sentences in penal colonies, prison officials have said. Usually, about a third are jailed on drug charges, they said.

Asked whether foreigners are treated any differently, a senior official with Russia’s Federal Penitentiary Service said some years ago that they were not. The only difference is that they have a right to visits from consular officials from their home country, the official, Sergey Esipov, was quoted as telling the RIA Novosti news agency.

“There are no special conditions,” he said. “All foreigners serve their sentences on the grounds and in the manner prescribed by Russian law.”

Kyoto Wants You Back, but It Has Some Polite Suggestions

Sequel of ‘Sarfarosh 2’ will be dedicated to CRPF personnel: Director John Mathew Matthan

At least 82 die in Baghdad Covid hospital fire: inside Ministry