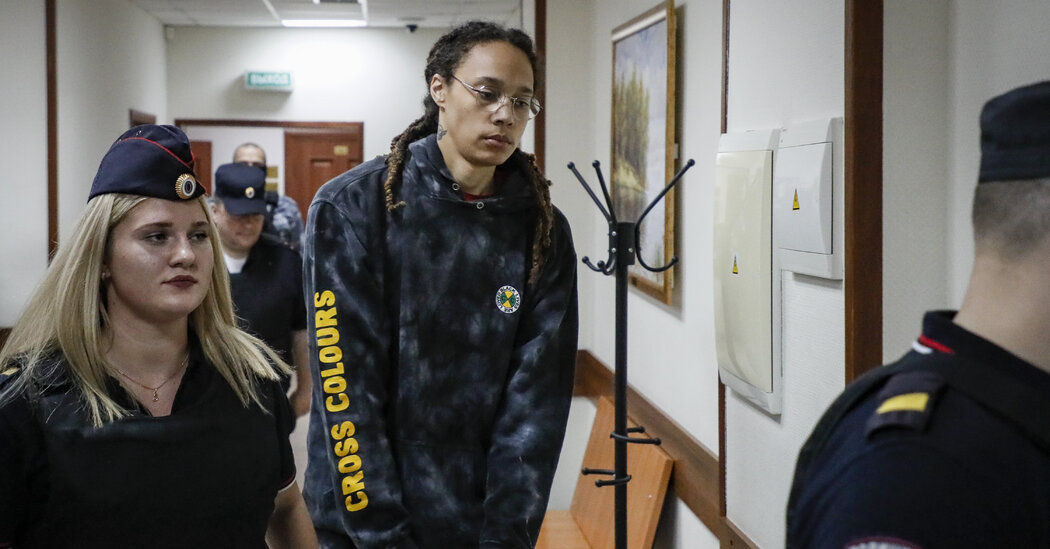 Wearing a black and gray sweatshirt with the slogan “Black lives for peace” printed on the back, Brittney Griner, the W.N.B.A. star who has been detained in Russia on drug charges, appeared in a court near Moscow on Tuesday as her defense team continued to present evidence that she had not intended to break the law.

She was escorted to a courtroom by a group of police officers, one of them wearing a balaklava, and stood in a metal cage, holding photographs of her relatives, teammates and friends, according to video footage from the scene published by Russian state television.

After being detained in a Moscow airport one week before Russia invaded Ukraine in February, Ms. Griner has become an unlikely pawn in a diplomatic game between Moscow and Washington. With her guilty plea making the verdict seem a foregone conclusion, experts said that her best hope was that the Biden administration could find a way to swap her for a high-profile Russian being held by the United States.

During court hearings, her defense team argued for leniency, saying that Ms. Griner had not intended to smuggle drugs into Russia and that, like many other international athletes, she had used cannabis to help ease pain from injuries.

A narcology expert testified in court on Tuesday, Ms. Griner’s lawyers said, to present a case that in some countries, including the United States, medical cannabis “is a popular treatment, specifically among athletes.”

“With the prescription in place, Brittney may have used it for medical, but not for recreational purposes,” said Maria Blagovolina, one of Ms. Griner’s lawyers and a partner at Rybalkin, Gortsunyan, Dyakin & Partners, a firm in Moscow.

At the previous hearing, the lawyers presented a note from Ms. Griner’s doctor recommending cannabis to treat her pain. Ms. Griner was also expected to appear in court on Wednesday, when she could be called to testify.

Ms. Griner had traveled to Russia because she played for a team in the country to earn extra money during the off-season. Russian customs officials discovered two vape cartridges with hashish oil — a cannabis derivative — in her luggage.

Ms. Griner was taken into custody near Moscow and accused of willfully smuggling the vape cartridges, a charge that can carry a sentence of up to 10 years in prison.

On July 7, Ms. Griner pleaded guilty to the charges, saying that she had unintentionally carried a banned substance into Russia because she had packed in a hurry. The Russian authorities have signaled that no possible exchange can take place before a verdict in court.

American officials have said that they are doing all they can to return Ms. Griner home, arguing that she was wrongfully detained. Last week, Maria Zakharova, spokeswoman for the Russian Foreign Ministry, said that such statements were “political, biased, and illegitimate.”

“If an American citizen was detained on drug trafficking charges and she does not deny it herself, then this should correspond to Russian legislation, and not to the laws adopted in San Francisco,” Ms. Zakharova said.