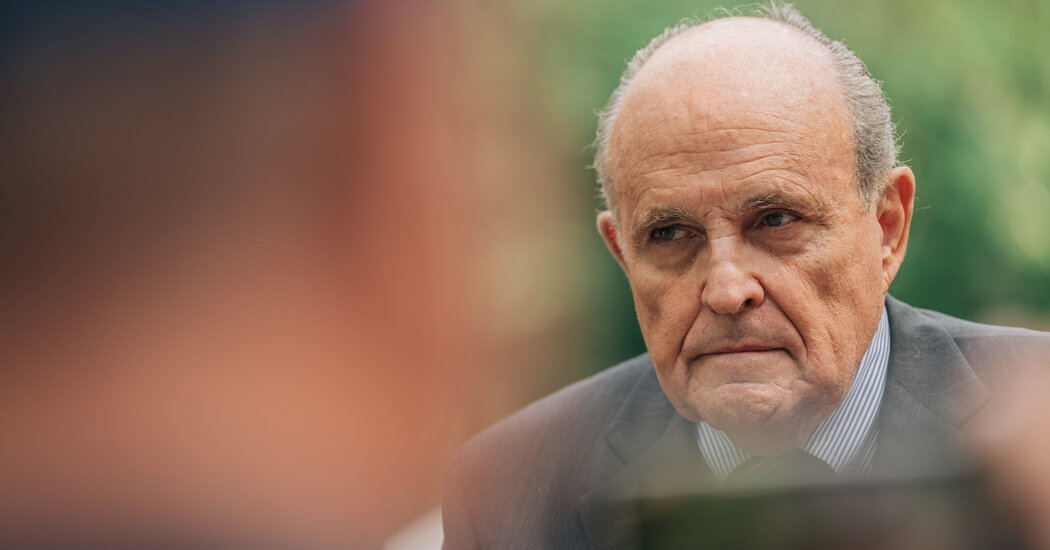 A judge in Atlanta tentatively ordered Rudolph W. Giuliani to appear before a special grand jury investigating meddling in the 2020 election.

ATLANTA — Rudolph W. Giuliani, the lawyer for former President Donald J. Trump and a central figure in the investigation into election interference in Georgia, has been telling prosecutors that he cannot travel to the state to appear before a special grand jury because he is not healthy enough to fly.

But on Tuesday, a judge in Fulton County, Ga., said that Mr. Giuliani, who had two coronary heart stents implanted in early July, could travel from New York to Atlanta some other way, and tentatively ordered him to show up to deliver in-person testimony on Aug. 17.

“Mr. Giuliani is not cleared for air travel, A-I-R,” Judge Robert C.I. McBurney of Fulton County Superior Court said. “John Madden drove all over the country in his big bus, from stadium to stadium. So one thing we need to explore is whether Mr. Giuliani could get here without jeopardizing his recovery and his health. On a train, on a bus or Uber, or whatever it would be,” he said, adding, “New York is not close to Atlanta, but it’s not traveling from Fairbanks.”

In a hearing on Tuesday afternoon, the judge also told prosecutors they should let Mr. Giuliani, 78, know whether he was a target of the criminal investigation. The office of Fani T. Willis, the Atlanta-area district attorney, has already told at least 17 other people, including a pair of state senators and the head of the state Republican Party, that they are targets.

If Mr. Giuliani is considered to be a target, that could prompt him to invoke his Fifth Amendment right and decline to give testimony after potentially making a lengthy road trip. Letting Mr. Giuliani know in advance, the judge said, would give some clarity on “what impact that has on the extent of his time in front of the grand jury.”

Who is under scrutiny? With the help of a special grand jury, Ms. Willis has subpoenaed several of Mr. Trump’s allies, including Rudolph W. Giuliani, who has emerged as a central figure in the case. Mr. Giuliani spearheaded efforts to keep Mr. Trump in power as his personal lawyer.

The judge also said he could reconsider the Aug. 17 date if Mr. Giuliani’s doctor produced a sufficiently compelling medical excuse.

William H. Thomas Jr., a lawyer for Mr. Giuliani, said in the hearing that his client would be open to a remote interview via Zoom. Nathan Wade, a special prosecutor working for the district attorney, said the office was not interested and preferred that Mr. Giuliani appear in person.

Mr. Giuliani’s role in the effort to reverse Mr. Trump’s 2020 election loss in Georgia is of interest to Fulton County prosecutors for a number of reasons. As part of the closed-door grand jury proceedings, they have questioned multiple witnesses about Mr. Giuliani’s appearances before a pair of state legislative panels after the 2020 vote, in which he made a number of false allegations of election fraud. Mr. Giuliani, the former New York mayor, also participated in a scheme to create slates of fake, pro-Trump presidential electors in a number of swing states. The convening of these electors in Georgia is another subject of Ms. Willis’s investigation.

Mr. Giuliani’s lawyers had sought to delay any in-person appearance in Atlanta and produced a doctor’s note this week advising him not to fly anywhere because of the stent procedure. Ms. Willis countered that Mr. Giuliani had recently traveled out of state to New Hampshire and had also purchased plane tickets to Europe.

Judge McBurney said Mr. Giuliani had plenty of time to get from New York to Atlanta, suggesting that he could break up a 13-hour road trip into segments. “Maybe he goes down to Washington, as the first part, and reconnects with people there, and then travels another few hours.”

Bigg Boss 14: Rakhi, Arshi and others break down as Vikas Gupta exits the...

67,864 hectare crop wasted due to rain in Andhra