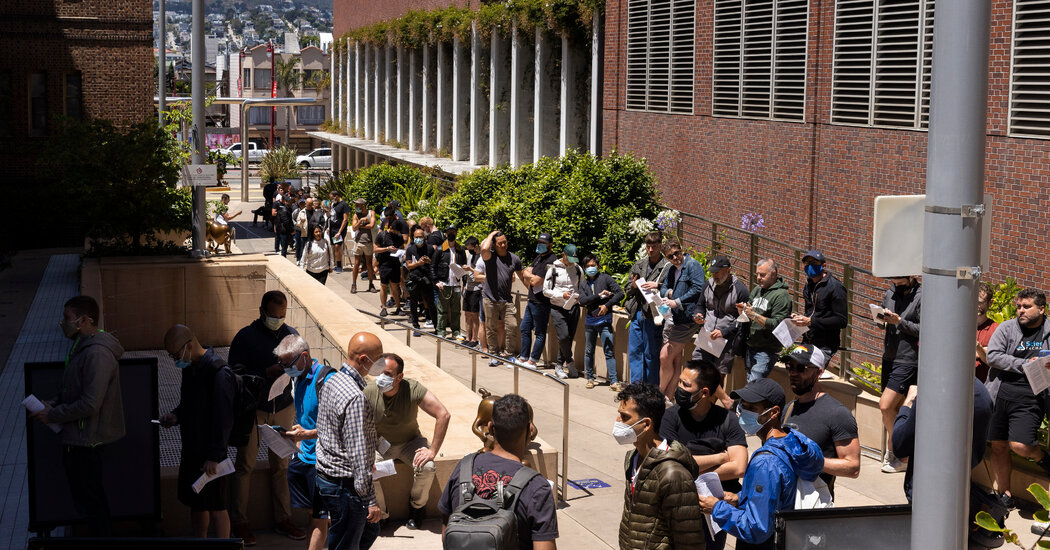 Three states have now issued emergency declarations in the past week, as have New York City and San Francisco.

SACRAMENTO — Gov. Gavin Newsom of California declared a state of emergency on Monday to address a monkeypox outbreak, making the state the third in four days to elevate its public health response to the rapidly spreading disease.

The declaration followed similar actions by New York on Friday and Illinois on Monday, and by the city of San Francisco on Thursday. Mayor Eric Adams of New York also declared a local emergency on Monday.

“California is working urgently across all levels of government to slow the spread of monkeypox, leveraging our robust testing, contact tracing and community partnerships strengthened during the pandemic to ensure that those most at risk are our focus for vaccines, treatment and outreach,” Mr. Newsom said in a statement.

“We’ll continue to work with the federal government to secure more vaccines, raise awareness about reducing risk and stand with the L.G.B.T.Q. community fighting stigmatization,” he added.

The moves, which help streamline and coordinate the monkeypox response among different levels of government, come amid an uptick in infections as well as increasingly vocal complaints about the public health response.

What is monkeypox? Monkeypox is a virus similar to smallpox, but symptoms are less severe. It was discovered in 1958, after outbreaks occurred in monkeys kept for research. The virus was primarily found in parts of Central and West Africa, but in recent weeks it has spread to dozens of countries and infected tens of thousands of people, overwhelmingly men who have sex with men. On July 23, the World Health Organization declared monkeypox a global health emergency.

Who can get the vaccine? Jynneos vaccine is most commonly used to prevent monkeypox infections, and consists of two doses given four weeks apart. It  has mostly been offered to health care workers and people who have had a confirmed or suspected monkeypox exposure due to limited supplies, though new doses should become available in the coming months. A few states, including New York, have also made vaccines available among higher-risk populations.

Nearly 6,000 cases of monkeypox have been reported nationally since May, according to the Centers for Disease Control and Prevention, with nearly half of them reported in California, Illinois and New York. The World Health Organization has already declared the virus to be a global health emergency.

No deaths have been reported so far in the United States, and monkeypox is rarely fatal, but the rash caused by the virus has led to intense pain in some patients. The virus spreads primarily via prolonged physical contact, but it can also be transmitted via shared linens and clothing, health officials say.

Men who have sex with men have so far made up about 99 percent of the confirmed cases. Public health officials emphasize that the virus can spread to anyone who has prolonged skin-to-skin contact with a person who has the rash.

The U.S. case count is among the highest in the world, and health officials say the figure is almost certainly an underestimate.

Federal health officials say they have not yet declared a health emergency at the national level in part because monkeypox is a known disease with tests, vaccines and treatments available.

But as the virus has spread and scientists have gathered research, the emerging picture has been a bit more complicated than in past outbreaks, and pressure has intensified for more aggressive measures.

“We don’t control public health in the 50 states, in the territories and in the tribal jurisdictions,” Xavier Becerra, the secretary of health and human services, said in response to a reporter’s question about whether the virus could be eliminated. “We rely on our partnership to work with them. They need to work with us.”

Mr. Pritzker added that the effort would “ensure our L.G.B.T. Q.+ community has the resources they need to stay safe while ensuring members are not stigmatized as they access critical health care.”

IPL 2021 | 'Mahi bhai told me Harshal Patel will bowl outside down: Ravindra...

Mouni Roy: Bhagwad Geeta must be part of school curriculum