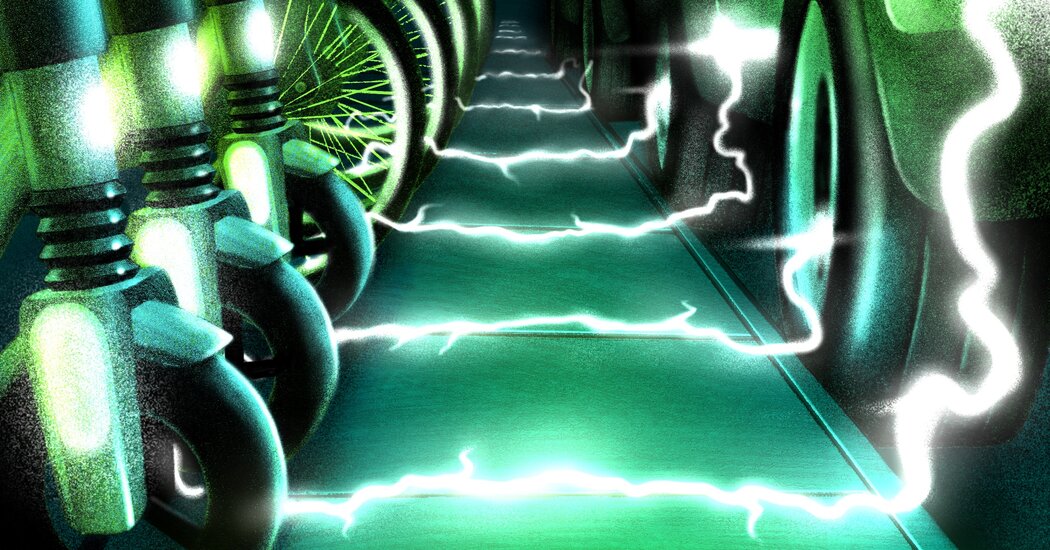 We’re asking our streets and sidewalks to do more and more. Start-ups are trying to help with curbside management tools — but will cities rise to the challenge?

This article is part of our series on the Future of Transportation, which is exploring innovations and challenges that affect how we move about the world.

Picture an average day on a busy city street. Start with the morning rush: trucks unloading their goods; buses unloading passengers; pedestrians and cyclists weaving through traffic; drivers searching for parking; taxis ending their rides or beginning them. The rhythm continues throughout the day, with Amazon vans, ride shares and couriers all taking up curb space.

In short, the curb has never been busier. Cities are asking their streets to do more to contend with the booming demand for online delivery, app-based rides, outdoor space and a dizzying array of nonvehicular alternatives. And the pandemic has only intensified the situation.

Enter the world of curbside management. As congestion grows, cities have increasingly looked to tech companies to create flexible systems that quickly respond to the ever-changing needs of a street, even in a single day or hour. Supporters say new tools that can more accurately analyze the use of curb space (the “smarter curb” model, as it is called) could reduce traffic, lower carbon emissions and encourage greener modes of travel. Yet while results are promising, age-old problems persist.

Populus, one of the companies embracing that model, uses GPS tracking as its weapon of choice. The platform receives locations of vehicles (where and when they are parking) as well as historical batched trip data (parking patterns over time). Populus then maps a city’s street grids with what it calls “parked events,” enabling cities to better visualize how they could change curb regulations based on demand.

So, for example, if a stretch where dozens of deliveries happen could indicate a need for a commercial loading zone. Or if a certain corner attracts an unusual number of bikes and scooters, the data might point to the need for a parking corral or even a bike lane.

“Most cities didn’t have access to very good data,” said Regina Clewlow, the chief executive and co-founder of Populus. “If they were collecting it, it would be expensive and very manual. So this data is incredibly valuable.”

The company now works directly with over 100 cities and incorporates fleet data from 40 different private operators, like ride-share and delivery companies. In several cities, the companies are either required or can choose to pay ‌‌Populus directly to use the city’s designated curb spaces, rather than have each driver pay a meter or risk a ticket from double parking. The city’s traffic enforcement agents, using Populus’s platform, can see on hand-held devices if a company paid or not. In Seattle, ‌‌ride-share companies use this framework, and it now applies to the likes of Amazon in Oakland, Calif.

Populus offers a tiered pricing system, where the city pays a fee to access the platform and then a percentage of any new net revenue that they were able to collect by using it. Ms. Clewlow says the system allows cities to better monetize the curb and is more cost-effective than one of tickets and enforcement. It also allows cities to better monetize the curb. “That usually costs 50 percent to sometimes more than 100 percent of revenue collected,” she said.

Another option is cameras — the specialty of the company Vade. Matty Schaefer, its chief executive and co-founder, describes the company’s pitch to cities in simple terms: “We put cameras up on poles and see what’s happening at the curb.”

The wireless, solar-powered devices snap an image every 30 seconds. Using artificial intelligence that draws data from those digital images, the system then marks ‌‌the start and end time of when a vehicle is occupying a space. The data offers “ground truths of curbside activity,” Mr. Schaefer said.

“We can actually tell cities, ‘Here’s your breakdown,’” he said, adding a hypothetical scenario: “Eighty percent of the time, people are paying for extra time they don’t use, versus 20 percent who are overstaying.”

In Sarasota, Fla., the cameras found that on Main Street and its side streets and alleyways, most passenger vehicles were parking for 15 minutes or less. The recommendation: Swap a few metered parking spots out for short-term loading.

A more theoretical example: If a block of restaurants hits near-full occupancy every day during lunchtime, a city could spike parking prices there and lower them on adjacent blocks to lure traffic elsewhere. But this solution would pose logistical challenges for many cities.

“The curb is the bottleneck. Everything else, from navigation to payment, has been digitized,” Mr. Schaefer said. “It’s still just a fact that you get there and have to use your eyes to find a spot, and officers still need to print a ticket and put it on the windshield.”

The future, he imagines, is an “ambiguous curb” with no zones but rather an option: to park or not to park, an option or price that fluctuates based on that day’s activities and the city’s priorities. The implementation of that approach, though, is complicated; Mr. Schaefer called it a “fascinating technical problem.”

For now, the company offers various packages. A “full-service” subscription with Vade, which includes the camera setup and billing, costs up to $2,000 a year per camera with a multiyear contract, or roughly up to $5,000 a block. Prices vary, Mr. Schaefer said, based on use and custom work.

The third approach is sensors. They were used in SFpark, a dynamic pricing program in San Francisco that proponents often cite. The pilot, which ran from 2011 to 2013, increased parking revenue and cut the amount of cruising — cars searching for spots — in half. (While estimates vary, at least one study suggests that cruising for spots make up about a third of all traffic.)

Pebble, a product of Sidewalk Labs, which is part of Google, offers similar devices that are placed in parking spaces.

“Businesses and trucking companies working with the city have access to a mobile app, informed by insights from Pebble, that helps truck drivers find, reserve and route directly to parking spaces,” said Willa Ng, the partnerships and strategy lead at Sidewalk Labs.

In January, Pebble absorbed Coord, the company that began temporary‌ “smart zone‌” ‌pilots with cities like Nashville and Aspen, Colo. In Aspen, nearly 40 fleets of truck companies signed up for the service, and the zones were used more than a thousand times in the first 100 days. That participation resulted in a 23 percent reduction in illegal parking, Ms. Ng said, and passenger vehicles spent up to 90 percent less time in smart zones. Another Pebble pilot is expected to begin this year, though the company would not say where.

“Cities frequently oversupply parking because they believe a ‘good’ parking experience for drivers is one where there is ample parking,” Ms. Ng said. “If we can match drivers to a space before they arrive, they can have a good experience, and we can help cities reclaim some of that space for better use.”

According to a Google spokeswoman, each city’s smart zone contract is different, based on the number of sensors and the local policies that affect operation. Pebble works with each city to determine its needs, which then forms the budget. (Google doesn’t share the cost of the pilots, the spokeswoman said.)

But the drive for ‌“smart city‌” technology, ‌‌including curbside management, often confronts offline realities, particularly enforcement. Cameras could help, but they often generate privacy concerns. And then, there is an unspoken rule of city planning: Parking is political, no matter the data.

In May, advocacy groups for safe streets and major delivery companies, like UPS and DoorDash, sent a letter to the offices of New York City’s mayor, Eric Adams. It urged City Hall to prioritize uses of the curb that “provide the greatest amount of access and serve the highest number of people.”

“All of these companies are trying to do business in New York City,” said Sara Lind, the director of policy for Open Plans, the group that organized the letter. “But they are really struggling because our curb space is totally unmanaged at present.”

The first step is inventory, Ms. Lind said, and data provided by the ‌start-ups can help. But cities must step up and act, she added.

“Until we have the political will to say that the curb should not just be for the free storage of private vehicles, this technology won’t be effective,” she said. “We won’t be able to reuse that space.”

PM Modi to interact with CMs over vaccine rollout, COVID-19 situation across states